I apologize as this is longer than I like to normally post, but there are points to be hammered home here.  The hour is late and the situation is dire…

In Greek mythology, Scylla and Charybdis were supernatural monsters who worked together destroying ships that attempted to pass through a narrow strait. Very few ships managed to thread that needle to evade both and thus achieve safe passage.

I look around and see not two, but multiple beasts slavering to devour us as we navigate through treacherous waters into the future.

Unless one is firmly connected to the enemedia teat with no room for any other information input, one cannot not grasp that the supply chain is strained.  And getting more strained. A selection of quick-hit links:

The supply chain is so f*cked

Before They Were An Inconvenience, But Now The Shortages Are Really Beginning To Sting

Supply chain disruptions: the ripple effect, and what we can do about it

Leftist policies are wrecking global supply chains and triggering shortages and looming hyperinflation. Stand by for capitalism to be blamed

The bottom is about to fall out

Nearly 80,000 shipping containers are piled high in the Port of Savannah, a report says, as the supply chain crisis shows no sign of stopping

I was at Market Basket yesterday – again on a quest for my kids’ favorite box juice brand – and pretty much the entire box juice shelves were filled with… bottled water.  Further down the same aisle to other juices, the bottles were on the front of the shelves, with nothing behind in a clear attempt to mask the stock shortfall.  Walmart, along with many stores I patronize, is showing strains.  And this video should send shivers up your spine (HT Surak):

I can corroborate the pharmacy waits.  I had to fill a scrip for one of my kids recently and had to wait almost a week for delivery.  Multiple other times I’ve had to return to the pharmacy when they’ve got my full 90-day scrip as they didn’t have enough to fill it then-and-there.  Up until – spitballing here – a year or so ago that was never a thing.  Now, regularly.

Across the board heating fuels and electricity generation are threatened, and not just in the US (link in the original):

Looks like the whole damn world is running short on electricity this winter.

I wonder why that is. You think all the liberal mental disease might have something to do with it?

China is running short, Lebanon ran out, UK and Europe are running low.

And now India. 70% of their power is by coal. And most of those plants only have 1 to 4 days supply left.

It should serve as a “turning point for India,” where there is ample renewable energy potential to help offset such disruptions

“We’ve actually had discussions with power utilities who are concerned that they simply will have to implement blackouts this winter,” Thrasher warned.

He said, “They don’t see where the fuel is coming from to meet demand,” adding that 23% of utilities are switching away from gas this fall/winter to burn more coal.

In my household I just had my propane tanks filled for the coming “dark winter”.  Holy carp but prices have skyrocketed.  In living in this house for about a decade I don’t think the price has ever exceeded $400 for a fill-up.  Now, it was just about double that.  This fuel crisis is global.

An Israeli hospital is struggling to restore full functionality.  What did Klaus say about the “possibility” of massive cyberattacks in the near future?  Incidents are going up.

It’s a simple and straight-forward calculation to grasp that higher fuel prices affect us not just at the pump, but in every physical good we buy (not to mention the energy costs affecting even computer services): 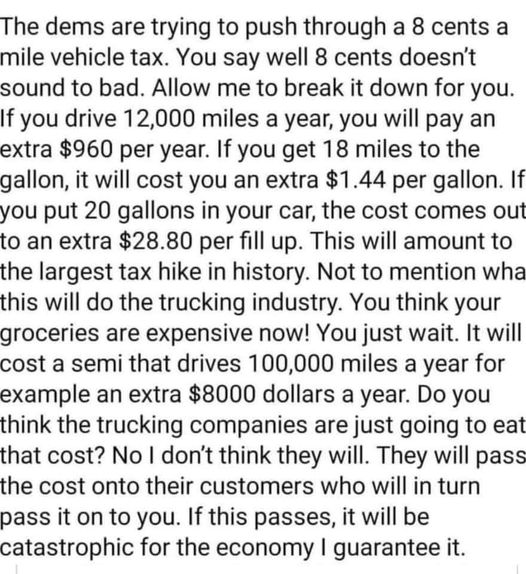 Higher taxes, as the Left demands corporations pay their “fair share”, will also be passed through.  And of course it’s beyond stupid to believe President Post Turtle when he says tax hikes will only affect “the rich” (bolding added).

Even the left-of-center Tax Policy Center estimates 20% of the burden of higher corporate taxes will be directly borne by labor in lower wages, with the rest paid from depressed investment returns (dividends, interest, capital gains: the very assets of your pension and 401(k) funds).

So, here’s what appears to be happening. Hiding behind our healthy skepticism of inflammatory political speech are the largest spending and tax increases ever.

As mentioned in the video above, and again in myriad places, food prices are rising.  We will be squeezed between higher prices and higher taxes.

Biden’s Inflation Now Costs Families $2.1K A Year And About To Get Worse

And closing out this section, you’re being conditioned for permanent scarcity:

Note how “Before Times” is emphasized by its seemingly otherwise unnecessary capitalization.

The dystopian language appears to be another way of socially engineering Americans to accept “the new normal,” which will include rolling lockdowns, energy crises and food shortages.

It’s not even worth attempting to link to the staggering job losses in the last year or so, never mind the firings because people value their lives and refuse to get The Jab.  But this leaves many unemployed with fewer opportunities – and doubtless scant ones that offer anything close to equal pay as the position they lost.  Ironically, even as President Potato touts companies going full Fascist, the labor force is being crushed.

Rabo: Just Wait Until We See The Impact Of Forced Vaccine Mandate Layoffs On The Labor Force

And firing doctors and nurses… can we say health care crisis?

Leave us not forget the drastically rising crime rates.  Not to mention the open border with hundreds of thousands streaming in.  Plus a lack of law enforcement at the border and within.  As one radio ad said, “Every state is now a border state”.

Video: $100 Million Border Wall Discarded in Field While Biden Still Pays Contractors to Not Build it

Not to mention police walking off the job due to a hostile work environment.  And all around America and Europe, the Islamic invaders take over:

Germany: Cologne to Allow Muezzins to Call for Prayers

FRANCE: Conservative politician under fire for stating that French natives are being ethnically cleansed by Muslim invaders

Biden admin released over 160,000 migrants into US since March

The election of a new population is in full swing.  This is how the Left plays its Long Game. 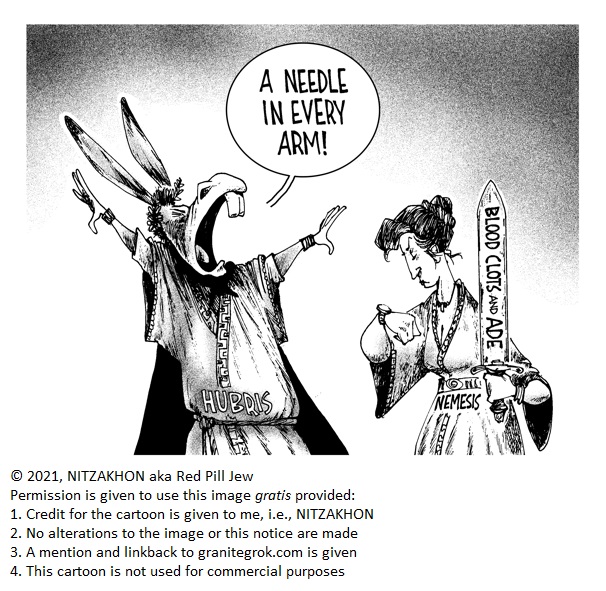 As we re-enter cold and flu season and, doubtless, the closer proximity and greater indoor time facilitate the inevitable spread of Delta or whatever other variants of Covid there are, it’s very likely that we’ll see this in spades.  Just look at Singapore as one example (but globally the higher the vax rate the higher the cases): 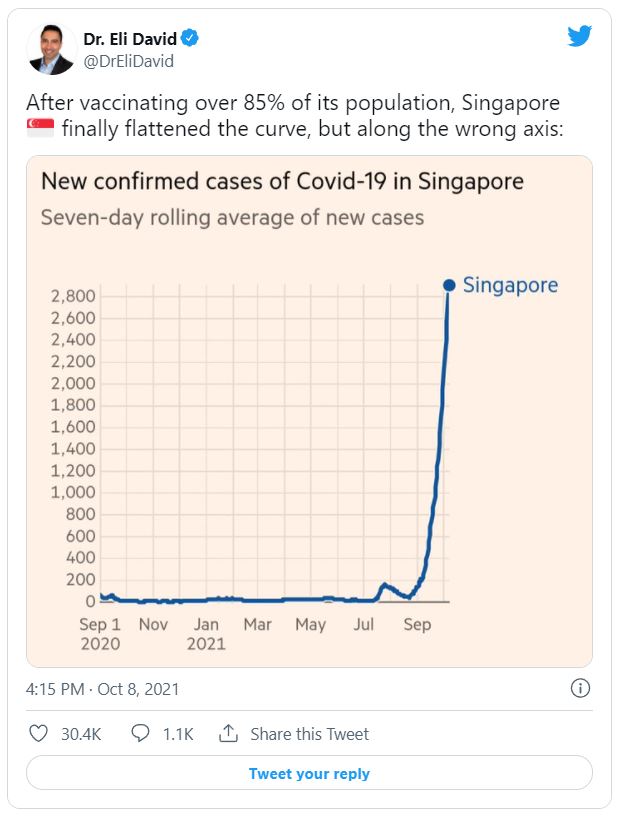 Students are threatened with arrest if they don’t show a Vaxport.  Nor can you travel without your mark; another example.

Meanwhile, seeing utter contempt for the law from above, people are resisting by outright faking Jabs.  And it will never end until you submit.  If you don’t, no life-saving medical care for you.  Child abuse like this is called “normal” (warning, graphic picture at the link, bolding added):

A young girl eager to return to school needs a nasal swab test. Her Mom says 30 minutes after returning home, she was bleeding from her nose…and an eye. Hospital staff allegedly stated this is “normal.”

Note to parents: If you tell the clinic that symptoms have only started a few days ago odds are good you can ask for and get the “rapid test” just around the opening of the nostrils rather than the deep and invasive one.  Just found that out the other day.

No Jab, No School: UK Threatens to Bar Unvaccinated Children From Face-to-Face Learning

Meanwhile, as resistance to Jab tyranny grows, the focus switches to renewing the climate scare:

I have been closely watching the Chinese markets for the Evergrande fallout. The world’s markets will collapse based on this one pyramid scheme. And this collapse will happen quickly and soon. Our markets have been down for the past four trading sessions but the price of gold will also be a key indicator.

I have long maintained that the world is such an intricately interlaced house of debts-and-IOU-cards that when it goes, it’s ALL going to go flat.  Combining Ann Barnhardt and Robert Heinlein into my own take:

The only assets you truly own are those you can hold and/or carry, plus successfully defend.

Multiple cycles are converging at the bottom – which I believe is deliberately engineered.  Remember the goal: a scared, dispirited, and desperate global population who will surrender freedom and autonomy.  And with all the above, the billions of people having the peace of the grave will happen.  Editing the quote I cited in Hungry Wolves and Darkened Campfires:

The campfire is being extinguished.  The wolves are closing in.

I feel like a broken record, but… tempus fugit.  Time is short.  Do what you can to prep and build alliances.

Hashem help us all.