Fear is the Mind Killer… - Granite Grok
Skip to content

“I must not fear. Fear is the mind-killer. Fear is the little-death that brings total obliteration. I will face my fear. I will permit it to pass over me and through me. And when it has gone past I will turn the inner eye to see its path. Where the fear has gone there will be nothing. Only I will remain.”

At the beginning of this, with Chinese videos of people walking down the street and collapsing, and apartment doors purportedly being welded shut, I too was afraid. I wore nitrile gloves, N95 masks, sanitized my gloves and then hands like insanity, wiped down shopping carts, and in general was terrified like most everyone else.  This was an unknown unknown, and I believed caution was called for.

THIS IS DREAD, MAN, TRULY DREAD

As I touched on in Quick Takes – Hat Trick (link in original, bolding added):

But in a fascinating book about survival, The Unthinkable: Who Survives When Disaster Strikes – and Why, I learned that people make huge errors in assigning actual risk levels.  One of the factors is dread.  Relentless dread overrides saner, calmer risk assessments.

Dread has an enormous impact on behaviors.  I just finished The Savior Generals by Victor Davis Hanson.  In it, he discusses five wars that seemed lost and the military leaders that stepped forth and saved them.  A specific thing from his conclusion about common elements of the five situations was that dread of an enemy that seemed unstoppable at the time was a critical factor to the dire state they were in (bolding added):

Some enemies are not just formidable but abjectly terrifying.  Before the victory at Marathon, the Greeks, or so the historian Herodotus remarked, feared even to look upon the Persians. … The chronically outnumbered Byzantines likewise felt such apprehension….

By 1864, a growing number in the demoralized North were beginning to believe the myth that the South simply had bred a better warrior class… In Korea, the sudden influx of hundreds of thousands of Communist Chinese created sheer panic among American troops.  [In Iraq] many in America felt there were simply few antidotes either to suicide bombers or improvised explosive devices…

What is remarkable in all these cases was how little such dread affected generals like Themistocles, Belisarius, Sherman, Ridgway, and Petraeus.  They did not belittle their enemies’ fighting prowess, but simply saw that their own side’s prior problems were not due to larger-than-life foes…

In the next paragraph of my Quick Takes piece, I said this (CAPS in original, bolding added):

Between unremitting terror being pumped into us, the ever-shifting “science” of masks, the lockdowns, then lifted, then reimposed, etc., creating confusion, people just throw up their hands and scream I’LL DO WHAT YOU WANT JUST MAKE IT STOP!

So, thanks to a comment on GraniteGrok (somewhere), I watched this video.  Astounding.  You must watch it.  And then share it widely – and if someone knows how to download it please tell me in the comments.  I have a feeling it will get disappeared soon.

If you don’t watch this and say HOLY SH*T! this is precisely what they’re doing to us, roll back over and go to sleep in peace.

One of the things it discusses is escalating pulses of fear as a part of conditioning people to accept tyranny, as well as constantly changing doctrine on what is “right” and “not right” to sow confusion.

So now that the Delta variant is receding, and people have hope from Ivermectin and monoclonal antibodies, and data is coming out that the Jab is more dangerous than thought especially for children (also see here and here), less effective and shorter-lived than thought, and so on… here comes MU:

So when we say we’re keeping an eye on the Mu Variant, we want to make sure it doesn’t become more dominant. We actually don’t know what the consequences would be. The concern is that it has a few a constellation of mutations that would indicate that it might evade the protection from certain antibodies. That’s what we mean when we say we’re keeping an eye on it, but right now, it is not an immediate threat, even though we take all of these variants very seriously. 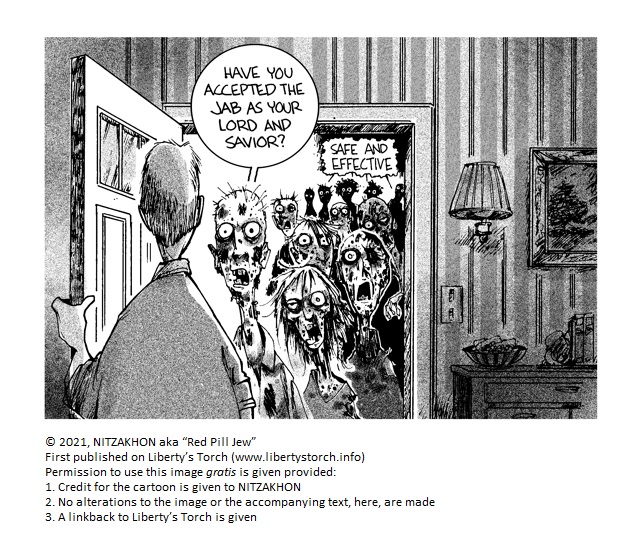 And through Surak’s latest (and I appreciate his HT to me) are these three pieces about the Covidian Cult:

Teaser excerpt from the first one (bolding added):

One of the hallmarks of totalitarianism is mass conformity to a psychotic official narrative. Not a regular official narrative, like the “Cold War” or the “War on Terror” narratives. A totally delusional official narrative that has little or no connection to reality and that is contradicted by a preponderance of facts.

Nazism and Stalinism are the classic examples, but the phenomenon is better observed in cults and other sub-cultural societal groups. Numerous examples will spring to mind: the Manson family, Jim Jones’ People’s Temple, the Church of Scientology, Heavens Gate, etc., each with its own psychotic official narrative: Helter Skelter, Christian Communism, Xenu and the Galactic Confederacy, and so on.

Looking in from the dominant culture (or back through time in the case of the Nazis), the delusional nature of these official narratives is glaringly obvious to most rational people. What many people fail to understand is that to those who fall prey to them (whether individual cult members or entire totalitarian societies) such narratives do not register as psychotic. On the contrary, they feel entirely normal. Everything in their social “reality” reifies and reaffirms the narrative, and anything that challenges or contradicts it is perceived as an existential threat.

This echoes this author’s writings on the Left being a cult (and IMHO likely insane, here and here).  And what did I say, early on in my blogging career, about The Leftist Sense of Self?

Even as China builds new coal plants at an astonishing rate while we cripple our economy, and the UK’s “green” grid fires up a coal plant to deal with power shortages, it’s fear fear fear.  What’s next, an alien invasion?  Just wait!  Stock market correction to introduce yet more financial fear… coming?  And do you think the idea of somehow artificially-induced Yellowstone (video 14 minutes) eruption has not entered their minds, or other natural global disasters?  I’m just a guy – if I can think of it, they can too.  They’re mad, but the line between madness and genius has always been a fine one.

Anyone looking at the gas pump knows what inflation is.  Let alone shipping costs.  Let alone food prices.  Or housing prices.  Inflation is not going to be a “temporary” blip but is ramping up to – without any doubt IMHO – hyperinflationary territory.  Coming soon in the greenback? 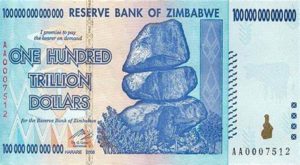 Meanwhile, crime is escalating.  Whites are under attack, The borders are open with who knows who is coming in.  And we’re flying in unvetted Afghans by the metric f*ckton – Europe’s already seen this movie and no doubt their experience will repeat here.  CRT and Leftist activism and other social experiments have ruined our schools.  Consider this, from Bill Whittle:

Faith in America worldwide has crumbled, and thus Pax Americana ends, with China buzzing Taiwan and Iran on the verge of a nuclear breakout and China, Russia, and Iran working together in the American collapse – and there are so many things being done by President Asterisk The Real Powers in Charge that many are concluding the Afghanistan debacle, to name one thing among legion, was deliberate.  I agree 100%.  See also Biden Transforms America from Force of Good into Force of Evil.

Go back to my quote from a prior piece about making it stop, and cross-check that with the video and the three-part cult essay links.  The goal is simple: create such an unruly, desperate, dangerous, and unstable world that everyone will cry out a la this quote from a Dostoevsky book:

Remember, they WILL make you Communist to create utopia, or they’ll make you dead to fight climate change.  And for 90%+ of the world that needs to be sacrificed for this brave new reset, well, to make an omelet you gotta break some skulls, er, eggs, right?

Pray.  Prep.  Find your steel and get ready.  Others are (bold and italics in original):

When [Leftists] would rather burn the country to the ground than let the rest have it, despite their own serial failures at governance in every endeavor attempted for a century and more, it’s time to begin the culling of those enemies, in a Roman fashion, and with Carthaginian finality.

Nothing less will any longer suffice, as if it ever could or would have.

There will be no Appomattox this time.

When it’s over, one side will exist, and the other side will be – and must be – wiped off the face of the planet. With a fearsomeness and exactitude that will be retold for 10,000 years, and frighten the children of generations as yet unborn.