As over 4,000 missiles were flying from Gaza towards Israel in a barrage that no country should endure or would be expected to endure were it any other country, I spoke with one of my best friends over there.  This was around the time I wrote this topical piece at Liberty’s Torch.

He mentioned the missiles, but his bigger concern was the Arabs rioting in-country. Muslims were swarming to commit acts of violence towards Jews.  In Judea and Samaria defense posts and settlements were as armed-up as possible given that Israel doesn’t have a Second Amendment*, and videos began surfacing of one-on-one attacks on Jews, of mob attacks on Jews, and even selfie-movies as cars roamed Jewish neighborhoods firing rifles out the windows randomly.

My friend has been subtly urging me to make Aliyah – move to Israel – and it’s been and occasionally is still being considered.  I understand that it would be a massive lifestyle change on multiple levels assuming I could get familial buy-in.  Immersing my kids in a Jewish monoculture would be good; having to give up a significant house with a nice piece of property to move into a smallish apartment would not.  And so on.

I love the words of Hativah (video, 1:58), the Israeli anthem, but I tear up whenever I hear the Star Spangled Banner.  I love America.

My family on my dad’s side has been here since well before the Revolution, my surname arrived somewhere in the mid-1600’s, and I have one confirmed Mayflower ancestor (and I’d bet money I have others should I ever get time to continue the genealogical effort).  I have two documented Revolutionary War ancestors, with two others awaiting similar time as above to verify, and again I have no doubts I’d add more beyond those four. 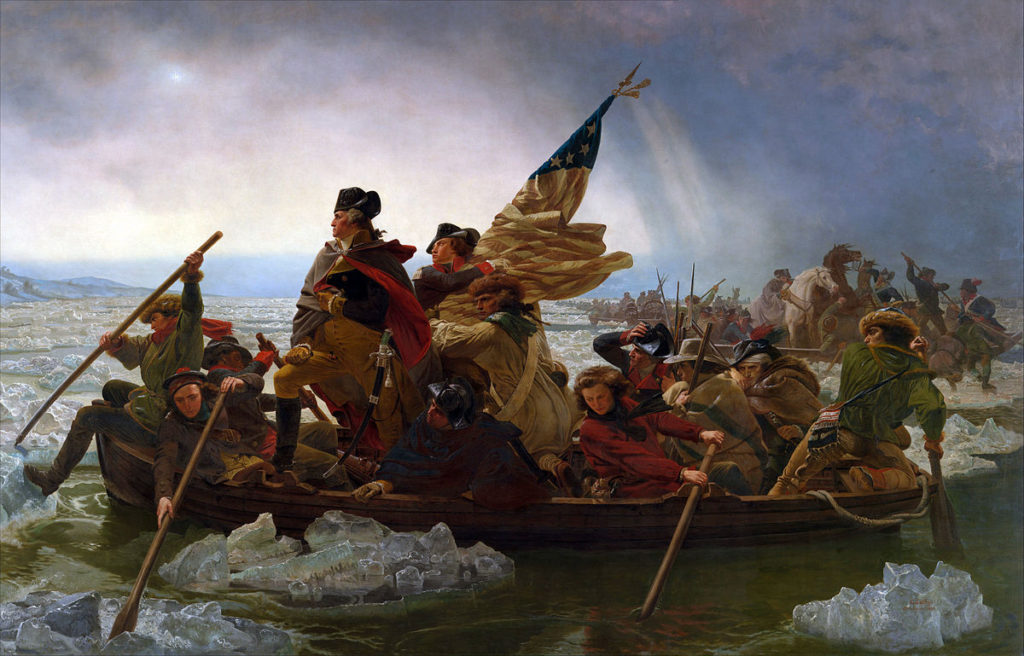 Yes, I’m making progress on learning Hebrew. Certainly, I want to go visit regularly once the Jab insanity has passed – not just for me but for my kids and their Judaism.  Assuming we’re not deep into civilizational collapse by then.

But as a part of his urging, he said “We need your guns…”  He added that people are rushing to get shooting instructions and permits and then going to buy guns, in a large part because they are seeing the police handling the rioting Arabs with delicacy and kid-gloves (sounds familiar).

My friend, a long-time Likud (right-leaning) supporter, said he didn’t know if he could support Netanyahu any longer because of this failure.  And that he was looking into getting a permit himself.

When I pointed out that I could not bring any of my guns, he said it would be OK – I could get more here.

WHAT DID HE REALLY WANT?

Early in the excellent TV sci-fi series Babylon 5’s arc each major civilization’s ambassador to the station was asked a question by the mysterious Mister Morden: What do you want?  Here’s that encounter with one of the best characters of the series, Londo Molari, ambassador from the Centauri Republic:

Like many of the seemingly simple questions in this series asked by ancient races, like Who are you? and Why are you here? there are layers upon layers of meaning.  Just as my friend’s statement “We need your guns” has a deeper meaning:

We need your fighting spirit.

In that same call, we talked about the Temple Mount, and both the Dome of the Rock and the Al Aqsa Mosque.  In an opinion that would have shocked me even ten years ago, I opined that those two things, built on our temple mount, needed to go.  He said “Soon”.  I was surprised because I agreed 100% with that and was inspired by the casual firmness in his voice.  I knew there was a reason I liked him.

No sane person wants a civil war in the US.  It’s likely coming regardless, whether over Vaxports, or by-force Jabs, or an economic collapse, or a race war, or myriad other possible causes.

Separation, as oft-discussed by many and as desirable as it might be in theory (and we’d definitely have to move in such an instance), is IMHO a fool’s errand as Aesop vigorously notes here and here.  And while a case can be made for separation, I think it cannot work in light of a single observation: The Left consists of Marxianic Missionaries determined to conquer America as their number one obstacle to their prophesized world utopia.

If America falls, they face no true resistance… well, other than Islam.  Although allies (see books here and here) for now, it’s definitely an alliance of convenience against the common Western-Civilization enemy.

Aside: In a global punch-out between a Socialist superstate and an Islamic one, who do you think would win?  I’d give the Islamic one the edge, simply for their sheer paradise-in-the-afterlife fanaticism.  What do you think?

Yes, the Second Amendment is an important item in resisting tyranny.  But, from mathematics, in opposing a tyrannical government, arms are NECESSARY but not SUFFICIENT.  The will to use them, the will to risk life, liberty, family, property, wealth, etc. – and to have sufficient numbers doing so – ah, that is the question.

In the movie Conan the Barbarian, Conan – who had attempted to sneak into sorcerer Thusla Doom’s camp to get revenge for the slaughter of his childhood village as Doom searched for steel years ago – has been made, captured, and tortured.  In that scene, Doom reveals that “steel isn’t strong, boy, flesh is stronger”.  It is the desire in your heart that is true strength.

Take a look at Afghanistan.  A “rag tag” army defeated the United States, albeit aided by an American enemedia and political party, nearly overlapping in a Venn diagram, determined to highlight every failure and downplay every success and a political class that IMHO in general never fought to win.

Their flesh beat our steel and our highest-of-high-tech weapons.  Because they were committed to win.  A determined, committed force with high morale and a belief in themselves and their cause, fighting on their home soil, won.  Such will often win, despite overwhelming odds – even F-15s and nuclear weapons </snark>.  (Related, here and a sequel here.)

I keep saying I don’t want The Switch thrown.  But if it does get thrown in the face of the increasing push for vaxports and other restrictions tightening (see these videos about denying healthcare and even economic participation to the unJabbed, here and here), CRT gets pushed into our kids against our openly-expressed wishes, personal carbon allowances hemming people in, secret investigations of political opponents ramped up, etc., do we have the steel to fight?

Are we purchasing Netflix and Twitter and all with chains and slavery, scared that we might – at the least – be canceled… let alone the possibility of worse?  The irony is that we still believe we have much to lose, even as the most basic thing of all – liberty – is being stolen as we are misdirected.  It can get so, so, so much worse than we think:

Find the steel within you.  Then find – very, very carefully – those with similar steel and fire**.  Your posterity needs you.  Your community needs you.  Your nations (all Western nations, and also others like India, Japan, Taiwan, etc. in the path of the Islamic and/or Socialist hordes), and civilizations, need you.

ACT!  Fight now with words and information, and with votes (for whatever they’re worth)… because the more awakened minds we have (like this one), the more support we will have when – alas, IMHO inevitably – we must take to the streets, rooftops, and fields in earnest. 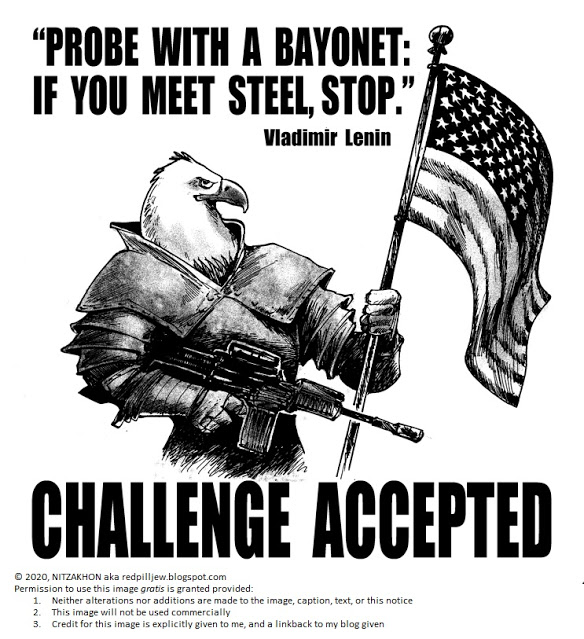 I DO NOT WANT CIVIL WAR!  I DO NOT WANT PEOPLE TO GO OUT AND START SHOOTING.  I fear, however, that the “awkward stage” is about over.  Alas is too weak a word.

America is at that awkward stage. It’s too late to work within the system, but too early to shoot the bastards. On the road to tyranny, we’ve gone so far that polite political action is about as useless as a miniskirt in a convent. … Something’s eventually going to happen. Government will bloat until it chokes us to death, or one more tyrannical power grab will turn out to be one too many. … Maybe it’ll be one more round of “reasonable gun control” or one more episode of burning children to death to save them from “child abuse.” Whatever, something will snap.

A quick closing aside: Fascist book is now highlighting that an interest in home canning and food preservation could be a sign of dangerous extremism.  They seem bound and determined to make us into obedient sheeple dependent on their largess.

The ideal citizen of a tyrannical state is the man or woman who bows in silent obedience in exchange for the status of a well-cared-for herd animal. Thinking people become the tyrants’ worst enemies.

* I recently took my children to their first firearms course – a gun safety course, and now have been bringing them to – at first – just learn safe handling and to not be afraid of guns.  I took videos and sent it to him and others; the in-laws overseas were amazed that kids could go shooting.  Another friend, also in Israel, said that it was so cool that America had gun rights like that.  For most people in Israel, their first official exposure to firearms is when they go into the IDF.

** I would love to find a local group, but most are already doubtless riddled with feds.  And, at this late date, anyone not compromised would probably think I was one.