Nitzakhon note: I am not really out of my hiatus mode but this is IMHO critical enough that I am putting it out anyway despite the risk to my personal situation.  This was started a couple of months ago, but in light of recent events vis a vis a potential new virus, plus other things happen globally, I wanted to get it out there ASAP.

I fear time is very limited before fit starts hitting the shan – overseas at first but definitely coming here too.

So cases of Covid are rising – one need merely pay scant heed to the enemedia to know this; indeed, one cannot avoid the clear attempt to make the panic porn rise again.  And, at least in the northern hemisphere, rising cases make sense even outside the increase in testing (after all, the more you look for something the more you’ll find it!): as winter comes people crowd indoors, don’t get as much fresh air or sunlight (vitamin D people!), and their exhalations into and breathing in drier air make for a riper transmission environment.  Add in the false comfort from people who have been Jabbed being given leave to not wear their ineffective-anyway masks… despite their being able to catch and transmit the virus and to do so with fewer, if any, symptoms.  Which IMHO makes THEM into the “superspreaders”.

So this is not only predictable but was predicted by many.  As are the resulting ADE incidents as the virus infects people more readily thanks to the previous Jab-created antibodies aiding the virus.

The more Jabs, the more cases:

And please do see his recent graphic-rich post too.

Before I begin, take a look at the “knowing glance” and smirk shared by Bill and Melinda Gates.  Watch it a couple of times.  If you don’t get chills at that, go back to sleep.

The next one?  I cannot fathom the mentality of smiling at the prospect of a pandemic.

Now let me attempt to be reasonable: pandemics are a real threat.  Ever since I read The Hot Zone when it first came out I have been worried about pandemics given our age of air travel.  An infected but not yet contagious or symptomatic person with, well, anything can be around the world in less than 24 hours and assuming they get through customs & immigration, out and spreading whatever-it-is.  Nairobi in Kenya to Tokyo in 24 hours?  Yes.  Lagos in Nigeria to O’Hare or JFK or LAX in 24 hours?  Yes.  So Gates’ warning does have merit:

“If anything kills over 10 million people in the next few decades, it’s most likely to be a highly infectious virus rather than a war,” Gates said during a 2015 Ted Talk. “We’ve actually invested very little in a system to stop an epidemic. We’re not ready for the next epidemic.”

SO WHAT WILL IT BE?

The link below goes to the website of a Chinese dissident, in hiding somewhere outside China. She produces very cutting-edge content and has access to well-placed sources. I cannot verify the contents of this video; I don’t know who the speaker is (but he seems to be Irish). It is less than 3 minutes long and should scare your socks off. He claims that the upcoming winter will be the most deadly in human history, because of a hemorrhagic fever called Marburg’s disease, similar to the Ebola virus. It will be unusually lethal because of the immune degradation caused by the CoVID injections. People will beg for a vaccine to this new disease, a vaccine that contains ricin, if I understand correctly. To watch the video, you will be prompted to enter a passcode within a box. Ignore the Chinese characters and just type nov11 in the box.

Here the link to the video.

Others, too, have speculated that Marburg (whether real or not) is on the horizon.  To wit:

Consider this August 2021 warning.  And this article (bolding added):

Gavi, part of the Bill & Melinda Gates Foundation, also indicated as far back as April 2021 that Marburg has the potential to be the next big pandemic but with a mortality rate far exceeding anything we have seen before; according to Gavi, 88% of those infected with Marburg will die of the disease. Similar to Covid, the incubation periods tend to last for 2 to 3 weeks, and would no doubt provide a perfect excuse to reinstate social distancing and once again force the human population to treat one another like walking time bombs.

The notable Aesop has also weighed in on what could happen if Ebola got to America, and Peter Grant’s 2019 assessment of the ease in which it could get here is not comforting (links in the original; italics in the original replaced with underlining):

That’s why this outbreak of Ebola scares me so much.  It’s perilously close to breaking out of its geographic boundaries, despite months of intensive efforts to contain it.  The reason is precisely what I’ve said above.  Local people don’t believe in Western medicine;  in fact, they’d rather flee from it.  In doing so, they’re going to spread Ebola into Uganda (which has “10,000 [border] crossings each day” to and from the Congo – and that’s just the ones who go across legally, rather than walk through the bush).  South Sudan, Rwanda and Burundi are also threatened.  From there, it’s a hop, a skip and a jump to Kenya, with its international airport at Nairobi and its many flights per day to Europe and the Far East.  From there to the USA is no distance at all in terms of air travel.

Be afraid, people.  If you’re not, you don’t understand the situation.  This could turn very nasty, very quickly, and there’s almost nothing effective we can do to stop it if it does.  Even an international travel ban would have only limited effect, given how easily African refugees, particularly Congolese, can cross (and are already crossing) our borders illegally.

Ebola, Marburg, or something else only need to be lucky once in today’s global travel, packed-in dense cities.  Imagine, and shudder, what could happen if a set of deliberately-infected people made it to and then dispersed in European or American cities with training on how to maximize the spread.  Do not forget what happened with Yersinia Pestis’ “world tour”…  Or Typhoid.  Or the 1918 flu.  Or, or, or, and those were with foot, horse, and ship travel, with nobody deliberately trying to spread anything.  As an aside, this book, Armies of Pestilence, is academic-level dry but is nonetheless a fascinating look at the role plagues have had in human history.  One of the book’s conclusions is that civilizations that are rising and ascending can withstand and recover from enormous population setbacks from a plague.  Civilizations in decline, historically, do not.  Where are we on that curve again? 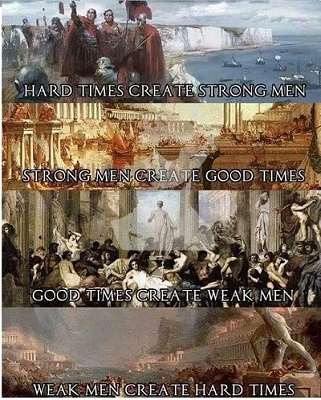 ONE OF MY FAVORITE QUOTES

No, I am not vain enough to think that I’m actually right all the time, but… I’m right enough, and been visionary/prescient enough, that I have had trouble at several employers for seeing farther – the proverbial Seven League Boots – than those far higher on the food chain who are supposed to be the ones with that perspective.  Having immodestly praised myself, cue up one of my favorite quotes:

I am old enough to have had the full sequence of Smallpox vaccinations, though I’d accept a booster if I could find one.  Why?  Because despite Smallpox being supposedly eradicated, there’s this from 2014; Vials of Smallpox Virus Found in Unapproved Maryland Lab:

The vials were found in a cold storage room in the Bethesda, Maryland, research building. It’s unclear how long they had been in the storage room, which is kept at 5 degrees Celsius. But the boxes holding them may date back to the 1950s, according to CDC spokesman Tom Skinner.

Remember, Smallpox is a lethal champ; from the same article (bolding added):

Smallpox killed a third of those who contracted it for about 3,000 years until it was declared globally eradicated by routine vaccination in 1979, according to the World Health Organization. We’re not even vaccinated for it anymore.

Vaccinations for Smallpox were discontinued in 1971, at least in America.  Thus everyone since then, born here, is wide open.  Functionally that’s everyone under 50.  And now lookie-here, what do we have?  Mr. Gates-of-Hell himself: 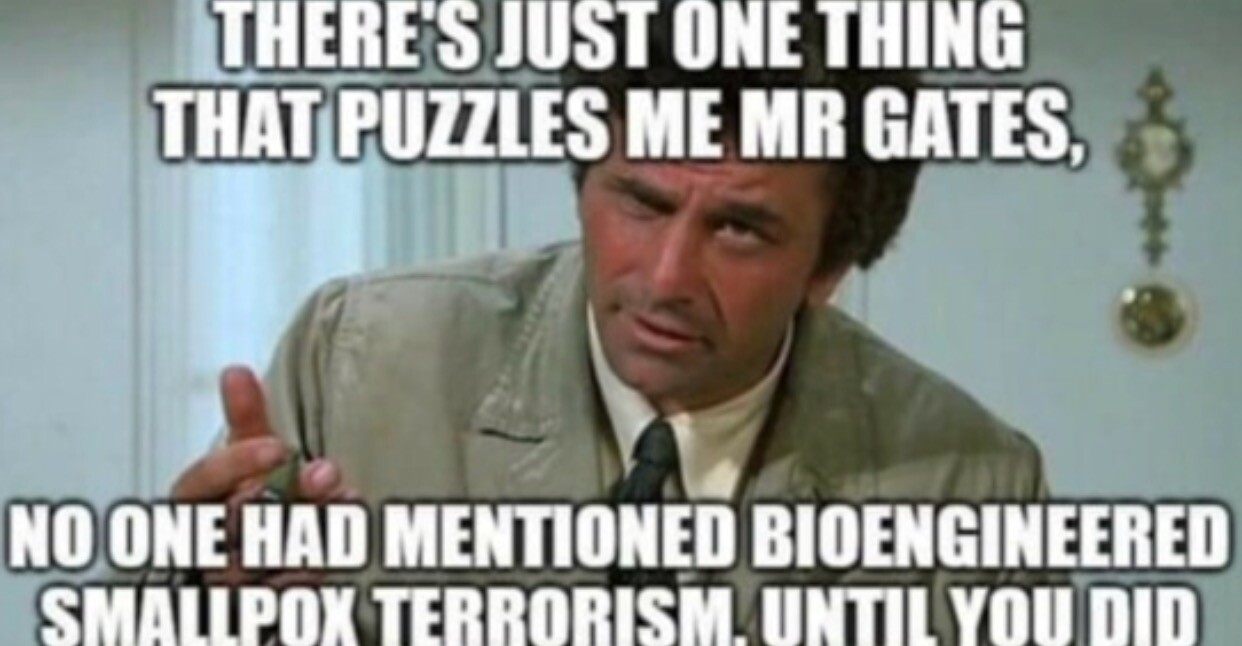 A single case of monkeypox virus infection was confirmed Tuesday in a Maryland resident who recently returned from Nigeria.

Maryland health officials said the has mild symptoms, is currently recovering in isolation and is not hospitalized.

MDH said Monkeypox is in the same family of viruses as smallpox but generally causes a milder infection. It can be spread between people through direct contact with skin lesions or body fluids, or contaminated materials such as clothing or linens. It can also be spread through large respiratory droplets which generally cannot travel more than a few feet, and prolonged face-to-face contact is required.

OK, Monkeypox, not Smallpox, but still.  A relative.  And confirmation that global air travel has infectious risks. 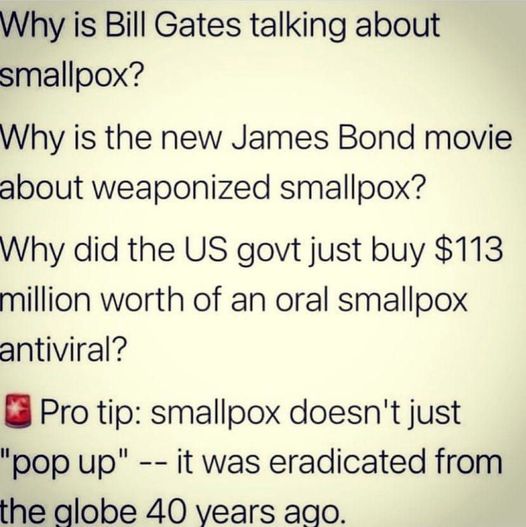 SUMMING UP: SOMETHING BIG IS COMING 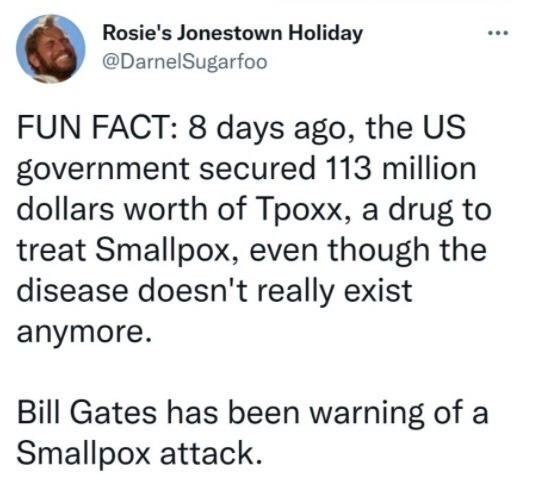 But… but… but Smallpox was eradicated, right?  Right?

And now, cue up the hemorrhagic fever threat:

This has many experts worried including Dr. Malone who is the inventor of the mRNA vaccines.  Dr. Malone today told the War Room audience that he is hearing the current disease that is spreading across China is reportedly an “Ebola-like hemorrhagic fever virus.”  The regime is hiding the true nature of this disease from the public and from the global community — Just like last time!

Doubtless this will be useful fear-porn fodder.  And doubtless, right on cue, they will have a miraculous just-in-time Jab for this one too.  mRNA of course, released under an EUA because of the crisis, and people will flock to the clinics to get it.  And with people having had their CD8 T-cells – the ones that resist viruses – diminished because of the Jabs with more being mandated… doubleplus ungood.  People will drop like flies and it will be blamed on the disease, not the Jab.  Thus the 7.3 billion person question will be on it’s way to be answered.  Don’t forget the video I embedded here as well:

All done believing they are doing good.

Food shortages.  Power outages (see this piece about Berlin, just recently); don’t forget our friend Klaus on the “inevitable cyberattack”).  Plague after plague.  Deaths are rising.  And things heating up war-wise.  Are we sure the Four Horsemen are just a rhetorical idea from times past… or an eddy in time prediction?

A Government-caused disaster in the making?

“Like A Soviet Store During 1981”: Americans Absolutely Horrified By Empty Shelves From Coast To Coast (Video)