I keep hammering on this, but we must grasp that the Left truly believes themselves to be made from finer clay.  Better, smarter, more noble, with only the purest of intentions:

You know this because you and all of like mind agree on this, and everything else, and you don’t listen to lesser beings. What would be the point?

You know because when you and those of like mind compare your obvious superiority, your evolved perfection, to lesser beings—“Deplorables” or “Normals” if you will—the contrast is so stark as to be self-evident, and you make sure no one can avoid your assessment of your exaltation.

Your understanding of human nature and of all things affecting the human condition is unsurpassed in all of history.

You, unlike every terribly flawed human being before you—and of course contemporaries that have not reached your pinnacle of perfection—are solely fit to establish uptopia, heaven on Earth, once and for all.

So, as they enthusiastically prepare for and Jones at having soldiers go door to door to shoot you, either with bullets or the Jab, remember:

Most people are good and occasionally do something they know is bad.

Some people are bad and struggle every day to keep it under control.

Others are corrupt to the core and don’t give a damn, as long as they don’t get caught.

But evil is a completely different creature.

They will, channeling CS Lewis, cheerfully herd us into camps, or enthusiastically shoot us, or both, with the approval of their consciences.  Only someone convinced they were doing good could not just refuse to listen to an actual doctor expressing concern for a sick person, but restrain that doctor to boot; BREAKING EXCLUSIVE: Doctor in Sarasota Hospital Witnesses a 50-Year-Old Man Being ‘COVID Killed’ by Hospital Personnel – Doctor Restrained When He Advocates for Patient (VIDEO)

Utopia always has a dark foundation. 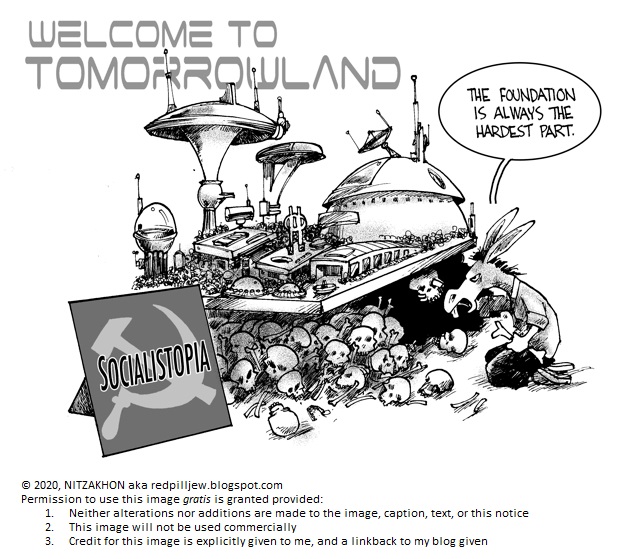 Even my kids understand that utopia – paradise on earth – is unattainable.  But children are what the Left is, see Evan Sayet’s book The Woke Supremacy.

NO SOUP FOR YOU

So Don Lemon has said the quiet part out loud:

If you’re not Jabbed, you can’t eat.  Kulak much, Don?

We’ve all heard of the NYC restaurant attendance requirements, metastasizing across the country too.  Want to fly?  Jab.  Want to drive across state lines?  Jab.  Want to go to school?  Jab.  Never, never, never in the history of mankind has a group forcing medical procedures and obedience on another group been the good guys.

But they think they are.

NO SOUP MEDICAL CARE FOR YOU 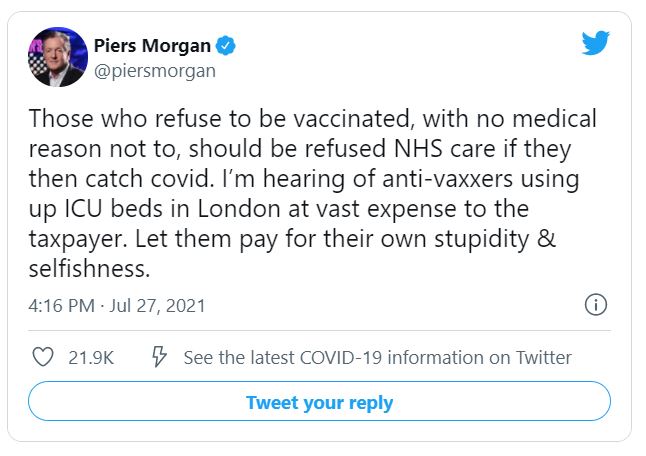 It’s not just for Covid-related issues: a doctor in the NY Times (paywall) asks if he can refuse to treat people who have not been Jabbed.  But it gets worse – people are being denied treatment unless they’re Jabbed; Rantz: UW Medicine pulls heart transplant patient from list after refusing COVID vaccine:

UW Medicine removed a 64-year-old patient from the transplant waitlist. He says he was on the list for two and a half years. The hospital made the decision after they learned the patient refused to be vaccinated against COVID. They said they would consider adding him back to the waitlist should he satisfy their “compliance concerns.”

Allen, who suffers from a litany of heart-related medical conditions, told the radio host he had been on the hospital’s wait list for a heart transplant for more than two years. But in June, after doctors discovered that he was unvaccinated and had no plans to change that, he was informed that he would no longer be in line for the transplant.

This man will probably die without a transplant.  Doctors value his Jab compliance more than the man’s life.  (Say, what’s the difference between sex and rape?  CONSENT.)  And here’s a cri de cœur from a five-month pregnant woman with a heart condition (courtesy of Surak – some salty language):

Do you think that cardiologist would have even a shred of a scintilla of guilt were that woman to die?  I don’t.  He’ll doubtless say that she had a choice… the same choice a woman has when “invited” to a back alley romantic interlude with a knife at her throat.  But – details, details…

The mask harm to children’s brain developments, knowing that faces are critical to children learning to deal with other people?  Memory-holed.  Not wearing your mask?  Prison and psychiatric assessment.  As I wrote here, I am 99% sure our issues with the private school where the kids went were to force us out after I questioned the mask policy:

I’ve been asking some hard questions about the mask policy.  Now I’m not generally an unreasonable person – I didn’t demand masks be dropped instanter (would have liked that, but…).  Rather, I merely pointed out that there are conflicting studies of mask effectiveness – multiple studies showing they don’t work, experiences in states that are dropping masks, strongly-negative impacts on both physical health as well as psychological and interpersonal development, etc., etc., etc.  I also asked, simply, what the criteria are for when the mask mandate would be revisited.  I was told point-blank by the headmaster that no materials I send would have any effect on their policy.

Just as we’ve been expelled from a medical practice because I asked to whom I might protest the masks.  The CDC Protocol is the new Golden Calf to whom every knee must bend; it cannot be questioned.  It is holy writ.

YOUR CHILDREN WILL GET JABBED

In the UK, in the NHS that the Left wants in the US, per nurses there, once the baby is born they’re not yours any more (bolding added):

The video making the rounds is of a pregnant British woman in the hospital because of her high-risk pregnancy, told by two nurses that she can make decisions “while her baby is in her abdomen,” but once born, her baby is “not her property” and they will perform a PCR test for the coronavirus. When she refuses, they said that they call the UK equivalent of Child Protective Services.

Even in America some years ago, who remembers this this MSNBC host (bolding added):

Australia is going full Nazi… with the purest of intentions, of course:

They have openly called for genocide against Trump supporters over political differences.  Understand that they hate anyone to the Right of Stalin:

When a bullet goes through the fatty tumor a Nazi has in the space where a human being would have a brain, nothing is lost

A pile of meat that moved and spoke and acted like a person was made to stop moving, and thus could no longer fool people into thinking it was one of them

Remember, if you don’t want The Jab you are a biological threat.  Go and read how the Nazis viewed Jews as biological threats, and replace “Jews” with “unvaccinated”.  And then compare their rhetoric to today’s anti-anti-Jabbers rhetoric.  If you don’t have a shiver of cold running down your spine you’ve lost your survival instinct.

Tempus fugit.  They will round you up, cheerfully, and kill you.  They’re already doing dress-rehearsals.

“When someone says they want to kill you, believe them”.