File this in the ‘you can’t make this stuff up’ folder folks.

Female Democrat Representatives Jan Schmidt and Rosemarie Rung (two of the worst reps at the NH State House) are complaining for being treated….. seriously… not even kidding… EQUALLY.

They apparently don’t like to be held accountable, as elected officials, for their votes, actions or behavior because… wait for it…. they have LADY PARTS!!!!!!!!!

You can’t complain that you want equality for women and then whine like a little girl when you’re actually treated equally. The Grok doesn’t discriminate. If you’re doing something stupid and it’s on public record, you may just be called out for it, regardless of party or sex. That’s pretty obvious to anyone who reads anything here and they know this as well. They are definitely consistent when it comes to L Y I N G. NH Democrats have lying down to a science. Grok is also made up of writers from all political background and sexes – Democrat, Republican, Libertarian and Independent but facts never get in the way of liars like Schmidt and Rung. By the way, Jeanine doesn’t write for Grok. That’s another one of Rosemarie’s crocks of crap.

Schmidt has been called out for her misandry before on the Grok:

According to Nashua, Alderman (and NH State Rep), Jan Schmidt ‘Grok Hates Women – with a passion. Especially if they speak up.’ That might be news to Kimberly Morin, Susan Olsen, Michelle Levell, Ann Marie Banfield, Ellen Kolb, Judy Aron. Wait, I’m not done.

Carolyn McKinney, Doris Hohensee, Jane Cormier, Shannon McGinley, Betsy McCaughey, and dozens of women from House Reps, to State Senators, to local residents (and even Tulsi Gabbard). All women. We have sought out featured or shared the opinions of hundreds of women in podcasts and on video.

A woman who speaks up on our website is probably going to reach more internet eyeballs (or ears) in New Hampshire (and even Northern New England), than any other venue.

If we hate women, especially if they speak up, we’re not very good at it. 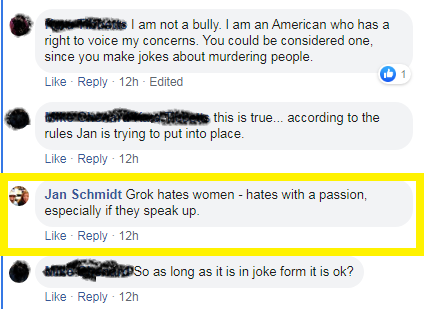 Then there’s the time Schmidt’s husband tried to DOX a woman who writes for Grok, yes that would be me. As most of you know, doxxing can cause actual harm to a person, which is why her husband and her psychopathic leftist supporters, wanted to dox me. Once again, for exposing her and her horrifying family’s behavior.

It’s sad to see this really. I pity these women that they believe they are feminists. Left-wing ‘feminists’ are proving to be nothing but weakminded, dependent women who can’t handle being actually treated equally. Maybe that’s why these same women continue to push for bigger government and less actual freedom for women. These two can’t handle the real world and they believe no other women can stand up for themselves either; therefore, Big Daddy Government must do it for them.

Nothing says “I’m a strong and independent woman” more than women whining when they are held to the same standards as men.

Kimberly Morin is a political activist in the Granite State. She is a lifelong Independent who calls out both sides of the aisle when they screw up.

Why I Won’t Get the Vaccine, Slavery, the Windham Election, and More
Rebuild NH COVID-19 Legislators Policy Summit
Debate Discussion with Liz Gabert and then Guest Cassie Smedlle from the RNC