Republicans are at fault for all of this unrest…So says the leftist mouthpieces. And most are buying that line hook, line and sinker. Yes, our rubber-spined Republicans sit mute…while Rome burns and they fiddle…doing nothing. Nothing. Tom Cotton has spoken out, but Senator Cotton is a lone voice. Again, we see how Leftists are eating our Political lunch and the Republicans are sulking quietly in the corner.  America now feels abandoned and alone. Nobody in Washington has our backs.

Diving a little deeper into this, It still isn’t accurate to blame the GOP for all of this. Nothing but pure data confirms this. Where Riots persist, so too do the Leftist, Kool-Aid slurping Mayors. They complain about poverty and blame Washington. They complain about homelessness and blame Trump. They complain about crime and they blame the police. The Lefty mayors seem void of introspection. They are completely incapable of taking ownership when the proverbial wheels are coming off their cities. Riots, Looting, Murders, ANTIFA. Citizens are no longer safe and Police cannot get to some places in a few of these cities. That is completely on these Cuck Mayors, whether they acknowledge that or not.

So while they are blaming Trump and other Republicans, lets look at the data… 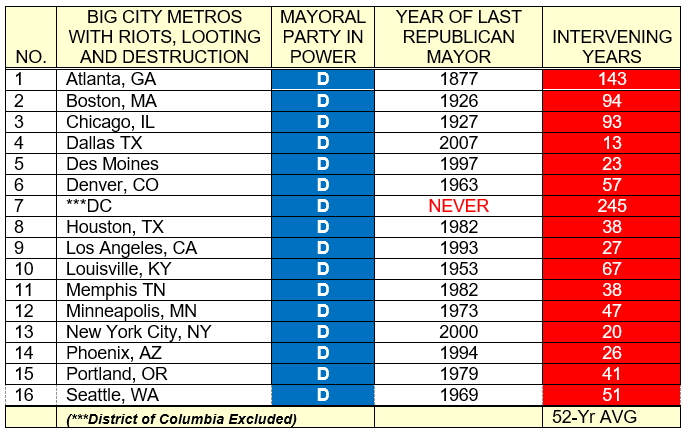 Of the fifty largest major metros with populations of 390,000 or more, only 26% have Republican Mayors. In the list above are the cities where hoodlums are running rampant, destroying property, engaging in violence and maintaining a state of general disorder.

The Mayors, for their part are eschewing Trump, Republicans and whomever else where they can lay the blame. Senator Tom Cotton told Fox News,

There is “zero tolerance for anarchy, rioting and looting” and it needs to “end tonight. Such behavior has nothing to do with the death of George Floyd.”

Sheriff Grady Judd of Polk County Florida gets it right….

Ponder that a while.

Rick Olson is a veteran of the United States Marine Corps, and a graduate of Southern New Hampshire University with a BA in Social Science. Rick subsequently attended Massachusetts School of Law in Andover MA. Rick takes up second amendment issues on Granite Grok, as well as issues surrounding hunting, fishing, trapping and wildlife issues. Rick Olson is a former Police Officer and Deputy Sheriff.
He is Past President of the New Hampshire Wildlife Federation, Past President of the Londonderry Fish & Game Club, and current Board Chairman.  Rick is a nationally certified firearms instructor and a Hunter Education Instructor. He can frequently be found teaching Urban Rifle and Defensive Pistol classes as an Instructor with Defensive Strategies in Goffstown, NH.  Rick resides in Manchester with is wife Lisa. He has three children and six Grandchildren.

New Media news from around NH

Gary Daniels for State Senate: A Return to Working Together