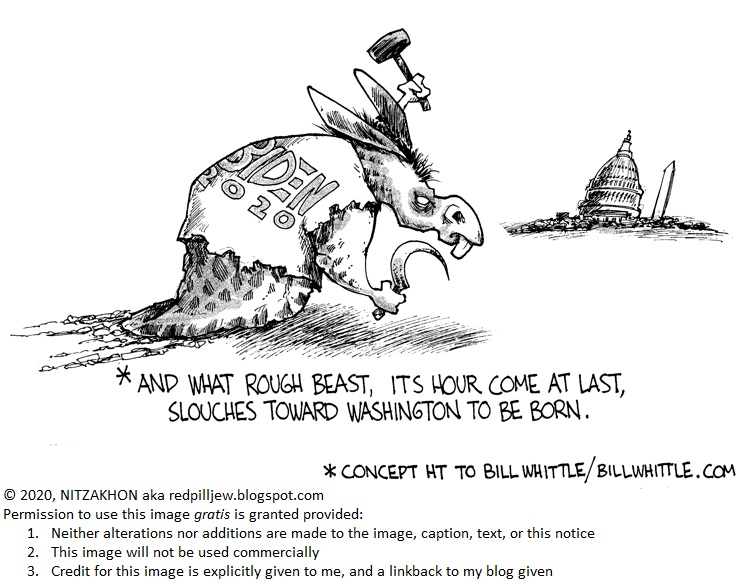 Comment: I did not realize how horribly prescient this cartoon was.  Even I, as pessimistic as I was about President Post Turtle’s *cough b*llsh*t cough* “election”, had no idea of how fast things would go south.  But then again, these people may be insane, but they’re diabolically clever and doubtless had plans lined up waiting – especially to ensure that Trump or one like him could not possibly win.  Just like they have 2,000 page bills pre-written for when the next false flag mass shooting event or other crisis happens.  And so on.

Oh, and I am pleased that the good Baron has deemed my essays and other links I send worthy of inclusion in his own link aggregates.  Here’s his latest:

In one of my – alas, too many – wee-hour ruminations something was nagging at me about the NWO video I’d included here.  Specifically, the comment implying they’d missed a chance to reduce the global population to one billion from three billion.  Here, see for yourself:

Now, when was the global population three billion?  1959:

There is no estimation for the exact day or month the world’s population surpassed the one and two billion marks. The days of three and four billion were not officially noted, but the International Database of the United States Census Bureau places them in July 1959…

So my inference is that the globalists have been on the depopulation train since at least that early.  I firmly believe they’ve been on that train for far, far longer than that.  But in parallel, they’ve been on the white genocide train as well.  Consider, not long after that 1959 date, just six years later, Democrats pushed through immigration reform.  Slowly, slowly, remaking America’s population demographics.  And Europe’s.  Why?

Because nations matter – and to implement the great Socialistopia the idea of nations and borders and culture and even race must be eliminated.  These people have listened to John Lennon’s “Imagine” on autoplay for so long they’ve come to believe it.

Meanwhile, back in reality, NATIONS MATTER.

The Case for Nationalism: How It Made Us Powerful, United, and Free

The Virtue of Nationalism

BORDERS, LANGUAGE, AND CULTURE matter.  And all must be razed to the ground to create Socialistopia – regardless of how bloody the foundation must be.

On my old blog – still there and good for links to other sites but otherwise blank – I had a “modest proposal” for reparations.  Simply put, let’s indeed make amends for the great crime of slavery.  And, realistically, slavery is a great crime – but a great crime committed by every people and every nation throughout history… until AMERICA and BRITAIN put their militaries on the line to end it.  Except, even now people are being bought and sold, including children.

So what was – and still is – my proposal?  Let’s right this horrific wrong… and send the whiners back with their “40 acres and a mule”.   Because, as the cartoon clearly points out, without the trans-Atlantic slave trade, that’s where they’d be.  Let’s throw in a million dollars in cash per family, and perhaps even let the locals know their long-lost and very-loaded relatives are coming home, so they can arrange a welcome reception for their returning kindred?

If all you are is a mass of grievance and anger and a sense of entitlement to mooch on others over what happened well over 100 years ago… GTFO.  I’ll help you pack.

Presenting a fantastic trio of Bill Whittle videos, elucidating a critical point: we’re being isolated and then gaslighted – because it is only in isolation that gaslighting works.  I’ll return to this idea anon in a standalone piece, soon.