Last week’s meeting at Exeter High School to cover the dog and pony show about Diversity, Equity, Inclusion and Justice, included several members of Black Lives Matter who were in attendance. An alert went out by BLM Seacoast asking people from all over to attend.

Several of the attendees wore their BLM shirts and held signs supporting the CRT agenda in SAU16. 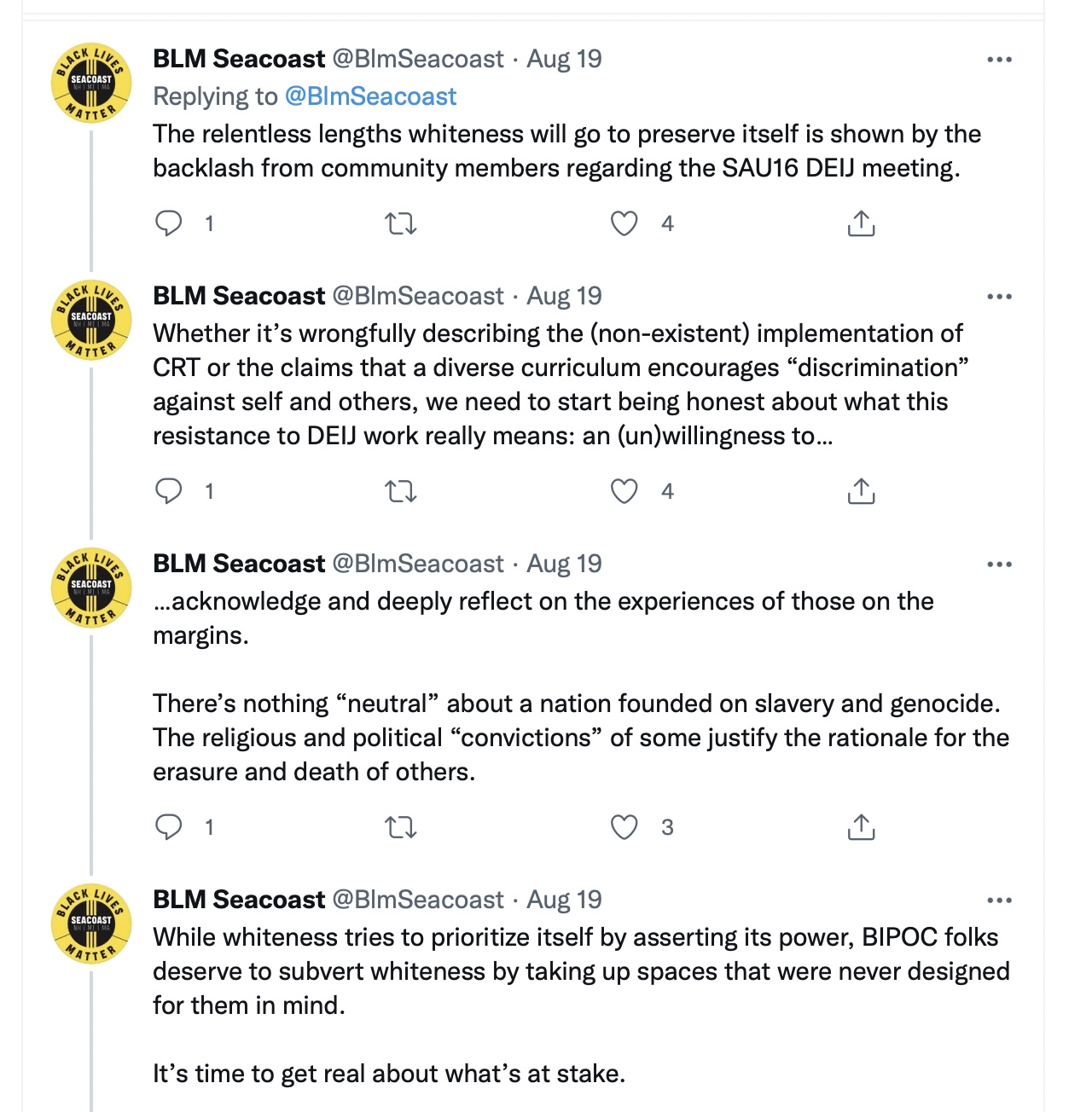 At the DIE-J meeting, no police officers were present. Was that because of the hostility towards the police force by BLM? Maybe the Superintendent can explain that to the community. Why were police at the board meetings but not the DIE-J meeting?

Police officers were present at the last few school board meetings. To heighten the police presence, the last board meeting included State Troopers.

They had no problem calling for a police presence even after the Exeter High School teacher required a student to remove the Thin Blue Line Flag he was wearing on a day that students were encouraged to express their viewpoints by wearing flags as capes.

They called in the police in spite of the hostility and contempt towards police officers this district has flagrantly exhibited.

Parents are already upset by the new narrative that’s being forced on their children which comes directly from Critical Race Theory propagandists.

They are not happy about the school rank dropping.

They have watched their children suffer academically with the shutdown last year. The academics are suffering, and Superintendent David Ryan has made it clear that CRT is the main focus now whether you like it or not.

The community is divided, and unity is nowhere in sight.

So what will the administration do now that they’ve hired one of BLM’s Board Directors? Will they eliminate the Resource Officer since that is a demand by BLM Seacoast?

Will BLM host training for school officials as they demand? I  hope that this administration will be transparent if they are meeting any demands put forth by BLM. It will be important to meet demands from other political organizations or religious organizations that want equal representation if this is part of the agenda.

E Michelle Holt-Shannon, director of NH Listens at The Carsey School of Public Policy at UNH, moderated of the August 19th DEI-J meeting at Exeter High and opened the meeting by threatening to call the police on attendees. But according to 2Revolutions, a political organization hired to train SAU16 teachers, you are a white supremacist if you call the police on black people.

There were black people on the stage and in the audience, so according to 2Revolutions, she is a covert white supremacist. And shouldn’t she be phoning a social worker? Is she having issues with her white privilege that she doesn’t know that when there is a problem, you don’t call the police, you call a social worker!  Even Gilmanton ditched 2Revolutions immediately in response to concerned parents. 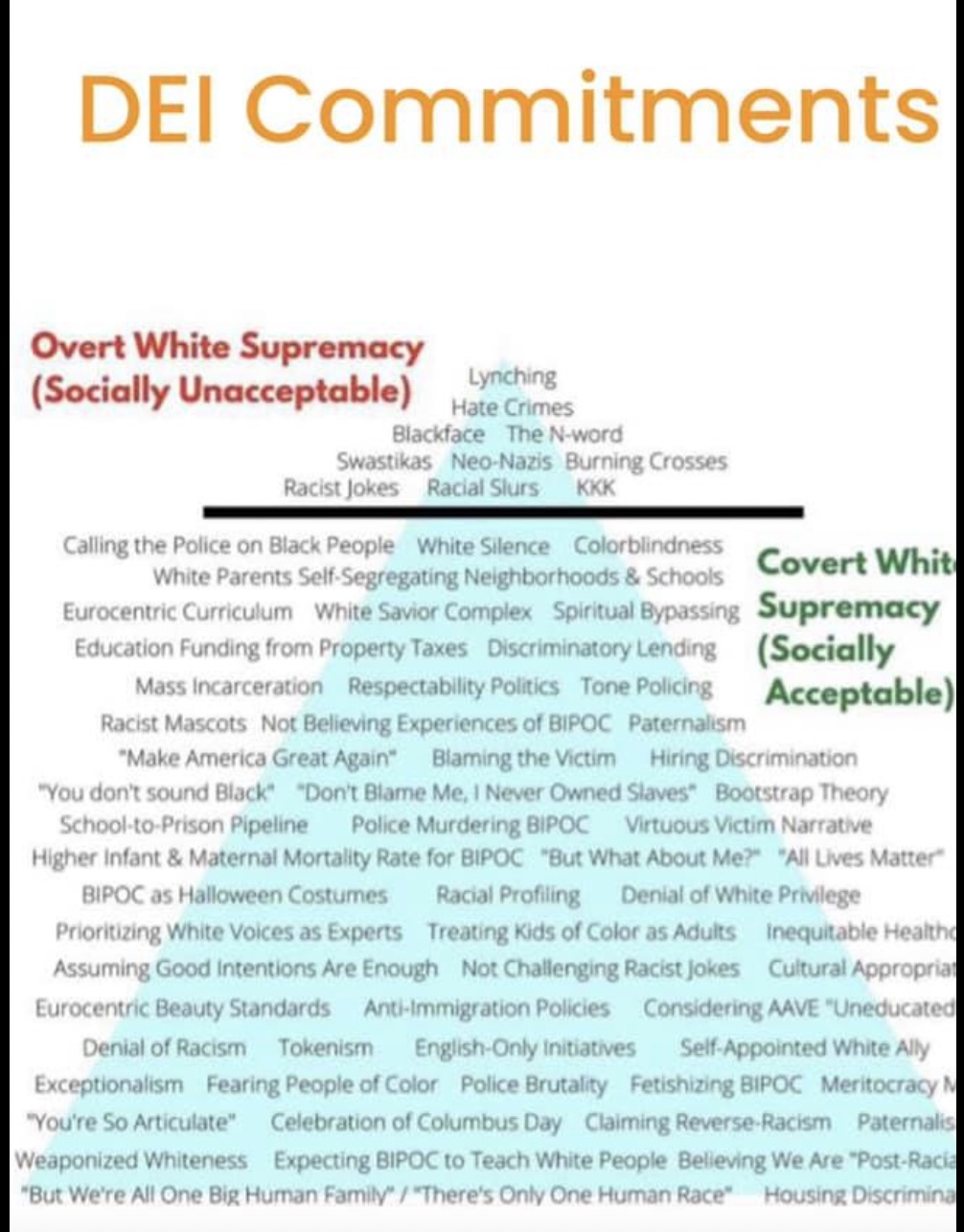 To BLM Seacoast, I’m happy to help you in any way if and when you decide that the best thing a public school can do for students of color is, improve their academic achievement. You can do this by holding accountable those who are employing methods and using a curriculum that fails these children.

I will work side by side with anyone dedicated to getting to the root of the problem and working towards solutions. I don’t care if that’s BLM, the NEA, teachers, or Superintendents. I won’t feed anyone fluff and pretend that these feel-good solutions being peddled will work. They will not.

After years of research, success can be realized by a few simple changes. First, hire the best teachers and let them do what they do best, teach. Second, use content-rich academic content in the classroom and leave the political bias out. Third, offer a structured and disciplined environment so students can learn. It’s not that hard.

Private schools and home-school parents do this daily. The shift to competency-based education, student-centered learning, and every other fad ignores what really works for most students.

Offer help to children who need the extra help, and stop making excuses for failing children with IEP’s and special needs.

Should children learn about blacks in history? Of course. But the messages that are being sent are messages of victimhood and oppression. If this turns into a self-fulfilling prophecy, you’ve contributed to their demise. If you educate students of color, elevate their knowledge, you open a world of opportunity.  If you uplift and encourage them instead of insisting that they are victims, you offer emotional support.

Sadly, I don’t expect anyone will take me up on this offer. Those within the status quo reject anyone who wants to improve academic outcomes.  Maybe someday they will want to really help students of color and every other child who attends a public school.  Public schools are in a free-fall downward with enrollments dropping along with proficiency scores. SAU16 has doubled down on this spiral, and the data proves it.