One of the terms that I keep hearing, ad nauseum, is “Vaccine hesitancy.”  That’s THE breathless question: Why are people hesitant about taking this shot?

Except… there are multiple reasons that intelligent and educated people are refusing to be injected with unapproved synthesized genetic material in a coercive push that violates the Nuremberg Code: The Nuremberg Code: The Universal Right of Informed Consent to Medical Interventions has been Recognized in US Law Since at least 1914.  Fraudci’s argument about polio and smallpox are also mendacious; It Doesn’t Take Censorship to Fight a Pandemic… add in the government paying “influencers” to pimp the Jab to kids.  Why this obsessive drive to get this stuff into every living human?

I propose we turn it around: start asking them why they’re willing to take it.

At this link, Physicians Around The World Warn Humanity, doctor after doctor after doctor, express their hesitation, even alarm, at the Jab and its potential side effects, including the risk of death.  Blood clotting is common, and the lack of open debate – a foundational element in science and a free society – is telling.  SHUT UP! is not an argument that elicits confidence among thinking people—Doubly-so when people argue that the New Priests cannot be criticized.

We know that there is massive information (see quote below, links in the original) contradicting the panic, the Jabs, the masks, and the lockdowns:

According to Johns Hopkins, the survival rate of COVID-19 is better than 98% for all age ranges.  The data regarding deaths and other health complications associated with the mRNA vaccine raise valid concerns.  Simple physics informs professionals such as engineers and filter manufacturers that a cloth or paper mask is powerless to stop virus molecules.  A recent lab analysis of masks worn by children for 5–8 hours found antibiotic-resistant bacteria, as well as pathogens that cause maladies such as E. coli, pneumonia, tuberculosis, meningitis, diphtheria, and Legionnaires’ disease.  Recent data show that, rather than curtail the spread of COVID-19, lockdowns exacerbated it.  Finally, we know that (a) unvaccinated, asymptomatic people do not spread viruses; (b) the young are the least likely to be harmed by COVID-19; (c) there are numerous therapeutics available that have treated COVID-19 (among them, the HCQ/azithromycin combination, and ivermectin); and (d) since the dawn of humankind, we have successfully combatted viruses with natural defense mechanisms — among them B cells and T cells.

As was posted on the Grok recently, The Government Has Given US No Reason to Trust Them….  The government and the enemedia have lied, and lied, and lied, and lied for so long on so many things that it’s amazing there’s even one person who still believes them.  But now, pinky-swear, they say trust us again.  Nuh-uh, we’re not Charlie to their Lucy’s football anymore.  The trust card’s been canceled.

We now see that the protection given by The Jab is fleeting; Pfizer Covid-19 vaccine “protection against virus” drops stunning 84% just four to six months after “fully vaccinated” SECOND DOSE of blood-clotting mRNA injection (bolding added):

New research conducted to see if the Pfizer China Flu vaccine really even works revealed that it barely does, waning almost immediately, after just 4 to 6 weeks, to a next-to-useless 16 percent efficacy. That’s after the victim is “fully vaccinated” with the second dose of gene therapy for the Fauci virus.

Other countries report similarly, e.g., Iceland and Israel.  And in general, Pfizer CEO Says COVID-19 Immunity Fades 6 Months After Receiving Experimental Pfizer Jab.  Add in the Delta scariant… and the Epsilon and Lambda, and – wait, what do we use after we run out of Greek letters?  At this rate, we’re gonna need another alphabet (bolding added):

By sequencing the COVID RNA and focusing on the spike protein mutation, researchers can identify new vaccine-evading variants early and serve as a warning system for outbreaks, weeks before positive-test and hospitalization rates rise. In the process, they also found four new COVID “lineages,” or variants, of coronaviruses in the city’s sewer system, on spike protein mutations Q493K, Q498Y, H519N and T572N.

The virus is already mutating to get around the Jab (bolding added):

An analysis of more than 50,000 real-life SARS-CoV-2 genomes isolated from patient samples further showed that most of these virus mutations were already circulating, albeit at very low levels in the infected human populations. These results show that SARS-CoV-2 can mutate its spike proteins to evade antibodies, and that these mutations are already present in some virus mutants circulating in the human population.

So it’s pharma profits über alles, e.g., Pfizer and Moderna.  They’ve addicted you to boosters every six months for the new variants the Jabs are themselves, creating to head off Antibody-Dependent Enhancement harm.  This is a pusher business model, except it’s legal, and there is no liability for them if you are injured or die.

Oh, and did you know that the spike protein goes everywhere in your body, including the ovaries?  They say there is no proof there are fertility concerns – that’s not the standard: there needs to be proof there are NO concerns.

So when someone asks you why you’re vaccine-hesitant, flip it and ask them why they’re vaccine complicit.

Ask them why they’re willing to take a “vaccine” that doesn’t keep them from catching or transmitting the disease – giving lie to the promoted idea of herd immunity.  Ask them why – for what innocent reason – the WHO removed natural infection-recovery from the definition of herd immunity – thus making The Jab the only way to achieve it. Except as just above, it doesn’t.

Ask them why they’re willing to be test animals for a technology that in prior attempts killed the test animals when they caught the virus again.  Ask them why they’re willing to run the risk of having the RNA reverse-transcribe into their own cells’ DNA.  Ask them why the CDC used the PCR test with cycle amplifications far beyond what was recommended – coincidentally revised downward just after the election – and for a test that cannot distinguish between the normal flu and Covid.  Ask why known-safe drugs that were successfully used to treat/prevent Covid, like HCQ/Zinc and Ivermectin, were and still are unapproved… then snidely suggest that it’s because they’re off-patent and thus cheap and don’t contribute to the pharma bottom line like a new Jab does.  Ask if the pharma C-suite getting monstrous bonuses is worth their taking the risk of microclots throughout their body, including in tissues that do not regenerate, for a virus with a better-than-99% survival rate.

And ask if their children getting Jabbed, risking neurological or other issues and even death, for a disease for which there is a very low fatality rate, especially for kids, is worth the risk.

And then ask, “Say, remember Sweden?  How everyone was aghast at their ‘lax’ Covid approach?  How are they doing?”

The odds are good, though, they’ll be Eloi, smile, and move away.  They cannot be saved. 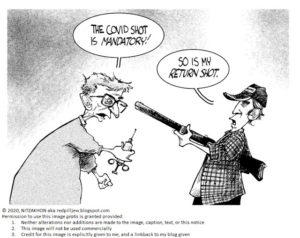 Mutant variations and the danger of lockdowns

Experimental Assessment of Carbon Dioxide Content in Inhaled Air With or Without Face Masks in Healthy Children: A Randomized Clinical Trial

Despite ‘Delta’ Alarmism, US COVID Deaths Are at Lowest Level Since March 2020, Harvard and Stanford Professors Explain

I’m Unvaccinated—And I Plan to Stay That Way

When Are We Going to Start Questioning THE REST of China’s COVID-19 Narrative?

And lastly, I don’t want to hear one f*cking word about Jab mandates to “stop the pandemic” when Covid-carrying illegals are streaming over our border, being put into busses and planes, being distributed all over the country, and dropped off into communities – and all done by the government that says Covid is an existential threat.

Border Patrol Official Warns that Covid-Positive Aliens Being Released “Day In, Day Out”

Editor: We would like to welcome Nitzakhon as GraniteGrok.com’s newest contributor. Past Op-Eds will be migrated to his official user account.