I’ve discussed the impenetrability of most on the Left to new information on my old blog in a series coining (I think) the term Teflon Intellects.  Alas, that blog is gone for reasons not to be discussed here.

Nevertheless, many others across the Conservative blogosphere have also noted Leftists’ absolute aversion to considering anything that might unsettle their worldview or image of themselves as good persons.  Well-described, ironically, by the Marxist Frantz Fanon:

“Sometimes people hold a core belief that is very strong. When they are presented with evidence that works against that belief, the new evidence cannot be accepted. It would create a feeling that is extremely uncomfortable, called cognitive dissonance. And because it is so important to protect the core belief, they will rationalize, ignore and even deny anything that doesn’t fit in with the core belief.”

Let me not absolve persons on the Right – they too sometimes seem terribly closed-minded… but IMHO the phenomenon is vastly more prevalent on the Left.

NOBODY WHO KNOWS ME IN PERSON

I have a high IQ – above 150 last time it was tested.  (Aside: I read the book The Curse of the High IQ and in it found multiple stories & testaments that could have been pulled from my own life.)  I’m not bragging per se because I think IQ is a very limited measurement, but nonetheless, nobody who knows me, who has met and conversed with me would, objectively, think I’m stupid or uneducated.

I have two Master’s degrees, a couple of patents, and have been told by one employer that I was probably the most intelligent person who ever worked there.  (An aside: during a series of interviews at a company where the founder was a man who had the proverbial seven-league boots mentally, I overheard his right-hand man mention to him – after my interview with that subordinate – “No wonder he scares people, he’s just like you”!).

Nonetheless, as a person who has openly stated that I used to be a “climate alarmist” and now am a “climate change denier skeptic” I reflect on the fact that I can count the number of people who have asked why I’ve changed my mind on one hand.  With fingers left over.

Virtually nobody, even those whom I’ve known for years, asks what seems to me to be fundamental questions: Why did you change your mind?  Can you tell me more?  What are you reading that I’m not?  And perhaps the most fundamental & introspective question of all, ‘What if I am the one who is wrong?’

I beseech you, in the bowels of Christ, think it possible you may be mistaken.

Many of these people are persons whose intellects, educations, and accomplishments I admire.  Some have STEM PhDs and decades of experience – fields in which curiosity and an interest in looking for tidbits and oddities should be fundamental traits.

One person I know, whose specialization is metrology, told me that the prior year was the “warmest year on record.”  But when I turned around to ask what I thought was a logical follow-up question, i.e., “OK, by how much was it warmer”? they did not know.  Not only did they not know, but that question had – by their own admission – never occurred to them to ask.

Huh?  A person whose job it is to measure things and understand differences doesn’t even think to ask??  And when I pointed out that the temperature difference was something like 0.1 Celsius, thus well within any error bars, there wasn’t a follow-up of “Where can I go to learn more”?

A CONVERSATION OVER OMELETS

I recently got together with a person with whom I’ve been email-conversing for a while.  We talked over breakfast, and one of the things they mentioned was the omerta against discussing anything not FDA / CDC approved regarding Covid by people in their life.  Question the actual damages (HT: Surak) to people being done by the Jab, and give actual evidence: 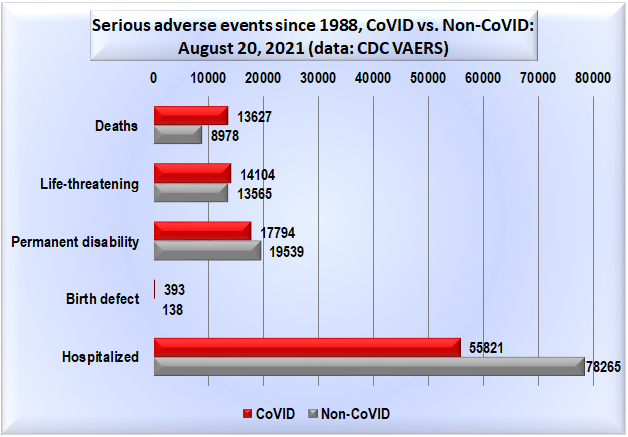 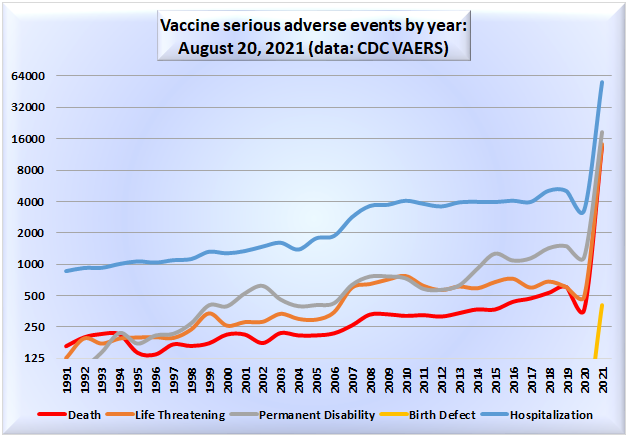 (Above two images used with permission – and note the scale on the second is logarithmic, not linear, lest the pre-Jab data fall to near-invisibility.)

And it’s Stop!  Stop!  I don’t want to know!  Either that or I don’t believe it!  Then they panic and disengage physically, or they smile like an Eloi and disengage mentally (italics in original):

[I talked] with a parent of one of my kids’ classmates at a kid sporting event.  Puffing up proudly, he declared that both he and his wife had been fully vaccinated, that their older child had been too, and that as soon as their other kid was 12 they’d get be Jabbed too.

He asked if I was vaccinated, and I said “No”.  When he asked why, I said that I had some serious safety concerns about this emergency use authorization stuff including the fact that no mRNA treatment having ever made it through human trials before, and the rush to get this out.  I mentioned the Nuremberg code, and said that for a virus that has about a 99.8% recovery rate for people under 70, I was not scared…. His smile became this fixed , eyes unresponsive, just nodding a la OK, whatever, just get away from me you conspiracy monger you.

Just like the headmaster at the private school where our kids formerly attended stated that no information I gave on the risks of mask-wearing would make any difference to their policy.  Zero – ZERO – interest in any information that contradicted the writ of the Church of the Covidian.  Just like others I know who, when I mention that Ivermectin is showing incredible results, express astonishment having never heard that.  One person in particular, someone I consider highly intelligent, did not ask what – again – seems to me to be an obvious follow-up for more information.

“One of the saddest lessons of history is this: If we’ve been bamboozled long enough, we tend to reject any evidence of the bamboozle. We’re no longer interested in finding out the truth. The bamboozle has captured us. It’s simply too painful to acknowledge, even to ourselves, that we’ve been taken. Once you give a charlatan power over you, you almost never get it back.”

Nobody likes to admit they’ve been fooled.  Similarly, few people want to admit that a cherished belief – linked to their self-perception as good and moral and intelligent/educated people – might be in error.  It’s why, as Thomas Sowell discussed in his book Vision of the Anointed, people on the Left implement program after program without ever considering or examining the real-world results – only their intentions matter.

Whether faith in the golden calf of “Science” to stop Covid or saaaaaving the planet from eeeevil CO2 or whatever, that requires not just changing your mind, but conceding that you were misinformed – or even worse, actively fooled.  It means setting aside your vanity.  Not for nothing did Al Pacino’s character in the movie The Devil’s Advocate opine, at the end, that vanity is definitely his favorite sin (video, 0:59).

Far safer and more comforting to stay in denial.  For learning requires humility.

You never change things by fighting the existing reality.

To change something, build a new model that makes the existing model obsolete.

Until we grasp how to present information that doesn’t directly attack that emotional conclusion they are good, noble, etc., we will continue to lose the information war.  For that’s the real battle.  What new models can we present?  And how do we shake up the emotionally-arrived at conclusions?  The only way I’ve had any success – and limited at that – is to present such irrefutable evidence they’ve been lied to, that they react to that realization – and only then by first getting them to agree to something, then hitting them with disproof that cannot be ignored.  Then, and only then, when they realized they’ve been played and are seething about it, can alternative data be presented.

One example, specifically regarding the Israel-Fakestinian conflict.  I present this image which appeared in multiple Arab newspapers (source for this image, and others, from this post) but understand this image comes from twitter: 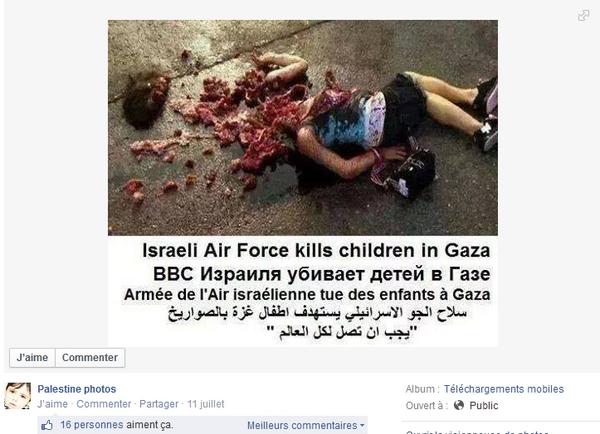 It is obviously a horrific image.  Fortunately, I tell people who have the standard-and-natural revulsion to it, that it’s actually caught on video – link to a youtube video that requires age-verification.

Yes, that’s right.  A screen capture from one of the Final Destination movies.  The Fakestinians screen-grabbed it and presented it as an actual event… and people eat it up.  Until shown otherwise, and then the reaction is natural: Holy sh*t, I’ve been played!

And that’s when eyes start opening.  Only with a greater emotion, anger at being played, can the prior emotional conclusion be challenged.