Survey: “Which States Are Best for Progressives Dissatisfied with the Direction of New Hampshire?” - Granite Grok
Skip to content

While progressives may broadly agree on their dissatisfaction with the libertarian-conservative direction of New Hampshire, there is considerable disagreement over which of the 49 other states would best match their values.

The Progressive State Project (PSP) conducted an unscientific survey, collecting over 300 internet responses to determine which states NH progressives should consider moving to most.

PSP surveyed potential and recent migrants to New Hampshire, many of whom had faced the converse problem: they were highly dissatisfied with the steps that their old states were taking towards progressivism. These are what marketers call “lead users,” who take unusual, definitive action — in this case, citizens so dissatisfied by rising progressivism that they migrate to escape it.

These past and future movers to New Hampshire explored the various states before they moved — not just to find the greater freedom they sought, but also with a fearful eye out for progressivism; they wanted to avoid making the multi-thousand dollar mistake of moving to a state where they would be similarly distressed.

Their feedback  allows us to tentatively answer our question:

“Which states are best for progressives dissatisfied with the direction of New Hampshire?”

If we look towards the states that these NH movers avoided, we could be pointed directly back to those states that are the strongest for progressivism. These states would provide the best opportunities for NH progressives to make a difference in the direction they most desire. Not only are these states already progressive, but with those citizens who offer the most steadfast resistance avoiding them, progressive movers will find it far easier to advance their policies and culture. And of course, with non-progressives migrating away from those states, there will be plenty of housing and jobs for progressives to move into.

The top state for progressivism — judged by NH movers-for-liberty — was California.  It received 39% of the vote — more than two and a half times as many votes as any other state, and more votes than the next seven most progressive states combined! “California is quite progressive. There’s not much possibility for liberty there.” Nir. I. summarized.

The many reasons mentioned ranged from property rights infringements (e.g., removal of shoplifting laws, ignoring of looting and arson) to cultural issues (e.g., Hollywood, lack of liability for infecting partners with AIDS), to gun control, to taxes, to welfare programs, to famous politicians, to (overly) inclusive voting rolls, to insurmountable Democratic super-majorities.

Matthew S. was an example of the tendency to use one issue to paint the state: “I’d have to go with Cali primarily because of its support of homelessness.”  Dennis R. was an example of providing great detail on one issue: “Just look at their commitment to keeping everyone safe: Gun Control… it’s illegal to own an “assault weapon” that isn’t registered with the state (and those will be illegal to own one soon enough). Possession of magazines exceeding 10 rounds is illegal. So-called “Ghost Guns”, home-made Assault Rifles or pistols, must be registered with the local Sheriff’s office.” Brian M. hyperbolized the inability of the respondents to list all the reasons, “I would expire before running out of examples of the progressiveness of California.” Conversely, New Hampshire has virtually no restrictions on firearms and ranks dead last in the United States in gun control.

Dennis R. concluded: “It’s not yet Utopia, but each progressive who moves here and votes, brings it closer to the world they want to live in.” 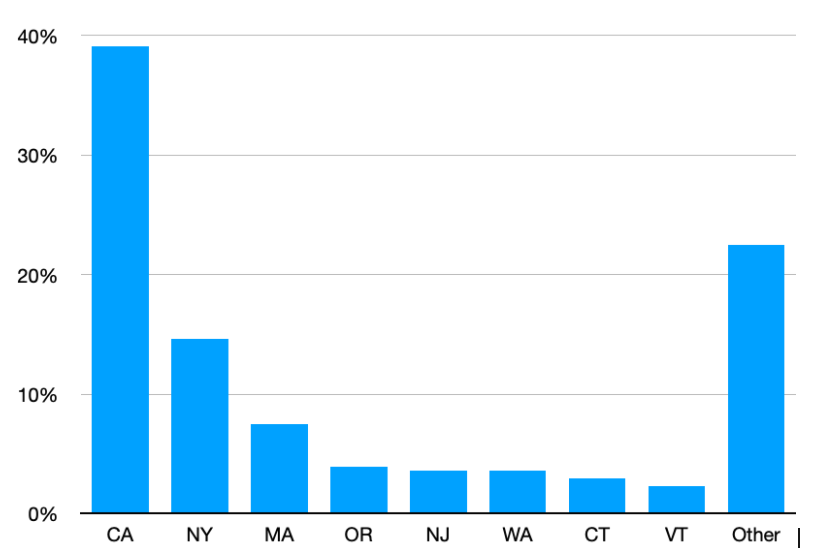 In second place was New York state with 15% of the vote.  “You can’t beat the New York cities for progressivism,” Russ N. wrote. Brian B added, “NY is by far the progressive heaven on earth. Vaccine mandates, removal of religious exemptions, mass government surveillance, limits on Constitutional rights, permits for everything including parking at public places [despite already] excessive taxation. It’s a Liberal utopia.”

Russ N. detailed its gun laws as attractive for progressives, “We have strong gun control, and there have been very few mass shootings here. For example, to get a pistol permit (only available outside NYC) takes at least six months, several hundred dollars in fees, and requires gun safety training.”

However, there was strong push-back from the California contingent,  Jenn H. argued. “I’ve lived in both NY and California: NY has nothing on California. I would not recommend NY to progressives. Upstate NY tends to be pretty conservative. California in general is way more progressive.”  Josh G. agreed, “I was always so surprised at the vast amount of Trump support outside NYC. But NYC is so dense[ly populated] that it controls the whole state.”

Steve S. explained, “I live in NY state, and would recommend it to progressives were it not for the fact that it’s somewhat divided. New York CITY is a progressive utopia, with very little disagreement and dissent; [progressives] would love it there. But New York STATE (particularly the further north and west you go) is by no means progressive. The “Hunger Games” is a good [analog]: NYC is “The Capital” which rules harshly the “Districts”.

Movers gave Massachusetts half the votes of New York, with its proximity to New Hampshire as the main benefit for progressives moving from New Hampshire.

“Massachusetts has progressive tendencies to start with, and it is a far easier move from NH”, Axl D. wrote. Laura K. admitted, “I always encourage progressives to move to MA, because they will most likely be able to keep their job, but have the controlling laws that make them feel safer.”

Pat A. considers most states less progressive than Massachusetts. “I’m originally from Massachusetts. I love the freedom I’ve found in other states relative to Massachusetts.” Carol P.’s reasoning combined both proximity and extent of progressivism, “Massachusetts for sure! They can live near enough to their NH family and friends to visit regularly, it’s a similar climate and topography (but more coastline!), it consistently supports progressive policies, and it was the only state to vote for George McGovern in 1972!”

New Jersey seemed like a similarly mixed bag for progressives. “NJ has very purple and red areas. Recent polls show a relative dead heat between the two governor candidates. We have a powerful medical-freedom movement. Progressives might not like it here,” Randy F confided.  Victor C disagreed, underlining one measure, “NJ has the strictest gun laws in the union.”

Completing the top seven states (those with more than 4% of the vote) were Oregon, Washington, and Vermont.  Additional states garnering more than 1% of the vote included Washington DC, Maryland, Rhode Island, Colorado, Minnesota, Maine, Wisconsin, Delaware, Virginia, Pennsylvania, and Michigan.

Of course, climate, proximity to family and friends, job, etc., will be factors in each progressive’s ultimate choice, but, as opposed to NH, the states cited were on the “right track” for progressives.  As Pat A. summarized, “Democrats have been in charge in those states forever, so their policies have the best chance to create liberal utopias.”