Is President Asterisk Ruthlessly Deleting Wrongthink in Your DM's and Emails? - Granite Grok
Skip to content

On my old blog, I had a post about the coming Great Silencing.  In it I predicted that blogs would be shut down, fascist book, gulag, twit, etc., would be cracking down and ruthlessly deleting wrongthink posts (if permitting them to go up at all thanks to algorithms and AI scanning).  This would go well past the ongoing cancel culture and shadow banning to include emails and DMs.

Lo and behold,  message app crackdowns on Covid “misinformation” is something the nascent Fascists in President Asterisk’s administration is doing.  Is this happening?

We want to thank NITZAKHON for this Contribution. If you have an Op-Ed or LTE
you want us to consider email us at Editor@GraniteGrok.com.

As an example… I sent these two links from a friend, who had sent them to me through one of the verboten eeeeevil “white supremacist” (of course!) messaging apps, to my email via the standard phone message app.  (Image is trimmed to hide any identifying information.) 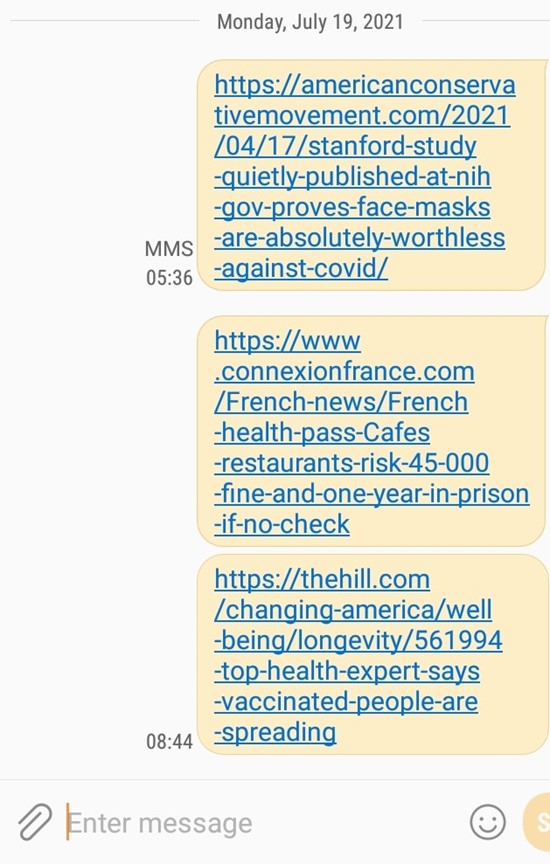 Aside comment: I have both Telegram and Signal.  I have heard conflicting narratives of which is more secure, but a person I know and trust whose business is security – whether IT or meatspace – tells me Signal is far better.  It’s his livelihood, he should know.

Note that I routinely use this app with no problem for sending pictures from my phone to my email.  The first link, which I’ve sent to myself previously prior to this diktat from the FICUS, made it to my email.  But the second two did not.  This experience echoes other experiences in the last week or so where Covid-related links that have been sent to me by multiple persons through secure message apps, which were then copied and pasted into the regular message app, likewise did not get to my email.  In contrast, non-Covid-content messages seem to have no issue.

Three times is an enemy action

Then I’m well past three to conclude there’s something awry here.

I took those two links that did not make it to my email and tried another test – sending both through the messages app to a friend and emailing them to that friend’s Gmail address.  Both messages made it to my friend via the standard messages app, but the email?

More broadly I’ve noticed that the vast majority of emails from that account of mine have been flagged as spam and are being kicked back – not just to openly-Gmail accounts, but to any account that uses google as their host, even customized domains.  This is my personal/political email, which I use to send people political emails as well as just staying in touch.  I use separate emails to divide the above topics from work-related things, for which I use a different email address (albeit with the same ISP), which has not had any non-delivery issues.  I am already transitioning emails from that censored account to one of my Protonmail accounts.

Slowly-slowly the flow of information is being choked.  A couple of blogs I know have been kicked off their hosts due to their content, and I think it will get worse.  At least gmail let me know that my emails were being dumped – I predict that soon you’ll hit SEND and you’ll never know it was deep-sixed unless you speak with the intended recipient by voice.  Doubtless algorithms & AI will learn to do the same to follow-up emails where you ask, “Did you get my message with XYZ info”?  And thus, absent an actual conversation, you’ll never know the information you sent was not received.  Nor will these emails go to spam where they could be found if people check their spam folders but will outright just be ghosted.

Whether it’s information that questions The Narrative on Covid, or migration/immigration, or the 2020 election, or just anything that merely opposes our new Democrat Fascist overlords, look for the noose to tighten:

BUCKLE UP: Biden Regime Steps Up Attacks To Censor Conservative Media For “Misinformation”

And not just electronically:

Top Health Officer Orders Australians: ‘Don’t Have a Conversation With Each Other

LED TO THE SLAUGHTER

George Washington is someone I admire for an enormous list of reasons, including his mastery of emotions – with which he struggled apparently – and his surrendering of power at the end of two terms.  He has three quotes that apply here.  The first two: 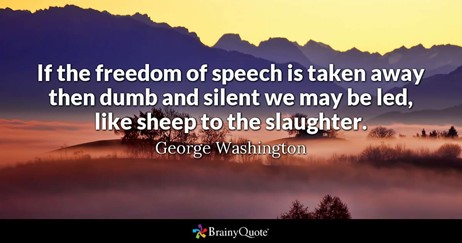 The rising Fascists in Washington are determined to squelch all information that doesn’t match what they want us to believe.  Like THE BIG LIE, they want to prevent any alternative from being presented.  And thus, a third quote by Washington’s applies:

Hashem help us all in these perilous times.

Prep.  Arm up.  Make alliances.  And as you do so, and find people with whom you don’t agree 100%, but perhaps 80%, remember the old Klingon proverb: