Just one more example of a decades-old trend among teachers – and now they are no longer hiding it. Go ahead Teachers, change my mind. I’m not going to put the whole thing up but here are the “best of the worst.” Reformatted, emphasis mine:

“Rebecca  Murphy” attended the California Teachers Association (CTA) conference in late October. She told The Epoch Times the teachers “mocked” parents for their concerns, and suggested they know better than parents about what’s best for their children.

“They laughed at the parents,” Murphy said. 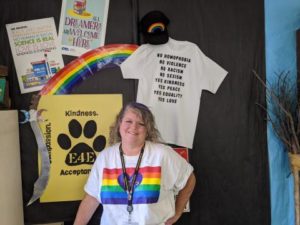 As of this writing, they are still listed as staff on the Spreckels District roster.

Or could the title have been “Teachers abusing children to further their Ideology“? Seems to fit – and it is clear that Teachers are “grooming” their students as in “how to recruit students into LGBTQ clubs” just like Steve pointed out; it’s the normalization of what used to be considered deviancy.  What else could the next thing be that Teachers may be pushing after homosexuality and Transgenderism?

This is the Age in sexualizing minor children – which is exactly what Teachers are doing even as Parents are trying to keep their children as innocent as possible. Who should have the upper hand in this, and who is actively MAKING it their upper hand? Is this a Proper Role of Government?

School Boards are going all in as well else they’d be shutting it down. How many Districts have adopted the NHSBA’s Policy JBAB here in NH, that essentially is pushing Transgenderism (or at least, turning each District upside in support of it), they’re all in as well. To the point of throwing away your childrens’ Constitutional Rights and calling YOU Domestic Terrorists if you object.  Or a Bigot. Or homophobe / transphobe / misogynist / child abuser.

Mocking and laughing is the epitome of ridicule – they don’t respect you, Parents. Not one bit.   We see this is School District after School District. Why else do School Boards “Silence” and why do Democrats as a Party do the same when their largest Unionized donor base (er, Teachers Unions).  Even a Republican here in NH – NH Governor Chris Sununu – took a shot at someone who is on the side of Parents – his own NH Dept of Ed Commissioner Frank Edelblut when he spoke at the Government Integrity Project’s “Empower Parents” conference.

Sidenote: hey Republican Parents, remember this in November – Sununu, by his own words:

“Given this fringe group’s history and support of anti-government actions, the Commissioner’s decision to attend in his official capacity was inappropriate. He has given me his assurances that he will use better discretion going forward.”

Better Discretion? That would translate to “I’m running to retire Chris Sununu; he doesn’t think Parents are needed either.” Edelblut spoke to empower YOU; Sununu sounds like Ray Buckley in flacking for Teachers Unions.

Back to the piece – and this is what is so important that Sununu either misses – or willfully is ignoring:

However, according to Murphy, the purpose of conference in Palm Springs appeared to be about teachers showing other teachers how to undermine the authority of parents and school administrators and conceal activities related to gender inclusion and sexual orientation from them. The three classes Murphy attended were designed to recruit middle school students to GSA clubs, she said. “The overarching theme of the classes that I attended were California Teachers instructing other teachers on how to sneak in the LGBTQ+ curriculum in a manner that does not alert parents,” Murphy said.

So, Parents, do your schools have such “Ally” groups?  How many of those groups promote Christian or Jewish affinity school clubs?  Zero, I bet – teachers are swinging in only one direction and it isn’t Christian values (or even respecting those that hold to such). Why else is SAU16 Exeter School District essentially that freshman football player a bigot by totally favoring the unconstitutionallity of violating his Free Speech rights.

And Teachers are figuring out ALL the angles to accomplish THEIR Morality imperatives and not leaving a trail that Parents can go “THAT’S WRONG!”

Caldeira and Baraki led a workshop called “How we run a ‘GSA’ in Conservative Communities,” and they described the obstacles they faced as activist teachers in concealing the activities of these clubs from parents.  In the audio clip, Caldeira advised teachers who lead LGBTQ clubs to maintain an air of plausible deniability so they can play dumb if they are questioned by parents.

“Because we are not official, we have no club rosters. We keep no records,” said Caldeira, who is also an LGBTQ club leader. “In fact, sometimes we don’t really want to keep records because if parents get upset that their kids are coming? We’re like, ‘Yeah, I don’t know. Maybe they came?’ You know, we would never want a kid to get in trouble for attending if their parents are upset.”

And keeping their hands clean at the same time. Exactly like how Policy JBAB outlines how District staffs can lie to Parents by both omission and commission.

Baraki backed up Caldeira’s advice, suggesting activist teachers to disguise the nature of GSA clubs by calling them something less obvious. Baraki provided an example of this deception, pointing out she avoided naming her LGBTQ club a GSA. Instead, she called it the “Equity Club” and later changed the name to the “You Be You” club. The teachers bragged about spying on students’ online searches and activity as well as eavesdropping on their conversations to identify and recruit sixth-grade students into these LGBTQ clubs whose membership rolls are kept hidden from parents.

Spying on their students to groom them for their clubs – is this getting into “fetish” territory?  That being indoctrinating the kids sexually or the feeling they’ve put another one over Parents? Or a two-fer?

They suggested that parents who refuse to call their child by pronouns of the child’s choosing should be arrested and charged with child abuse, Murphy said.

And we’re back to Lenin on having the children on this part:

Caldeira also spoke about how she controls morning announcements at the school. “That’s another type of strategy I can give you,” she said. “I’m the one who controls the messaging. Everybody says, ‘Oh, Ms. Caldeira, you’re so sweet, you volunteered to do that.’ Of course, I’m so sweet that I volunteered to do that, because then I control the information that goes out. And, for the first time this year, students have been allowed to put openly LGBT content into our morning announcement slides.”

The District took notice and has put some “obstacles” in place but will it be enough?  Probably not; teachers hate Parents so much they’ll figure out something else. And those obstacles may only be for legal purposes because I’m betting some parents are going to sue.

The takeaway for me is:

This is just another in a long series of articles that show that the Teachers believe your kids are theirs to do with as THEY want – stay out of the way, Parents!