CARTOON (and a lead-in essay): When Leviathan Rise... - Granite Grok
Skip to content

This is not the standard cartoon post – last one here – but rather there’s a backstory to the generation of the concept that I want to share as the lead-in to the posting of my latest cartoon concept.

The preamble to the Navy version of the Warrior Song (video, 5:43) has a magnificent conclusion, but I’ll transcribe the whole thing for you.

The Eagle, born by freedom won, yet held, in precarious station –

set upon defense and steeled his will, to guard and protect his new nation.

So he resolved, defiant, of all who would challenge his right to be free

Born to go into harm’s way – come all!  Ye hell or high waters be damned!

No lightening, no thunder, nor hurricane gale can stand in the face of his wrath!

Be he beneath his enemy’s feet, or by cloud, where their gaze can not go…

shall shake to the core of his soul… 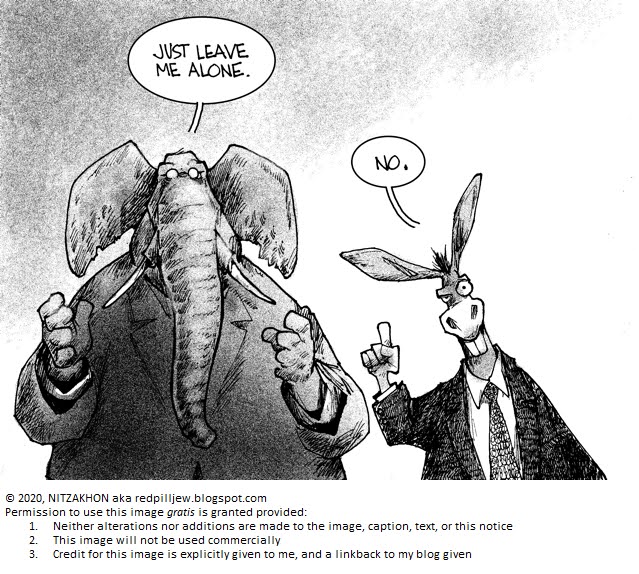 The above one I had done completely captures the essential distilled difference between Left and Right.  At least, IMHO.  Though here’s another version outlining their vote-buying strategy:

I am barely smart and experienced enough to run my own life and work with my kids as best I can.  As I keep telling them, “I am not a used parent” and, thus, am learning as I go even as they learn as they develop through their youth.  With no doubt whatsoever I know I am not qualified to run anyone else’s life.

Yet the Left believes itself qualified to do so.  This is the inherent arrogance, the vanity, of the Left. 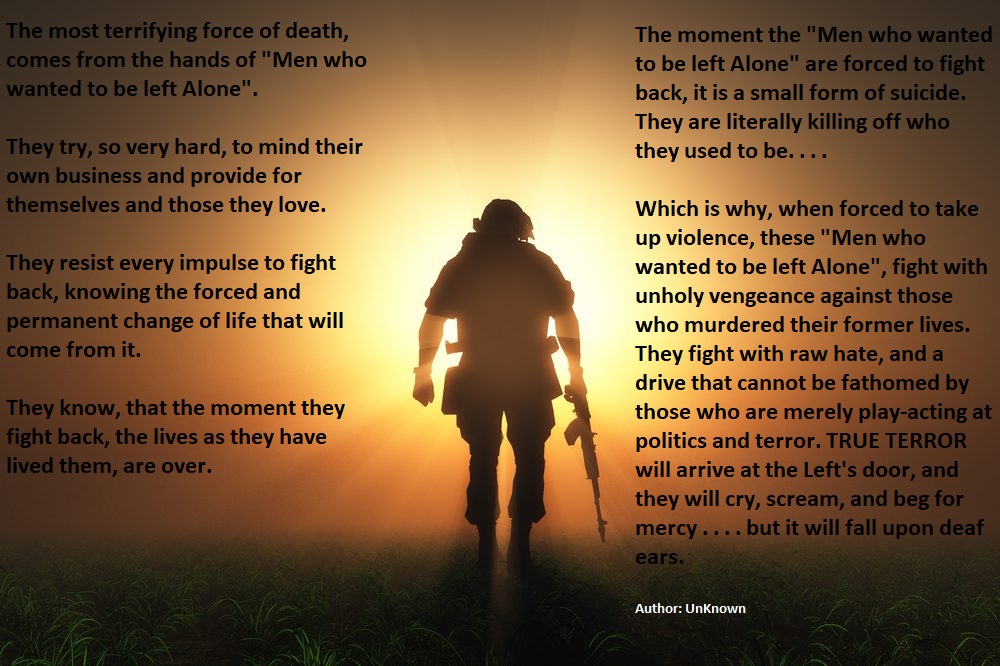 So in writing The Jab: A Rite of Passage based on the article that sparked that essay I found the author’s website, and through there found this piece (link in the original, bolding added):

Our elites’ disassociation from the reality of the life lived by the rest of us comes in part from a conviction of superiority. In the article “The Dangers of Ego in Leadership,” on the executive training website Kashbox Coaching, the author writes that a leader’s inflated ego comes from “a sense of superiority and certainty that exceeds the bounds of confidence and talent.” It is this kind of egotism, which some might call narcissism, that reigns in our ruling class. The members of that class and many of their followers believe they have the right to dictate to the rest of us because they think of us as their inferiors. “Because of the need to protect their sense of superiority,” the executive coach tells us, “egotists are disconnected from the world, often naïve about its workings.”

Ignorance of the law, as the saying goes, is not an excuse. Nor is ignorance of those one wishes to govern. Someday—maybe not now, maybe not soon, but someday—a reckoning is coming for these people.

It’s a definite theme of arrogance, which is definitely seen in Sowell’s two books The Vision of the Anointed: Self-Congratulation as a Basis for Social Policy and Intellectuals and Society (Revised), within which he examines the Left’s addiction to theory divorced from results. So I’m most assuredly not alone in seeing this.  Echoing this tyranny of the woke uber-intellects is a paragraph from another site (bolding added):

Note, too, that the influence of the “Party” over everyday life extends far beyond the business sphere.  We’re seeing similar attempts to impose ideology over law, and political correctness over our constitution, in many walks of life.  (Consider the Loudon County, Virginia, and its school board, trampling roughshod over parental rights and the views of its citizens in an attempt to impose “woke” ideology in the schools it controls.  It’s been taken over by extremists, who will brook no challenge to their authority, legal or otherwise.  It’s going to take strong measures to get rid of them.  One can only hope the citizens of Loudon County have the guts and political will to do so, otherwise the jackboot will rest upon their necks forever.)

Make a family like mine have to turn down the heat to 60 degrees in the winter so I don’t have a utility bill that’s half as much as my mortgage payment.

Make me have to choose between new shoes for my kids or red meat in my spaghetti sauce because I can’t budget both in the same pay period.

Make taking my family to a sit-down chain restaurant for burgers and chicken strips a birthdays and anniversary type special occasion.

Take away the upper middle-class quality of life that I worked so hard for, the thing that keeps me in line, and see what happens.

Utterly destroy the middle-class lives of Middle American professionals by cutting the value of their middle-class salaries in half.

Take away a lifetime of hard work and a achievement in their careers and see how many of them remain peaceful.

And repeating (italics in original, bolding removed and my own added):

We’re well past the point where moderate means can be of any use whatsoever. Only radical measures can avail us now. Too many of those able to clearly identify the problem and even recognize the iron-hard seriousness of our plight are nonetheless not yet ready or able to make the final, terrifying leap into full acknowledgment of the one non-negotiable imperative: That Team Liberty MUST prevail, no matter how terrible the measures required to gain ultimate victory over the soulless abominations presently waging all-out war against us.

THE BREATH BEFORE THE PLUNGE 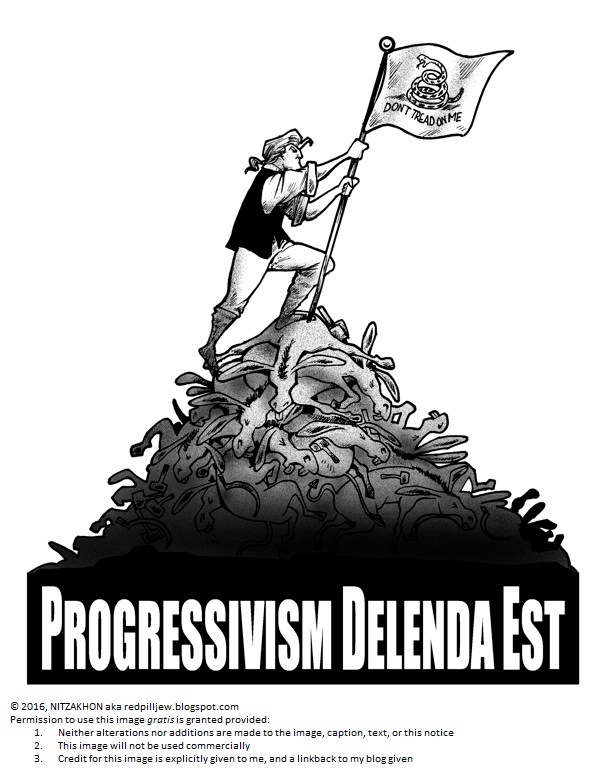 As I said in The Avalanche Has Already Started and Converging Downturns, I don’t want to see spicy time arrive; only a fool (or a globalist thinking that utopia will arise after) wants that.  But it’s coming – I am reinforced by Peter Grant (italics replaced by underlining):

Why should we expect to get away with anything less?  That’s what it’s going to take to defeat the extremist evil that currently confronts us and our nation.

We can’t ignore them and hope they’ll go away, because they won’t ignore us, and they won’t go away or rest until we’ve knuckled under to their demands and obeyed them.

We can’t deter them.  We can only stop them, by any and all means necessary.

I shudder to think what will be necessary.  But soon, we must do what must be done… or perish. 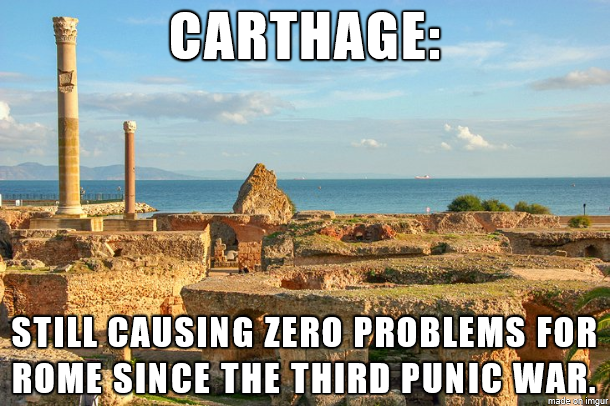 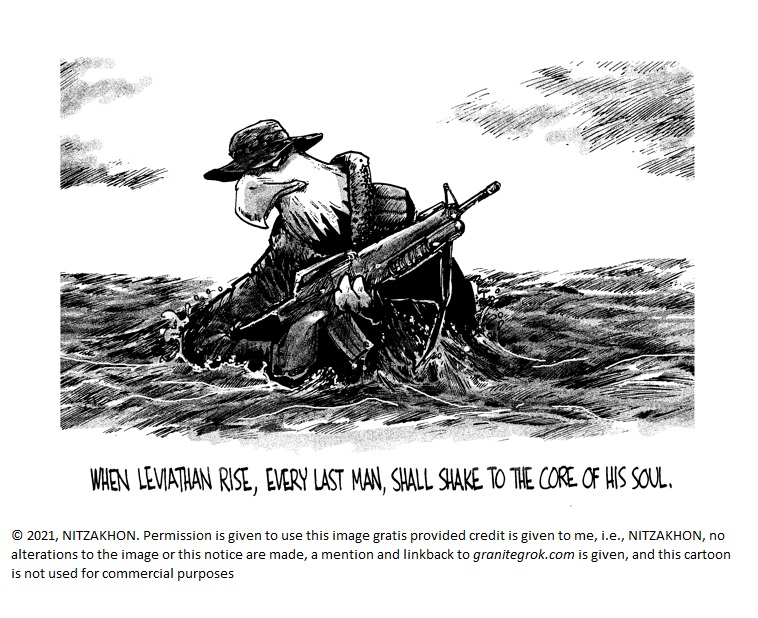