In Potassium Metathorinate I described a sci-fi story with the plot device of a hallucinogenic additive in the population’s food that made them compliant, obedient, and lacking of any curiosity about anything contrary to The Narrative presented by the government.

Barring something in the water, or air, or food, or whatever, how do you explain these instances – among legion – of people who are explaining away athlete heart attacks, kids’ heart attacks, etc.?  Because it feels like an utterly desperate attempt to avoid facing the mRNA elephant in the room.

Climate Change May Cause Increased Rates of Heart Defects in Babies 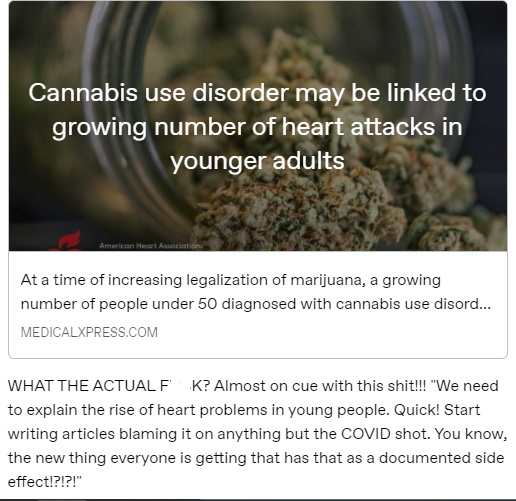 Yes, seriously.  Despite decades – centuries – of marijuana use, suddenly this is a thing?

People die, in unprecedented numbers – and not only is it explained away, people grieving over a vaccine death still urge others to get it:

And from the Grok:

Are An Alarming Number of Athletes Dropping Dead After Getting the COVID Jab?

Why can’t anyone explain how these 14 kids died after getting vaccinated?

FOURTEEN CHILDREN DEAD, in an unprecedented way.  And nobody’s curious or throwing red flags.  I’d like to throw a red flag on that lack of curiosity.

Satan walks openly, and yet none see him.  The blindness is too widespread to be a mere coincidence.

Note: Going through some severe family issues at home, so will be slowing down.