School District is Wasting Over $153,000 a Year on a Director of Diversity - Granite Grok
Skip to content

Anyone serious about cutting local property taxes has to look at school spending. Administrative overhead, the unproductive labor part of the budget, is killing your rates and is probably already out of control. A problem to which districts like to add with every budget cycle.

This is (at least part of the reason) why the school portion of your local rate is the majority of your tax bill. In exchange for that high-ticket, boutique pricing, you get spat on and looked down upon by the people you employ. The academic results are tepid at best.

And now we’ve added Diversity voodoo to exacerbate the suffering of parents and taxpayers who can now be identified as stupid and racist. It’s a trend in public-Ed, and SAU16 has been leading the charge at your expense. They are adding (sorry, migrating) more unnecessary administrative overhead that pulls the entire focus of public education further away from academics.

And that loss of function does not come cheap.

From page 5 of the FY 2023 Budget Book: “The Joint School Board representatives agree with the concept of moving the DEIJ director position to the SAU 16 budget for the 2022-23 school year so the work could truly be performed on a district-wide basis…” 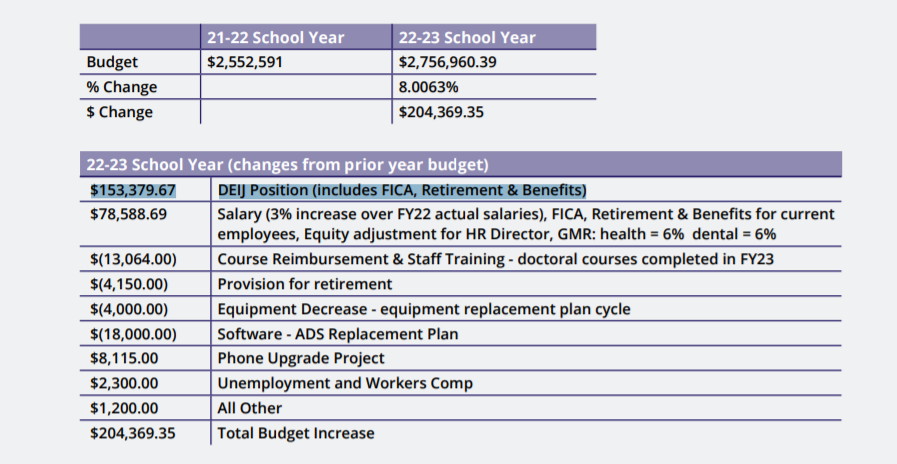 And here’s how they spin it.

The overall increase in the proposed SAU 16 budget, when factoring in expenses that are shifting from the Exeter Cooperative School District, is 1.99%. While the 2022-23 budget for SAU 16 shows just over an 8% increase, 6% of that is for the DEIJ (diversity, equity, inclusion, justice) director position, which is currently funded through the Exeter Regional Cooperative School District budget…

Why not just say 75% of the total projected SAU16 budget increase for FY 2023 is the cost of the Diversity director?

Want to cut 75% of the increase, kill the position, not just the migration, the job.

It is more BS administrative overhead with no academic purpose—quite the opposite. And the legislature isn’t going to save you.

They can write all the laws they want. The problem is local school boards and superintendents pining for the latest fad. They swoon, make some noise about what other districts are doing (without mentioning how it’s screwing over their taxpayers and academics), and then create new “middle-management” positions with more unproductive costs.

Taxpayers need to squeeze the board on every line item, not just on costs or increases but on waste. The DEIJ position is fluff that will continue to puff the budget.

And we’ve not even begun to ask why anyone thinks this person is worth over $153,000 in pay and benefits.

If you want to improve education outcomes, you begin by isolating everything that has nothing to do with reading, math, history, and science. You will not only save money at the local level, you won’t have to waste it at the college level when your kid has to pay extra tuition for remedial math and English before they can even begin to work toward their major.

In an economy where every nickel counts, it is difficult to beat a public school when it comes to wasting other people’s money. Not just SAU16. Your local school budget could go on a diet as well, but only you and your neighbors can make that happen.