Today is primary day for another NH House special election. So, how’d the Democrat plant Neil Wetherbee do? He got creamed. Smoked. Had his clock-cleaned. He lost by a lot!

Here are the official results for the three primary candidates running as Republicans (including Democrat Neil Wetherbee).

These are final. Jodi won by a large margin.

Jim Morgan and Mark Connors will be pissed and ranting all over social media – badmouthing Republicans and maybe us. Maybe. But then, what was it Jim Morgan said?  He didn’t think that GraniteGrok exposing Wetherbee as a Democrat would amount to much. I believe the words were “that’s all you got?”

He also said this. 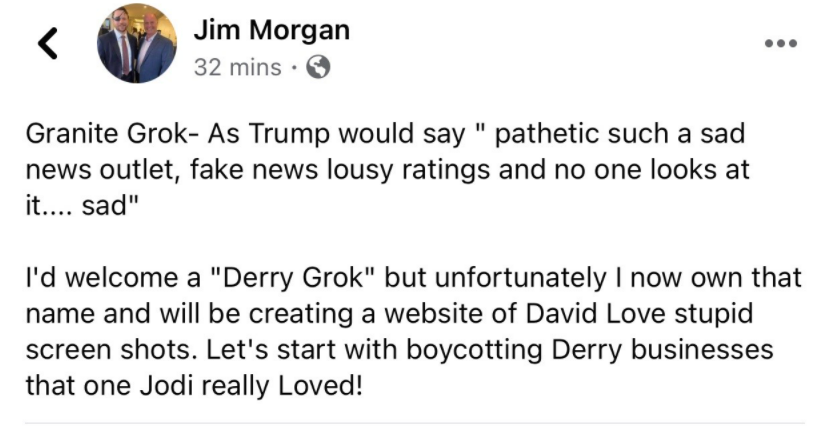 You do that. Let me know how it goes. And as a reminder, you don’t own the correct ‘DerryGrok.’ I can still plant one in your backyard with a click. But enough about us.

We’re not taking any credit here. I think the folks in Derry did the work. Ground game and turnout. That’s what wins any election, special or otherwise. And Republicans are not known for showing up to special elections.

Nice work. Congratulations to Jodi and her supporters. You did enough to get to the next step.

As for Jim and Mark. You lost badly. That happens. I’ve backed a few of those. But you were talking all that smack and losing this badly. That’s embarrassing. Pathetic, such a sad fake Republican you ran that no one wanted to vote for him…it…sad.

Quick Question. Has Neil already changed his party registration? I’m not sure his wife will put up with him being an (R) anymore if he’s not stealing one of their House seats.

Note: Jodi Nelson will face MAry Eisner in the General Election on Dec. 7th to fill the empty House seat, on