“The Right thinks the Left is severely misguided – the Left believes that the Right is Evil!”

Yikes! I know that the Red vs Blue / Right vs Left chasm has been getting worse over time but this is a rather eye-opening poll. Reformatted, emphasis mine: 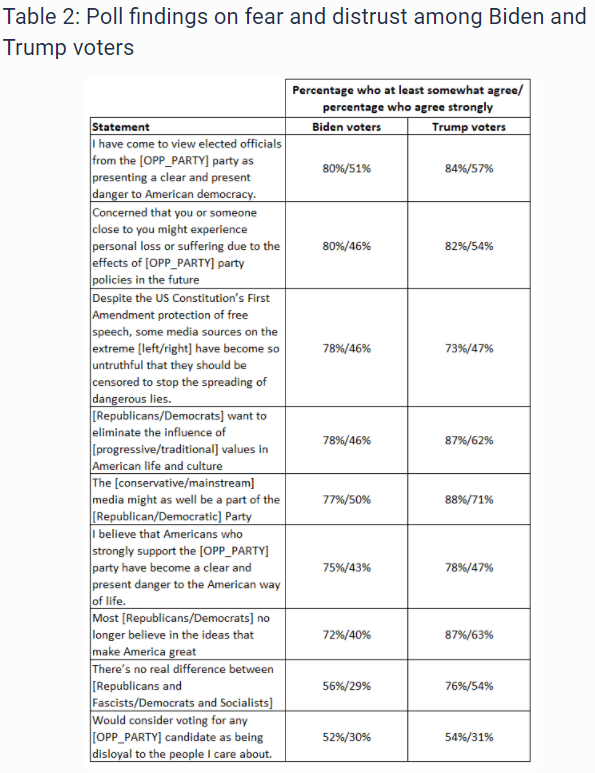 But this is the DANGEROUS result:

Many Trump and Biden voters believe the deck is stacked against them, and their commitment to democracy is wavering. Widespread disillusionment with the other side, and perceptions of a system that is rigged to favor the wealthy and powerful, has undermined faith in our representative democracy:

— On one hand, roughly 80% of Trump and Biden voters view democracy as preferable to any non-democratic kind of government.

— On the other hand, more than 6 in 10 Trump and Biden voters see America as less a representative democracy and more a system that is run by and rigged for the benefit of the wealthy.

— Overall, more than two-thirds support — and one-third strongly — emboldening and empowering strong leaders and taking the law into their own hands when it comes to dealing with people or groups they view as dangerous.

— And their willingness to consider violating democratic tendencies and norms extends beyond the hypothetical and to a dangerous and alarming finding: Roughly 2 in 10 Trump and Biden voters — or more than 31 million Americans — strongly agree it would be better if a “President could take needed actions without being constrained by Congress or courts” (as extrapolated from the results of this survey).

— Roughly 4 in 10 (41%) of Biden and half (52%) of Trump voters at least somewhat agree that it’s time to split the country, favoring blue/red states seceding from the union. 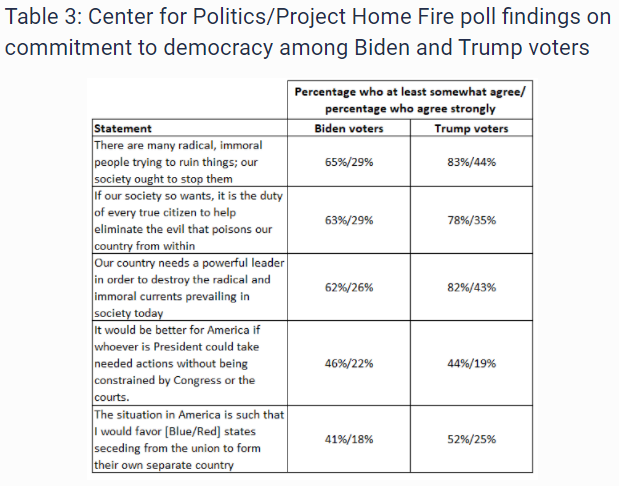 ##4 should be scaring everyone right now!  Imagine that – Ben Franklin would be weeping right now that those percentages basically saying that the Constitutional limitations are of no use at all – get rid of them. If true, we wouldn’t have lost our Republic, we will have chucked it out the window and over the cliff.

I’ve been using the phrase “Elected Monarchy” for a while – meaning a winner-take-all and Rule without limits.  Baddest worst case I could think of. Our REPUBLIC was built on the idea of segregating Powers from factions that would abuse them and that Government was to be LIMITED.

The above results show a free-for-all is brewing and it will be ugly if it continues on this path. Look, I’m as partisan as it comes but my partisanship is not to the Republican Party (although I am affiliated with that Party) but to the Constitution, the Rule of Law, the Right to Private Property, Free Speech, and the Free Expression (and practice) of Religion. Vary from that and I do think you are wrong – DEAD wrong.  Even if it was just a “transition” to an even larger Welfare State. However, the current crop of Democrats are outright Socialists and have no problem in violating the norms by which Government is supposed to be limited. It simply comes down to this:

Government should leave most of us alone and stick to its enumerated Powers vs Socialists who want NO limits to what the Government can do.

You CAN’T have a functional Government (or Country) with that battle going on.

(H/T: Center For Politics at UVA/Larry Sabato via  The Blaze)