Quick Thought: About the Left's Kvetching That "Vaccines Shouldn't Be Political" - Granite Grok
Skip to content

Not only this “lady” but also our current Vice President, Kamala “Toes Up” Harris, made it quite clear that BECAUSE the approved (Emergency, standard) viruses were developed by the Trump Administration showering Big Pharma with billions of dollars under Operation Warp Speed, they were to be shunned:

Citing the Trump administration’s handling of the COVID-19 pandemic, Kamala Harris said that she’d happily take a vaccine that doctors and scientists recommend — but absolutely not one touted by Donald Trump. Asked at Wednesday’s vice-presidential debate whether she would take a vaccine approved by the Trump administration before or after the election, Harris said she’d be the “first in line” to take the vaccine if health experts like Dr. Anthony Fauci recommended it.

Oh, back to Barbara: 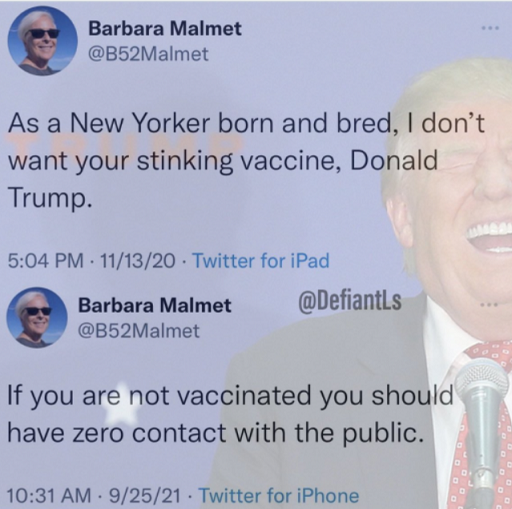 And this is the common refrain. What’s the difference?

Only the letter that follows after a President’s name. The Party affiliation seems to be the ONLY important indicator as to whether a vaccine is good or not. The same drug company, pretty much the same formulation, same delivery protocols.

So the Jabs are now A-OK but you’re the absolute scum of the earth if you don’t get the vaccine – now. How times have flipped.

So how CAN anyone, nowadays, still say with a straight face (and not crossed fingers behind their backs) that the vaccine is NOT a political event? Their own words say the obvious – it simply is.

But not only are we crouching towards a Post-God and a Post-Constitution Society, we’re also leaping to a Post-Truth one as well.  Truth has, in large part, become Political as well and there is little middle ground when Truth remains Objective (absolute values) by the Right and Subjective (ever changing on the political needs) by the Left.

But make no mistake – the Vax IS Political whether the Left sees that Truth or not.