The Cleveland Indians are now the Cleveland Guardians. But the ‘Indians’ were named after an accomplished former player, Louis Sockalexis, an American Indian outfielder for the then Cleveland Spiders.

So, yes – the #Wokeasaures has claimed another victim, and they’ve got some cover.

Wikipedia tries hard to suggest the Spiders did not change their name to the Indians in honor of the first American Indian to play the sport. And there are disputes about who was the first and or why Cleveland changed the name.

But sites dedicated to Louis Sockalexis seem adamant about the distinction.

Louis Francis Sockalexis was the sensation of professional baseball in 1897, featuring the skills of a five-tool player and a comparable charisma that earned him legendary status at any level he ever played. Indeed, Sockalexis was one of those rarest of talents, an athlete held in awe by his fellow athletes, who might be lucky to possess just one of his skills.

And there is no dispute that he was quite the athlete.

HE WAS a man who almost certainly broke professional baseball’s color barrier (several black players, like Moses Fleetwood Walker and William Edward White, earlier attempted ruses or played ever-so-briefly…. but all were immediately halted from enjoying continuing careers once they were identified for their race).

HE WAS a man who was definitively the first-known Native American to play professional baseball, a man who went through the exact same experience Jackie Robinson endured 50 years after him but never-ever gets any credit for doing so.

In other words, in the interest of dopey #wokeism, the Cleveland Indians have changed the name of a team (named to honor a guy who broke glass ceilings and the color barriers) to appease snowflakes and other triggered leftists in the name of racism

Related: Land O Lakes Got Rid of the Indian and Kept the Land

A team that was way ahead of its time when it came to diversity laid low by people who will now have to swear up and down that the Cleveland Spider’s outfielder Was NOT any of those things which sound – if you ask me – a bit racist.

And if you have doubts, imagine if Donald Trump owned the team and he suggested the change.

I rest my case.

And this, mostly so we know where I found the featured image. 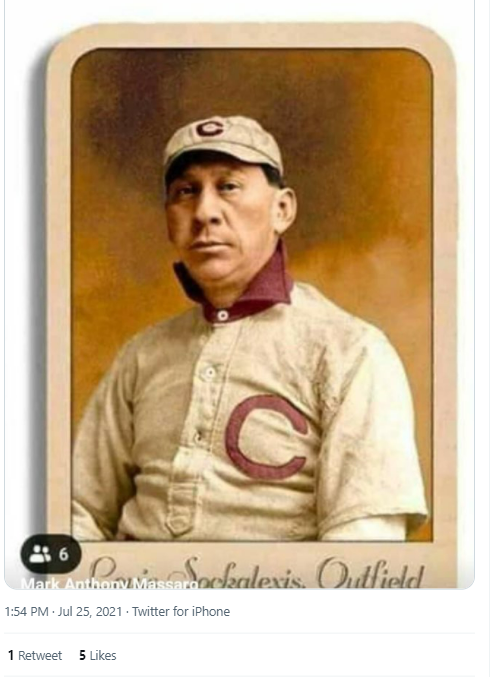