In his 37 years as Director of NIAID, Dr. Fauci has served under five NIH Directors, i.e., Dr. Fauci has been passed over four times for the position of NIH Director.  The Peter Principle as illustrated below states that “In a hierarchy, every employee tends to rise to his level of incompetence.” 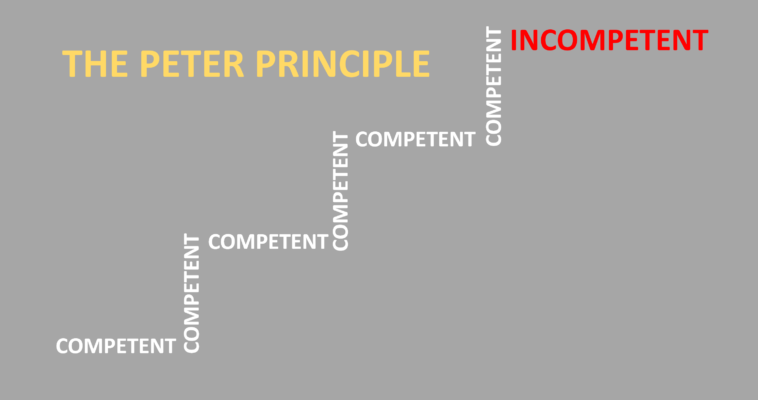 A competent director of an important institute should not step on be leaving himself open to frequent misunderstandings.  Consider the possibility of a Christmas lockdown.  The following is from the transcript of the 3 October 2021 Face the Nation on CBS:

MARGARET BRENNAN: But we can gather for Christmas, or it’s just too soon to tell.

FAUCI: You know, MARGARET, it’s just too soon to tell.

Many of us took this to mean that canceling Christmas gatherings was the current Swamp policy.  On the 4th, Dr. Fauci walked back his Sunday remarks, claiming that he had been “misinterpreted.”

We want to thank Mike Johnson for this Op-Ed. If you have an Op-Ed or LTE
you want us to consider, please submit it to Editor@GraniteGrok.com.

A couple of weeks earlier, Dr. Fauci told Anderson Cooper on CNN that “we could start to get some good control in the spring of 2022.” While this statement was accompanied by the usual Swampy caveats and equivocations, it certainly implies that the science would not be ready for an open Christmas. I’m not sure who misread whom, but a competent leader should be capable of communicating in a manner that avoids confusion.

Embarrassing mistakes are the bane of Swamp creatures who are essentially immune to meaningful punishment.  Swamp creatures, and Directors, in particular, are avid practitioners of risk aversion, not simple risk avoidance, but actual aversion; to avoid mortification.

Dr. Fauci gave the following quote in an interview by Hugh Hewitt:

Now we’re tracking that, the CDC [Centers for Disease Control and Prevention] is tracking that really very carefully, so it’s going to be a balance that we would feel very badly if we all of a sudden said okay, kids, don’t wear masks, then you find out retrospectively that this virus in a very, very strange and unusually way [sic] is really hitting kids really hard. That’s the thing.

Dr. Fauci sets up two interrelated conditions.  The first implies that kids should wear masks to protect against COVID.  The second is a MAYBE statement – maybe the virus will hit “kids really hard,” and perhaps it won’t.  The first Fauci condition, that masks protect children against the virus with no deleterious side effects, is effectively countered in the 8 August article aptly titled “The Case Against Masks for Children” by Doctors Makary and Meissner.  The second Fauci condition, that kids may be hit hard, suffers from a serious lack of supporting data.

Swamp creatures are those unelected bureaucrats that populate the Administrative State.  They can make rules and regulations with the effect of law but without the protections of due process or other Constitutional checks and balances.  The Swamp creature, armed with incompetence, risk aversion, and arrogance, is personified in Dr. Fauci.

There are other specimens.  Stay tuned.

Mike Johnson is a small-government conservative, a live-free-or-die resident of NH, and the author of the e-book John Kerry & PCF-44.  E-mail mnosnhoj@comcast.net