I have long held most Democrats in low regard. It is my firm belief that their ever-leftward dash to full-on communism will be the destruction of our nation, state, and local institutions.

So it goes without saying that there is little they do that surprises me or even angers me, as they generally meet my dim expectations.

But, every once in a while, despite occupying the very depths of our society with regards to their lack of patriotism and obvious hatred of every American tradition, they step forward and drill down even lower. Such is the case with the advertisement placed in this newspaper on Sept. 11. 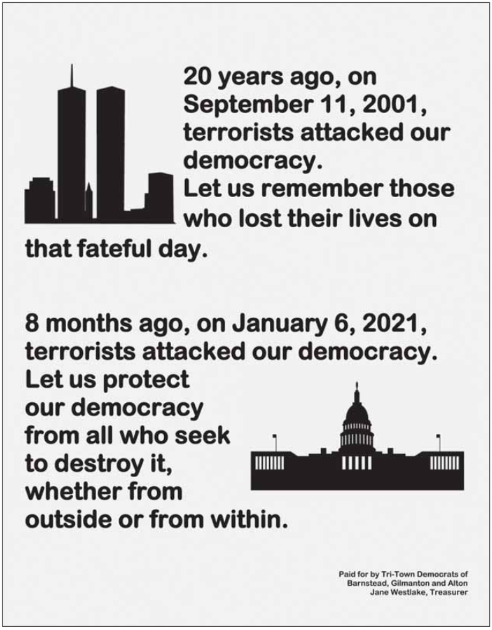 They simply cannot help themselves.

Rather than joining with their fellow Americans to observe the 20th anniversary of the horrific Islamic terrorist attacks that left nearly 3,000 people dead and to honor the selfless and heroic actions of the many first responders, they instead presented this vile, disgusting ad that was purposefully designed and intended to divide rather than unite us on this date.

But that’s how they roll. They have zero compassion or even class when it comes to anything that might be meaningful to a majority of ordinary Americans. Have they no shame at all?

Furthermore, I DO question why The Daily Sun chose even to accept this piece of trash to run in their newspaper – unless it was to help more people come to know how low down and despicable today’s Democrats have become.

If that’s the reason, then it worked.