I’ve known Erick Erickson for year after meeting him at a “State level bloggers conference” way back when the TEA Party movement was just starting to spin up. He’s gone from his Georgia Peach site to helping to found Red State, a successful lawyer, advisor to a number of conservative campaigns, and is a successful radio host and a writer on Substack. I’m a free subscriber and today’s issue shows the hypocritical nature of the Democrats.

They are some ticked off, in the US Senate, that the centuries old Senate Rule (the “Cloture Rule”) that holds that 60 of the 100 Senators must vote affirmatively to move from debating to voting on a particular bill or resolution. While they used it mightily to stymie Trump’s agenda, they want it removed for being “Anti-Democratic”. They really want it removed because the Senate is so evenly split between Rs and Ds, and helped in making ALL politics so hyper-partisan, they know they can’t get 10 Republicans to vote with them to stop that debate and then vote. Knowing that both Democrat-thorns-in -their -sides Manchin (D-WV) and Sinema (D-AZ) aren’t on board with a lot of what they want to do, they are demanding it’s removal such that they would have almost all day long, simple majorities to pass almost anything they want (stupid RINOs).

But with all of their kvetching about getting rid of it, you’d think that they’d at least be intellectually honest AND NOT USE IT, right?  Yeah, that’s not how the Power Hungry Party operates. Even as they are almost having their heads explode in trying to get rid of it, they are still using it. From Erick’s Newsletter (reformatted, emphasis mine):

…Worse than all of that, President Biden and the Democrats knew going into this they did not have the votes.  Instead of trying to fix the problems Americans care about, and polling shows hardly anyone cares about voting rights at the moment, they mounted a failed campaign to change a rule of the Senate and wasted time dividing Americans.

The entire exercise from President Biden and the Democratic leaders on voting rights was a futile exercise in stupidity that raises questions about how out of touch with Americans they really are.  The answer is “a lot.”  Look no further than yesterday in the Senate. A majority of the Senate voted for a measure by Senator Ted Cruz to impose sanctions on the Nord Stream 2 pipeline the Russians are building.

The vote was 55 to 44 with six Democrats siding the Cruz and Senator Rand Paul siding with the Biden Administration. But it was not enough to clear the threshold in the Senate. The Senate Democrat literally used the filibuster yesterday while plotting to kill the filibuster to advance their own agenda.

In order to vote on Cruz’s item, they needed 60 votes. In this case, not enough Senators were sufficiently convinced about the stopping the Russian (who are already squeezing the Europeans on energy gas pricing) to stop debating it (and you thought that Trump was the problem “in colluding with Russia”????). So no vote.  Reason: The Dems filibustered it out of existence to save their ideological kinfolk.

It is an absurdity wrapped in stupidity that shows just how out of touch they are with both Americans and reality itself. Also, please note that no major media outlet covered this bit of hypocrisy yesterday even as reporters have asked Manchin and Sinema daily if their views on the filibuster have changed.

Once again, the hypocrisy of the Democrat Party and the utter in thrall shown, once again, by the US MSM in covering for them.

Oh, a couple of tangential things about this. First, the image above?  It came from this poll: 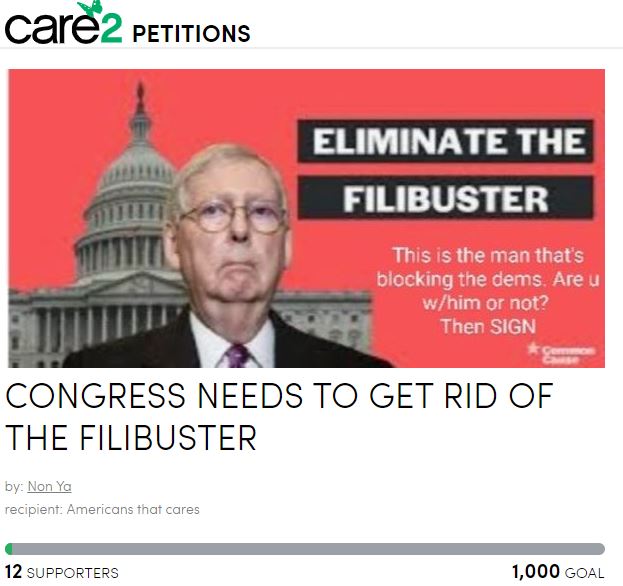 Imagine that, 12 whole supporters. Boy, doesn’t that both show that 1) Care2 petitions is a place no one cares about (probably), and 2) American citizens don’t care.

And the second thing: when I tried to find a copyright / royalty free image for “filibuster”,

WHY DID EVERY SITE KEEP COUGHING UP PIRATE IMAGES??? 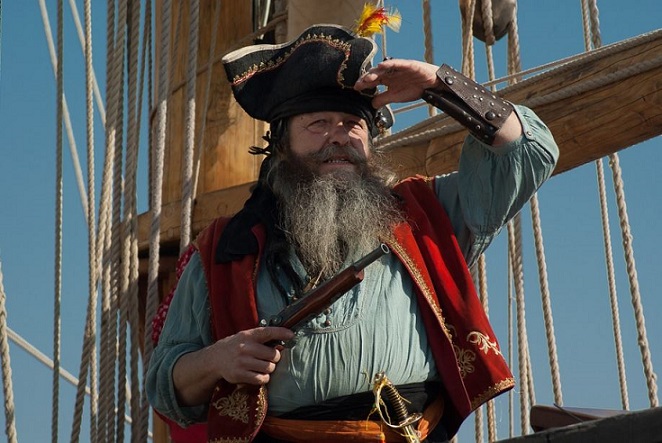 What have a missed in pop culture that has me doing a face palm that I don’t know about?