Brentwood School Board Member Inserts Her Foot In Her Mouth, Again! - Granite Grok
Skip to content

Letty Bedard, a member of the Brentwood (SAU16) School Board, has made some pretty inflammatory comments. However,  at a Selectmen’s meeting the other night, she chose to chastise a selectman because a picture he took made its way to a Granite Grok post.

That Granite Grok post called Letty out for her hypocrisy for mandating masks for children in the school. She was caught in this picture, at a public meeting, unmasked. The Selectman took the picture of a scarecrow, and Letty happened to be near the scarecrow unmasked. Other people saw the picture posted and shared it. It finally made its way to Granite Grok. 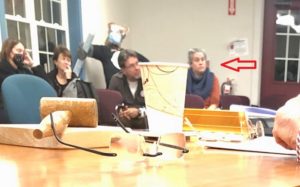 Letty addressed the Selectman for taking a picture of her at a public meeting, which is perfectly legal. But he didn’t take a picture of her, he took a picture of the scarecrow and she happened to be in it without a mask on. (go to: 28:20 to hear the entire conversation… note that she decided to wear a mask to this meeting)

This is similar to a story that was posted when Bob Hall’s mother celebrated her 90th birthday at St. Michael’s in Exeter. Bob Hall, a Kensington (SAU16) School Board Member, was also maskless at this celebration but voted to keep children in the school masked. Parents are fed up with this kind of hypocrisy. Both of these school board members are forcing children to wear masks at school, but seem perfectly ok with not wearing masks themselves.

It gets worse. Letty has posted on her social media account that the unvaccinated are “filthy animals.”

At the Selectmen’s meeting, she said that she was referring to her own children when she posted that. But a few months ago, a parent confronted her after reading that comment and explained to Letty how she took it personally. It was inappropriate for a school board member to post that the unvaccinated are “filthy animals.”  Now Letty is saying that her comment was aimed at her own children. It’s interesting how her story changed when addressing the Selectmen.

At the Selectmen’s meeting, Letty then called children disgusting and gross. She also wished that the children could be vaccinated so they wouldn’t have to wear masks anymore. I think we are getting a glimpse of the disgust Letty has for those who’ve not been vaccinated.  And since the older children have had the opportunity to get vaccinated, why is she not advocating for the removal of masks for them?

In Letty’s address to the Selectman (34:30), she said his conduct was incredibly inappropriate and wondered how his actions were intended to lead to anything other than further strife within their town. But Letty has made inflammatory and inappropriate comments on social media, and even during this meeting.

To top this all off, Letty then referenced the Board of Selectmen handbook which says, “keep in mind that the eyes of Brentwood are upon you, the things you say and do and the people you associate with are a reflection on your character as an official who is elected to represent the Brentwood community”

LETTY: Physician, heal thyself.  In other words, attend to your own faults.

You have shown yourself as a hypocrite on the mask mandate for the children in Brentwood. You’ve made controversial and inflammatory statements about the people you are supposed to be serving, and you have not taken any responsibility for it. Instead, you called outa person who took a picture of a scarecrow that happened to have you in it without a mask. The picture was shared on social media, someone else picked it up and then used it to show your hypocrisy. You owe the Selectman an apology for your condemnation, and then you need to take a long look in the mirror.

Granite Grok used the picture to highlight the hypocrisy of our elected officials who say one thing, but do something else in public. These kinds of actions are posted all over social media now. They have a level of expectation for your children but a different level for themselves. Parents are sick of it.

The people are watching you, Letty. They are going to watch this video of you, and your feelings about disgusting and gross children. As a member of the school board, you called those who were not vaccinated, filthy animals.  Now you are calling the children of parents in the district, disgusting and gross. Why don’t you consider how your actions and words are adding to further strife within your town. Why don’t you see how this is reflecting on your character as an official elected to represent the community of Brentwood as a School Board Member.

Since the vaccinated can still get COVID-19, spread it to other people, be hospitalized, and even die, one can only imagine why you would show such contempt for the unvaccinated children as a member of the Brentwood school board. If you are going to hold others to a high standard, why not hold yourself to that standard too?