No, I don’t think David Ryan has completely abandoned his radical political agenda (think Critical Race Theory). In the SAU16 schools -he’d never do that! But the SAU16 attorneys tried to distance Superintendent Ryan and his push for Diversity, Equity, Inclusion, and Justice (DEIJ), on to the schools within the SAU.

There is a lawsuit pending in SAU16 against David Ryan for intentionally withholding responsive records.

A member of the community filed a 91-a Right to Know Request asking for information on contracts, emails, etc as they pertain to DEIJ in the district. The suit argues that some of the information requested was not submitted to the plaintiff within the time frame allowed.

Here are some of the 43 documents that have not been turned over to the plaintiff: 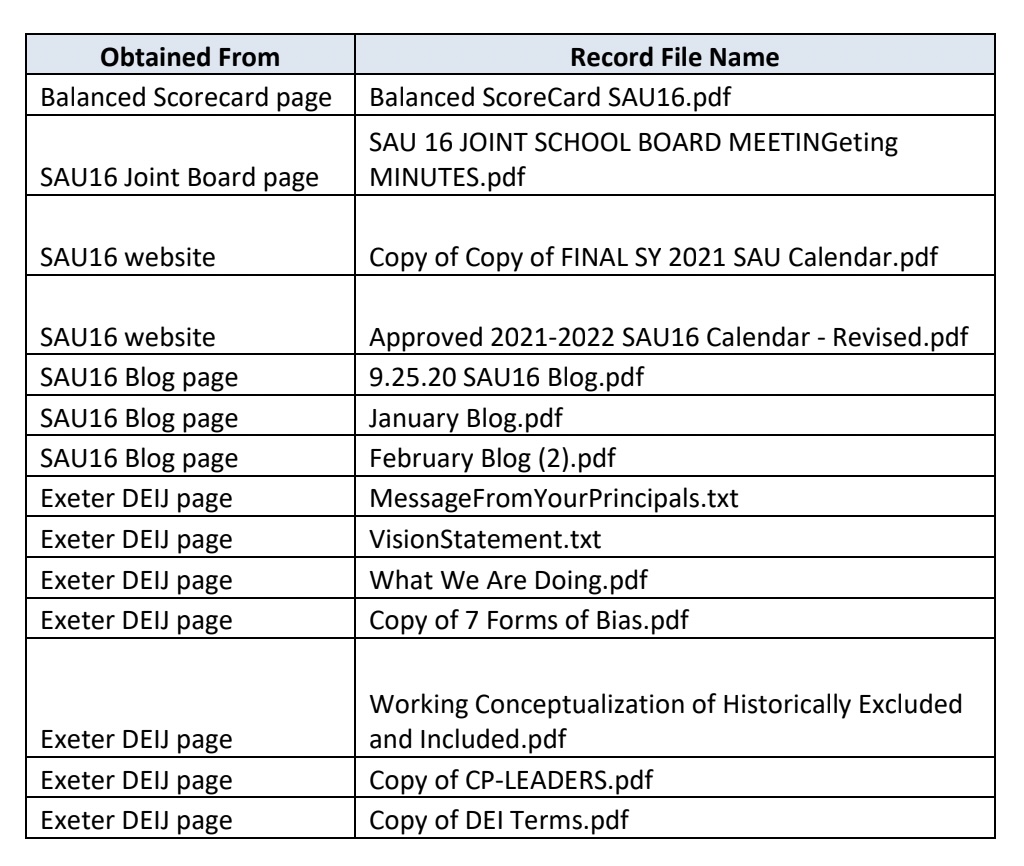 School Districts are public institutions, and parents shouldn’t have to hire attorneys in order to obtain information that should be easily accessible. So why not just make this information available? And if the plaintiff prevails, the district may have to pay his attorney’s fees. That means the taxpayers.

Today the attorney for SAU16 argued that the SAU is a separate entity from the schools within the district. Therefore, the Superintendent isn’t legally obligated to provide the documentation requested. That was countered by the plaintiff’s attorney when he read the duties of the Superintendent as enumerated in state law.

Someone in the crowd asked afterward if the SAU is needed based on the arguments from the SAU attorney. If schools are as autonomous as he described, why have an SAU in place? The SAU attorney seemed to be making the case that there is no need for the SAU!

Anyone who has watched David Ryan, the SAU16 website, and reviewed some of the documentation, knows that DEIJ is and has been David Ryan’s “baby” for a long time.

Take the DEIJ presentation to the community a few months ago.  It featured David Ryan on stage with the new DEIJ Director, two teachers, two coordinators, and two individuals from outside the school district. Not one principal from any of the schools was a part of this panel or presentation. (Lower right-hand corner of the page you will find the video.)

Looking at the website now, and based on the presentation by the district attorneys, one has to wonder why the site was altered to remove DEIJ propaganda from the main SAU16 page.  The SAU16 website continues to provide a link to a DEIJ page, but since DEIJ was given its own page the main page now looks more like a school district website.

Several parents spoke at the Joint Board meeting on October 18th.

One mom caught my attention when she spoke and may have provided the most important information from that evening. If you go to (2:18:15) and listen to her speak about the benchmark testing, she mentions how both of her children are way below grade level in math and reading. She expressed what has frustrated many parents. The children are suffering academically, but the priorities seem to be focused on critical race theory and labeling good parents as weak or a threat.

Looking at the link to the DEIJ website, you can see multiple committees that have been set up to implement this political agenda within the school. This is a discriminatory agenda as defined by state law and by the vendor hired to train the staff, 2 Revolutions. Can you imagine if they put this much effort into helping the children who are below grade level? Can you imagine having a separate page set up to address the middle school rankings that show they were once ranked 13th in New Hampshire, but recent reports show that this standing has withered down to 38?

Can you imagine if the Superintendent focused on academic achievement the way he does DEIJ, especially since by his own admission, they had no racial incidents to report?

David Ryan has driven this agenda using an enormous amount of tax dollars on a new politically motivated DEIJ director,  politically motivated vendors, and for staff training that looked like Critical Race Theory training. Maybe that’s the purpose of making this information so difficult to obtain, if those costs are added up, the taxpayers may not like what they see.

Will they see an enormous amount of money spent on race relations in a district that has no racial incidents?  If they did have any incidents to report, that behavior could be addressed by the staff through a focus on empathy and kindness and even consequences if that behavior continues.

When the school board meeting continued after public comment, they spent about an hour discussing the DEIJ Director’s position within the SAU16 district. Can you imagine if they had spent that much time on how to improve academic achievement, and address directly the children who are below grade level?  They spent no time addressing the mother who spoke, and almost an hour talking about expanding the DEIJ Director’s responsibilities. Maybe there is pressure to justify a $153k for salary and benefits for a position that no one seems to knows anything about.

The DEIJ political agenda will continue. The Superintendent is fully committed and has made that clear to the community.

One thing is clear when it’s convenient, and when there is a judge involved, the impression is that DEIJ was driven at the grassroots level and therefore the Superintendent does not need to share information with those who request it. But anyone who has watched as this agenda was driven from the top-down has to be sitting there thinking that this is not what they’ve witnessed for the past year.

On a side note, I have requested documentation from the school board in Brentwood through a 91-a Right to Know Request. Brentwood is part of SAU16, but I did not include David Ryan on that request. Yet it wasn’t the Brentwood Board Chair who responded to me but David Ryan, Superintendent of SAU16. Why was he involved? Given the argument by the SAU16 attorney, it seems to me he wouldn’t be responding to that request.

Everyone knows David Ryan responds to the 91-a requests. Everyone knows he’s driving the DEIJ agenda in the district. So it was quite a shock to those of us in the audience to hear the SAU16 taxpayer funded attorneys try to distance David Ryan, as Superintendent, from his obligation to the plaintiff. I’m not sure the judge bought it, but we will see.

On another side note. As a parental rights advocate in New Hampshire, I’ve filed 91-a requests to numerous administrators and school boards. There have been many times when an administrator has responded by providing the documents I requested, and additional information I never requested. For instance, they have provided an explanation of what was attached. By their actions, they were making transparent information that explained the documentation they were providing. By law, they do not have to do that, but that provides transparency, and it builds public trust.

Not providing the documentation that the plaintiff requested only adds to the distrust in the community. Way to go!

All of this tax money spent on attorneys to defend why David Ryan refused to turn over documents certainly has more people questioning what he’s trying to hide. The SAU attorney said it’s a heavy burden to gather the information requested. I guess wasting tax dollars on attorneys to spend time defending these actions in front of a judge is a better solution. So much for fiscal responsibility to the taxpayers!

The plaintiff’s attorney called this a shell game, saying they were using the excuse that it’s not us (SAU16), it’s them (individual schools). If you are trying to determine where the buck stops,  they made the case that it’s not with the one guy who’s in charge of the district, Superintendent David Ryan.  When the judge rules in a few days, he will determine where the buck stops.