As I have oft said here on the Grok (and elsewhere), I used to be a climate change alarmist but changed my mind. Note that I do not deny – who could? – that the climate changes but rather I find the case mankind is doing it unproven.

While there are multiple reasons for my shift from one side of that debate to the other, probably the single biggest reason – the “brick on the jeweler’s scale” – was the concealment of data that is rampant in the Climate Change Fraud.

In other words, a SCIENCE depends on the open sharing of data and methodologies so other researchers – both friendly and hostile – can dig into the data and how those numbers were obtained and crunched to see if the results and recommendations are robust against inquiry.

Any censorship in a science, any concealing of data & methods, any refusal of independent checking, and any squelching of dissent & free debate from whatever the Orthodoxy may be are, in my book, automatically causes for distrust in whatever “the consensus” says.  Marry these two quotes, both anonymous, as to why independent verification is so important:

Any data set can be tortured until it confesses.

The first axiom in science is that research will be biased towards results that continue the funding.

Thus, when making claims data & methods must be shared to prevent precisely this kind of event: the skewing of results to further profits or grants.  As the late “Amazing Randi” once said:

The websites Climate Depot, Watts Up With That, Judith Curry, and Real Climate Science, among many others, have hammered on concealed and altered data.  Consider the case of one of the “97% consensus” figures as developed by John Cook from Australia (bolding added):

As Tol explains, the Cook et al paper used an unrepresentative sample, can’t be replicated, and leaves out many useful papers. The study was done by biased observers who disagreed with each other a third of the time, and disagree with the authors of those papers nearly two-thirds of the time. About 75% of the papers in the study were irrelevant in the first place, with nothing to say about the subject matter. Technically, we could call them  “padding”. Cook himself has admitted data quality is low. He refused to release all his data, and even threatened legal action to hide it. (The university claimed it would breach a confidentiality agreement. But in reality, there was no agreement to breach.) As it happens, the data ended up being public anyhow. Tol refers to an “alleged hacker” but, my understanding is that no hack took place, and the “secret” data, that shouldn’t have been a secret, was left on an unguarded server. The word is “incompetence”, and the phrase is “on every level”.

Speaking of data torturing, two examples (both from Real Climate Science – bolding in the quote added): 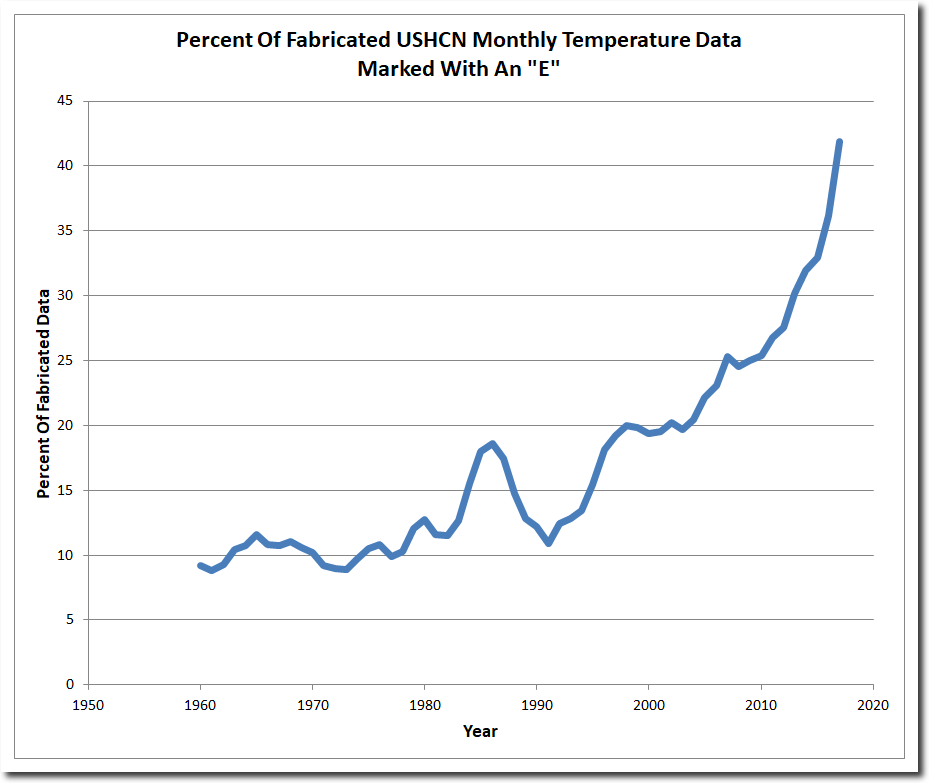 When people make up 42% of the data, they can get any shaped curve they want. This sort of fraud appears shocking, but is standard operating procedure for government climate scientists. NOAA and NASA know perfectly well that the US was not warming.

No wonder the Warmists don’t want people looking at their raw data.  They discuss deleting data rather than letting skeptics have access, and prefer to lose lawsuits rather than having their data and methods analyzed. 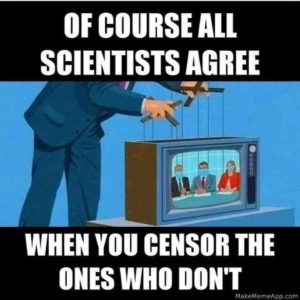 Concealed data and “seat of the pants” judgments are hallmarks of something other than a science.  So what can we say about this: Scientists Sue the FDA for Data it Relied Upon to License Pfizer’s Covid-19 Vaccine (bolding in original):

Transparency regarding this product means, if nothing else, sharing the data the FDA relied upon to license this vaccine.  The definition of “transparency” literally includes “accessibility of information.”  So, when the FDA denies a request to expedite release of this data from a group of highly credentialed scientists from major universities across the country, is that transparency?

If the FDA is committed to transparency, why must a federal lawsuit be filed to timely obtain this data?   Why has the FDA, weeks after the filing of a federal lawsuit, still not agreed to timely release this data?  Why does the FDA persist in delaying its release when even federal law states that, once licensed, the “data and information in the biological product file [for the licensed vaccine] are immediately available for public disclosure.”

Data concealed – therefore suspect.  “Trust us” doesn’t fly when you’re injecting stuff into me… nor should it for anyone with a survival instinct.  And compare & contrast:

So, Can You Mix and Match COVID-19 Vaccines? (bolding added):

The announcement from the CDC and FDA didn’t make any mention of mixing vaccines. The CDC has also stated that the COVID-19 vaccines “are not interchangeable.” “Data on the safety and efficacy of a mixed-product series have not been evaluated. Both doses of the series should be completed with the same product…”

“The biggest concern of course is that we never studied that and so there’s no indication that if you get the Moderna shot, you’re going to boost what Pfizer already did. And so essentially instead of acting like a booster, it acts like a different shot. Almost as if you got vaccinated by something different,” said [Dr. Jill Roberts, Associate Professor at the University of South Florida College of Public Health].

It was also now acceptable for patients to get a booster shot from Moderna, Pfizer of J&J, regardless of which shot or shots they initially received, officials said.

Interchanging drug brands was expected to accelerate the booster campaign, especially among vulnerable people who are institutionalized, according to the FDA.

Based on what data?  What trials?  Was this screened in animals first and what were the results?  What independent reviews of the data have been done?  Inquiring minds – in short supply these days – want to know.  Because, and alas my computer rebooted so I don’t have the link, I saw a quote from some FDA panel hack that – my words but the sentiment is there – they don’t see a reason why not to permit this.  These people are making seat-of-the-pants judgments over stuff being injected into people???  That’s not the standard: the standard needs to be that there is data proving there is no problem.

And why in seven hairy hells is it glossed over that both Moderna and Pfizer eliminated the control group in their human trials – even though the Stage III trials are ongoing until (I think) 2023?  I’d be fired and blackballed if I eliminated my control group, and rightly so.

I had sent Surak an article from the European Journal of Epidemiology that showed no correlation between percentage of Jabbed and falling cases – the authors were disappointed.  Surak, a data guy’s data guy, did an analysis (see independent verification, above) and found not just a positive correlation between Jabs and cases, but an astonishing disinterest in his results (bolding added):

What did your trusty data guy do? Quickly write up the results and send them to the principal author of the original paper, a professor at a well-known university. No answer.

No problem! I just sent this in as a two-page “short communication” to the journal that published the original paper. My discovery does not invalidate the original paper; in some ways it reinforces and strengthens their conclusion.

The journal just replied and said they will not publish it. They couldn’t find anything wrong mathematically, but – they just didn’t think it was all that important.

It isn’t important that higher injection rates are strongly associated with higher rates of new cases? Are you kidding? Or do they want to hide this fact? There are other journals in the world, and I hope someone else will take this.

Now, as Dr. Ryan Cole said in his white coat summit presentation (video, 17 minutes), you can’t see what you don’t look for.  Without going into too much detail, there are – and Surak can correct me in the comments – two kinds of tests, one-tailed, and two-tailed.  A one-tailed test looks for an anticipated change in a specific direction.  If that change in that direction is not there, the results are negative.  A two-tailed test simply looks for a change.  My bet, Surak, is that you took their data and did a two-tail test, saw a correlation, and then a one-tailed test in the other direction, the alternate hypothesis being that more Jabs means more cases?  AmIright?

But this highlights my point – an actual scientist interested in TRUTH welcomes feedback.  As I said here:

I didn’t think of that – thanks for giving me the idea!

When someone is adamantly refusing to even consider information that doesn’t match what’s believed to be true, then it ceases to be a scientific endeavor.

Pfizer (et al) money sure buys a lot these days, doesn’t it?

Independent examination of data and methods are key to scientific integrity, especially when done by skeptics of the claims.  Only in this way does the scientific method work to eliminate researcher and funding-driven bias.  So to conclude, consider what I call an exemplar of GOOD research practice… back in the 1990s economist John Lott studied the effects of concealed carry and what happens when states pass Shall Issue laws and found that concealed carry reduces crime.  Going against The Narrative, he was viciously attacked.  So he offered his data set and notes on how he developed his analytical technique, and copies of the analysis model itself to anyone who asked, including his critics.  Let me repeat:

He shared his data, notes, and methodology with all, even with critics, because he was interested in the truth.

FYI: My follow-up research found that while some found his research overly-weighted towards CCW beneficial effects, the “worst” that was found was that CCW made no difference… certainly there have been no instances where CCW raised crimes as admitted even by his critics.