The scary headlines continue absent much in the way of balanced reporting. No one points out that despite the so-called increase in cases (spike!), your odds of surviving covid, Delta, or whatever they want to call it are still 99% or better.

We’ve crunched the state’s numbers again, and the outlook is rosy, but no one is reporting that. Yes, positive cases are up, but what does that mean? Just like last time, not much.

To over 99.xx percent of us, it means nothing. Not a damn thing. We know the tests are flawed, that has not changed. We also know that a large enough number of people have had it who never got tested and went about their lives with barely any changes –  just any previous bout with a cold or flu.

Without those figures or some level of accuracy, it’s all still a mess, but we can tell you what your odds of surviving are based on demographic totals because we have those numbers.

Looking back to the days before Delta, the truth looked like this.

The top table is based on reported positive tests, those that lead to hospitalization, and how many died.

The second table uses the mortality data and compares it to approximate total populations in the respective age groups. 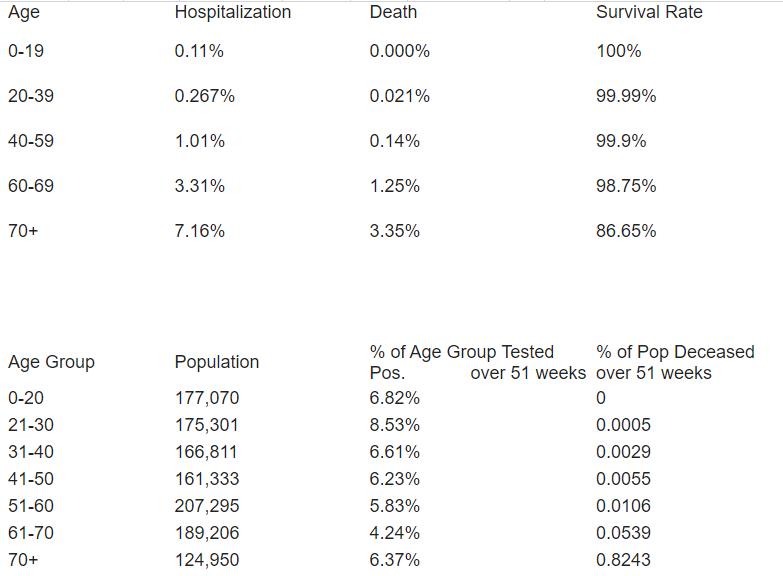 The majority of these tragic losses were our oldest or who also had other illnesses such that any flu might have overwhelmed their system. The one distinction COVID has in that calculus is health care elites forbidding doctors to try whatever they can think of to save patients or trying things sooner rather than later.

We could have saved many more absent misguided directives and limitations coming down from the Federal level.

Despite those political setbacks, the numbers continued to be good for Granite Staters in every age group, even our oldest and most vulnerable.

Here they are broken down by age and state population using state data.

An ‘x; mean that age groups numbers are included in the next line. So, as of Aug 27, ages 0-19 in NH have experienced no mortality from COVID.

These population numbers also include everyone whether they tested positive, negative, their test was flawed, or they never felt the need to get tested. All people in the state during the COVID era, including those you know who never got it and many more you do not.

If you want to know the odds you need to count everyone, not that your odds after a positive test are much less unless you are among the oldest members of our state, and even their odds are not as bad as the plague press would have us believe.

As the fearmongering media and politicians continue to scare people and enact policy based on that fear, know this. Based on the population and age group, you have less than a fraction of one percent chance of getting COVID and dying from it.

If you are healthy and under 65, these numbers continue to suggest that you may have a greater chance of harm or death from the so-called cure, given that any death in those age groups would be a result of treatment, not COVID or any variant.

No, I will not hold my breath waiting for WMUR or the Union Leader to report this. Despite the rise in reported cases, Granite Stater’s still have a nearly 100% chance of surviving covid.

It’s not the plague you’re looking for. That would be the media and political response.

Disclaimer: we are not saying that some people should not be careful; we are saying that it is always your choice but that statistically, these numbers tell us that there is almost zero risk for most Granite Stater’s even if they come into contact with some form of this virus.

Do with those numbers what you will.