Manchester Schools: Setting Your Children on a Path to Racism and Illiteracy - Granite Grok
Skip to content

Girard is currently running for Mayor in Manchester and once served on the Board of School Committee. In the article Girard posted on his website, there is enough information that one of the participants in a chat realizes that she is being accused of being a racist just for being white.

She goes on to ask if that’s fair? 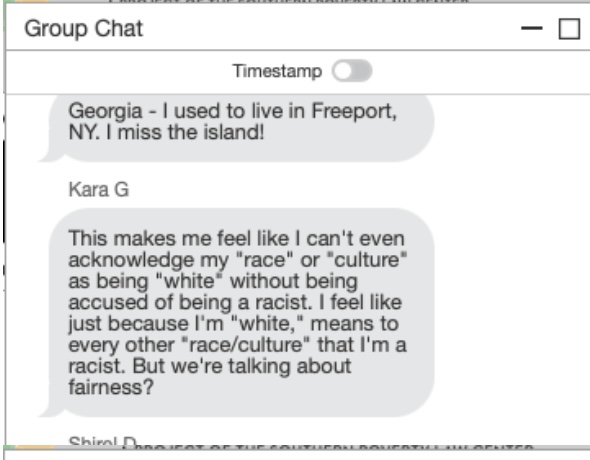 Within the chat Claudia Libis also mentions that they will be aligning the English and Social Studies curriculum with Social Justice Standards. HINT: This is when the academic content is watered down, so your child gets a good dose of self-hatred through shame and blame messaging. Not only will your children be shamed for having white skin, but your child will also be denied some academic content in these subjects. That’s a path to illiteracy in these core academic subjects.

Claudia L goes on to say that all whites are racists. Let’s be honest, that’s stereotyping a group of people, it’s prejudice, and it’s what Critical Race Theory proponents believe. 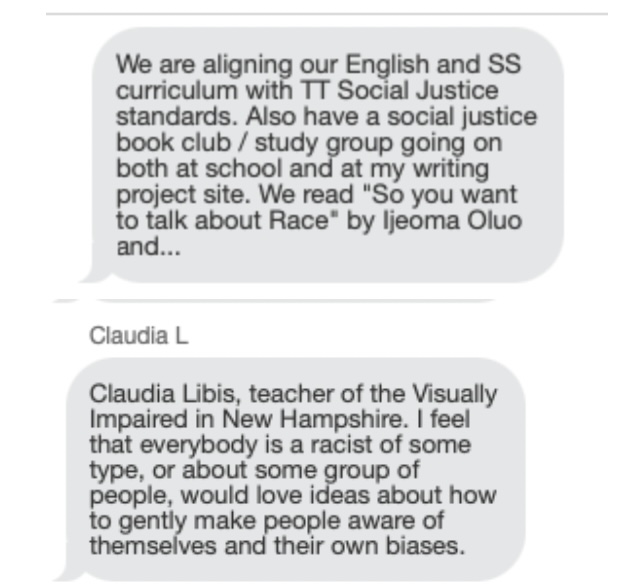 They also warned about anyone who pushed back at this kind of prejudice that they are serving up. Challenging their racist narrative is seen as white fragility – so much for using any critical thinking skills. You will be shamed if you challenge this narrative.

They also talked about going after the teachers too.  Their skin color now determines their character. 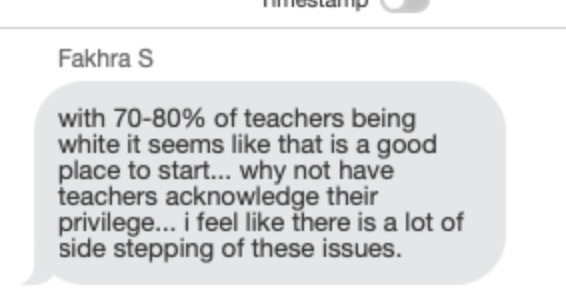 Claudia Libis (above) is listed as a teacher for the visually impaired in the Manchester School District. She also mentioned she has a “social justice” book club/study group at the school and at her writing project site. They read, So You Want to Talk About Race by  Ijeoma Oluo.  Oluo seems to have a lot of pent-up anger towards white men, as you can see in this article about  Sanborn pushing this book on their staff.

“White men believe that greatness and prosperity are coming despite the realities of their financial situation or career, she says. But when the paycheck doesn’t come, white men often blame women and people of color for taking it away.”

So You Want to Talk about Race, author Ijeoma Oluo argues that white supremacy is deeply entrenched in American culture.

“Right now white manhood is on a suicide mission,” Ijeoma Oluo writes in her newest book, Mediocre: The Dangerous Legacy of White Male America. “It is standing at the edge of disaster with a gun in its hands, and it’s willing to take us all down with it.”

In Mediocre, Oluo (author of the bestselling 2018 book So You Want to Talk About Race) chronicles how white men, using genocide and enslavement to lubricate their prosperity and ease, have structured the United States to serve and buttress their sense of entitled superiority at the expense of everybody else. Patriarchal white supremacist terrorism inflicted on people of color, as well as toxic masculine control of women, have been “baked into” the fabric of the United States, Oluo argues.

It’s almost as if these two districts have something against white people. Since these districts are run by white men, shouldn’t they give up their cushy 6-figure salaries to a POC? Based on these book selections, if they believe that all whites are inherently racist and white supremacists, why don’t they set in motion some examples of how they are dismantling their own inherent racism. Why don’t they start setting the example of your own dismantling?

Folks, this is all about discrimination or racism now aimed at white people. This is as evil as discrimination and racism aimed at POC. To the actual racists and supremacists out there, there is nothing good about your self-superiority either. Your racist views are just as bad as the ones peddling this prejudice.

If Carol Libis cares about social justice, why isn’t she focused on improving the academic outcomes and the academic content the students in Manchester are receiving? Why is she advocating for serving up a dose of illiteracy? That doesn’t just hurt children of color. That will hurt all children enrolled in the Manchester public schools.

Damaging a child through a blame and shame curriculum can lead to psychological problems, as Dr. Gary Thompson describes here.  Carol Libis appears to be advocating for psychologically damaging children through her advocacy, whether she understands that or not. She is also advocating for watering down the academics that lead your children to illiteracy in these two important subjects – English and Social Studies.

It is time to start demanding better from the people working in this school district. What these people advocate for will harm the students academically and emotionally. There is nothing good about illiteracy, and someone needs to set these people straight before they hurt your child.