But… that is a misleading statement.

After all of the ballots were run through all four voting machines in the audit, the results for each machine were similar to each other and similar to the hand recount that was overseen by the SOS office on November 12, 2020 (+/- 55 votes).

That indicates that there was nothing nefarious with any of the machines on election day, even though there were significant anomalies in the results for all races on Windham Machine #2 on election day from the top of the ticket and entirely down-ballot, where it appeared that the votes were flipped between Republican and Democrat candidates.

In order to easily understand the potential Smoking Gun that is exposed below, you must first understand how easy it is to rig the election with the AccuVote OS voting machines that are used to count 85%-91% of the votes in NH – including Windham.

Are The Accuvote OS Machines Trustworthy?

No. But don’t take my word for it. Harri Hursti was one of the forensic auditors. He is on record as saying it is easy to “control” the results on election night.

According to excellent reporting by Joe Hoft at the Gateway Pundit, Hursti testified to the NH House Election Law Committee hearings on September 19, 2007, that NH’s Diebold AccuVote OS machines and memory cards are untrustworthy.

“If you are believing on poll tape that doesn’t mean a thing because I can control the whole thing over whatever logic and accuracy that you perform just before the election. Because I have control. I can compare the date, the time. And so in order to be producing fraudulent tape, I will be producing fraudulent tape only on Tuesday evening. And I don’t worry about what ballots go through.”

When Hursti says, “I will be producing fraudulent tape only on Tuesday evening,” he is referring to any Election Day – which historically takes place on Tuesdays. Keep in mind that for this audit, the machines were reset to November 3, 2020 (11/03/20) which is the same day as the general in Windham.  All ballots were processed on 11/03/20!

Prior to the audit, the public became accustomed to the machine numbers that are listed in the paper tapes from election day that was compiled by Gabe Toubia, Tom Murray, and myself.  Here is the header information from the paper tape that identifies Windham Machine #2 as the machine that displayed many anomalies from the November 3, 2020, general election. Notice the Machine ID is “2”. 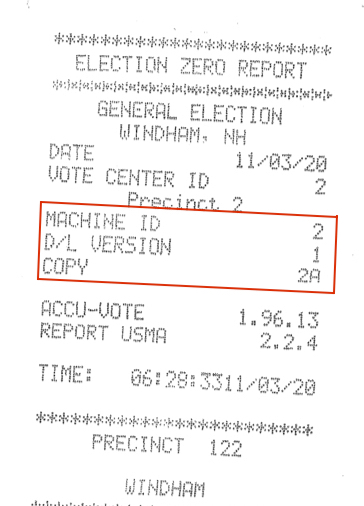 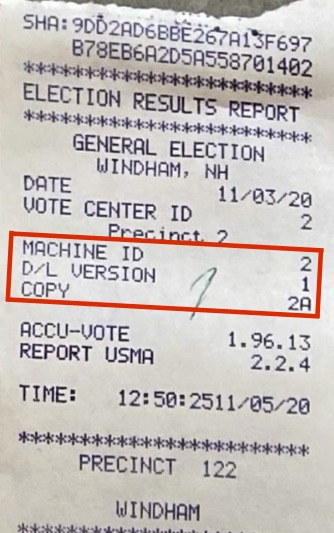 If I understand these correctly, the transaction logs explain the different processes and configuration settings that were performed on each machine before and during the audit.  All four of Windham’s AccuVote machines are displayed below. 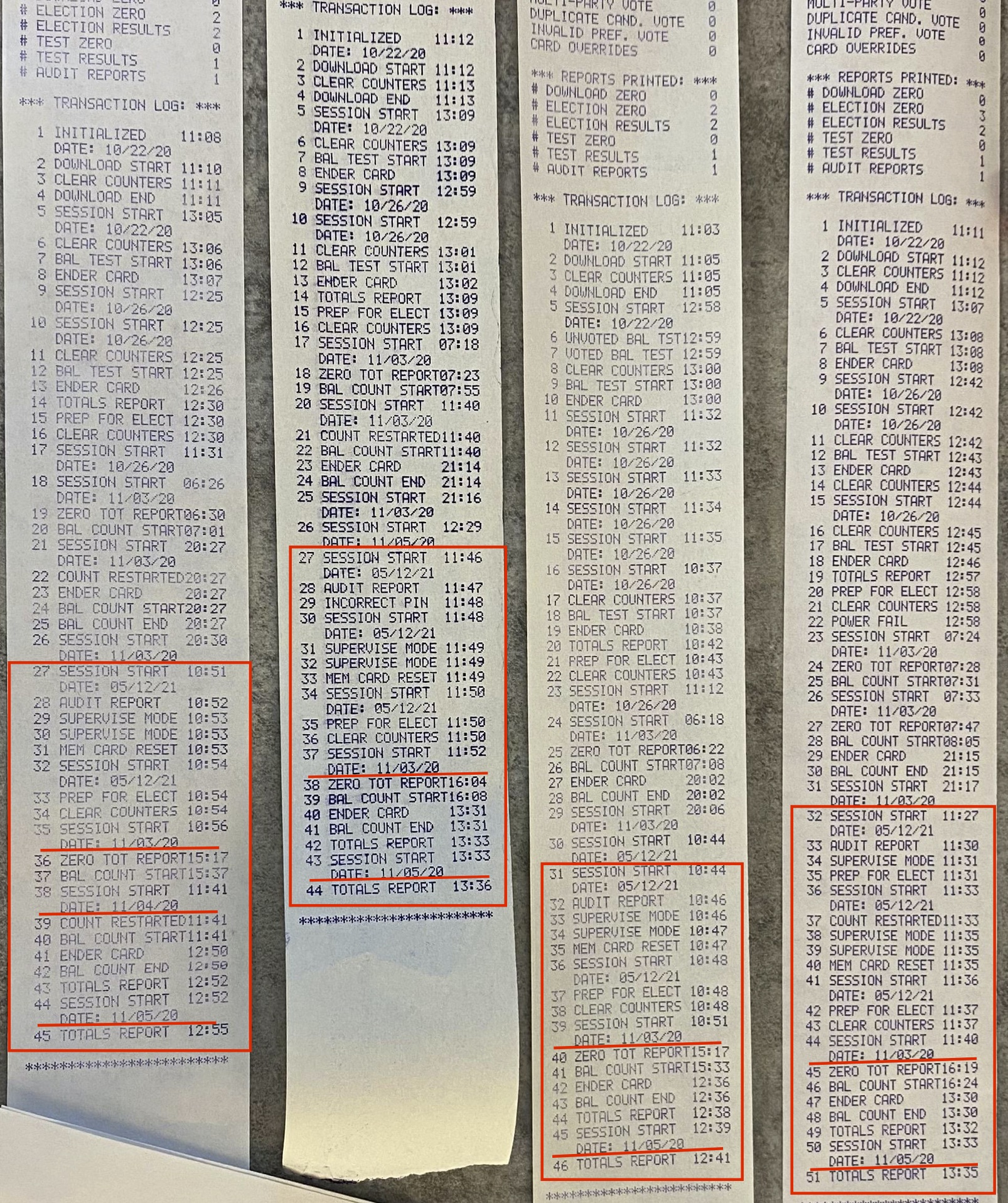 Notice the sequence of operations that have been identified within the red boxes on the paper tapes for all four machines include the following log entries:

Please take a look at each underline in the Transaction Logs which identify SESSION START dates.  You will see an additional underline ONLY for Audit Machine #1 (Windham Machine #2). BEFORE the ballots were fed through Audit Machine #1, the date on that machine was changed from 11/03/20 to 11/04/20 and the “COUNT RESTARTED”.  It is important to note that November 4, 2020, was not election day.  In Hursti speak… that means it was NOT TUESDAY.  Remember Hursti’s testimony to the House Election Law Committee in 2007,

While observing Hursti this past Wednesday when he was reviewing the memory card on one of the machines, it appeared that something clearly disturbed him.  This tweet appears to downplay what he discovered – but it doesn’t provide a satisfactory answer regarding his statement, “One of the cards differs more from others, and will be further studied“.

I want to be clear that I am not accusing Hursti of anything wrong or nefarious. But it is important to remember that it is the memory cards that make it easy to hack the machines to produce “fraudulent tape” but “only on Tuesday evening“, so this is a big deal that warrants answers.

During the audit, there was only one auditor who had access to those memory cards – with no checks and balances. That is unfortunate and disturbing.

Look at the Transaction Logs above and notice there were two “TOTALS REPORTS” printed from each machine.  The totals reports show the results for every race on the ballot for each machine.  The date of the first Totals Report that was printed for Audit Machine #1 (Windham Machine #2) would have been offset by one day from the date on the other three machines.  That date discrepancy would have been a red flag if that report had been made public.  But I don’t believe we were shown those reports where the dates did not match.

Instead, I believe we were only shown the second reports that were printed.  The ones that show the reconfigured “SESSION START” date of 11/05/20 for all machines.  All of those match each other with a report date of 11/05/20.

It appears changing the date was a deliberate action, as can be seen by the fact that 11/03/20 was entered into EVERY machine – including Audit Machine #1 (Windham Machine #2). Why was the date on Audit Machine #1 (Windham Machine #2) subsequently changed to 11/04/20 along with the setting “BAL COUNT START” – BEFORE running the ballots through – knowing that it could potentially alter the result that machine would produce based on Hursti’s statement above.

The public deserves answers from Mr. Hursti, Associate AG Anne Edwards, and the entire AG’s and SOS offices. I have little confidence they will be satisfactorily provided.

For those who read my posts, I am in excellent health, I am not suicidal, I am not depressed and I am not prone to accidents. The same goes for my family.  I say this now because I have been asked multiple times by a significant number of people over the past few weeks if I was afraid for my safety.  My answer has and remains to be “no.”  God will protect me.  But from the treatment I received while at the audit from the AG’s office, I do not have the same level of confidence that our top law enforcement office would offer any level of protection at all.

H/T: To the NH Voter Integrity Group for pointing me in this direction.  They pointed out that the dates had been changed for all of the machines to 11/05/20. That is what got me looking at the unique date discrepancy regarding Audit Machine #1 (Windham Machine #2).