The Three reasons I am voting against this Charter Change

The Board of Aldermen voted (8-6) (Note 1) against placing this Charter Change on the November 2nd ballot and instead supported forming a working committee to vet this issue and bring forth a recommendation for the 2023 election. If approved, the Charter Change aims to increase the number of Commissioners and change control of their appointment giving it to the Mayor rather than the Governor.

The Mayor has only provided broad brush reasons for bringing forth this petition and has been unwilling to provide specific information as to why he should control the nomination of the Police Commissioners (Note 2). Emails have been sent from the Mayor’s address suggesting police reform is necessary. Direct and clear information should be provided to justify the need for reform. He is using a convincing “local control” argument, but his “local control” is really political control rather than direct control whereby voters elect the Commissioners. The Mayor does not nominate our Fire Commissioners or our Public Works Commissioners; the voters elect them. It is unclear why a change in this process is necessary at all.

The Board of Aldermen voted to form a working committee to vet this Police Commissioner issue. This is a more sensible approach to review of this important change in the appointment of our Police Department oversight body. The public should hear the problems and reasons why police reform is necessary. We should learn from other municipalities around the state regarding the management of their police departments. Too many questions exist about this change and it is simply too important to throw it out on a ballot without an earnest effort to educate the public and debate the issue.

More Commissioners does not equate to a Better Commission

Asking the voters to expand the Commission to five members from three members carries potential unintended consequences. While the Mayor has stated that he wants greater diversity on the Commission, the Mayor has a tendency of only appointing people who support his views and are loyal to his causes rather than are competent for the job. His form of diversity is better described as “Mayor centric” diversity, placing emphasis on alignment with his priorities and party loyalty above relevant job experience and competency. This creates a political influence. The most important metric for nominating should be the background and qualifications of the candidate. It is interesting to note, the Charter Change language to increase the Board to five members does not specify appointment of women or minorities to the Commission.

The state just reappointed Commissioner Nick Dahl and the Mayor did not suggest or have a woman or minority candidate submit an application for nomination.

The three current Nashua Police Department (NPD) Commissioners are Nick Dahl, Matt Plante and Jim Tollner. All are Nashua residents.  That qualified as local control. All were originally nominated by then Governor Hassan.   Contact information for the NPD Commissioners is on the NPD website (www.nashuapd.com).   Their next meeting (open to the public) is on Monday, 25 October at 5:30PM at the Nashua Fire Department, 177 Lake Street. Ask questions of your commissioners; they would be more than happy to speak with you.

Laurie Ortolano is running for Nashua Commissioner,  Board of Public Works 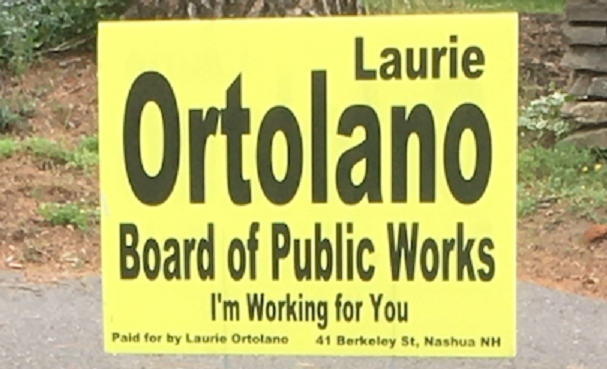 Note 1 – Aldermen who voted against the change:

Note 2. – In early 1990, under Donchess’ first tenure, three Aldermen were indicted and sent to jail for illegal activities as elected officials.