Was This Democrat Congressman’s Nephew Killed by The Pfizer Vaccine? - Granite Grok
Skip to content

When I heard of this extremely heartbreaking story of a 15-year-old male teen drowning in Bedford, NH, on June 20, 2021, I was surprised and saddened. The obituary clearly articulated the short but amazing life Charlie had.

After reading almost every news story published to understand what happened to this bright, vibrant, healthy, athletic, and handsome young man, I, along with several other granite staters, some who know the grieving family personally, realized something didn’t add up.

Many logical questions surrounded his death, such as: Why would a healthy teenager, who is a good swimmer, who rope-swung on dozens of occasions at the same pond, suddenly forget how to swim and die from drowning?

Did he hit his head? Did he accidentally knock himself out? What really happened that day? Many Granite Staters are very confused and very concerned.

We want to thank Kelley Potenza for her Op-Ed. If you have an Op-Ed or LTE
you want us to consider, please submit it to Editor@GraniteGrok.com.

Here’s the story that was published and has been reported from multiple sources:

BEDFORD, N.H. (AP) – A 15-year-old boy who drowned in a pond after he used a rope swing to drop into the water was the nephew of U.S. Rep. Chris Pappas.

Charles Zink was found dead Sunday night in about 15 feet of water in Sebbins Pond in Bedford. Police said when he jumped into the water, he surfaced briefly, then went back under. Police requested help from the Nashua Fire Department dive team.”

Here is the “write up” from the Vaccine Adverse Event Reporting System (VAERS):

“He was in his usual state of good health. 5 days after receiving the vaccine, he complained of brief unilateral shoulder pain (unclear to family which shoulder), which the family attributed to a musculoskeletal source. No chest pains, shortness of breath, or palpitations. He was playing with 2 friends at a community pond, swinging from a rope swing, flipping in the air, and landing in the water feet first. He surfaced, laughed, told his friends “Wow, that hurt!”, then swam toward shore, underwater as was his usual routine. The friends became worried when he did not re-emerge. His body was retrieved by local authorities more than an hour later.”

There is little question from the autopsy results that Charlie suffered from acute heart injury at the time of his death.

It is well known by medical experts that one relatively common sign of cardiac injury displays as unilateral shoulder pain. When Charlie surfaced and said, “Wow, that hurt!” one can conclude he could have been referring to cardiac injury (myocarditis, myocardial infarction, etc.) while hitting the water or some time around the event.

The governments of Sweden, Denmark, and Finland (the countries that the American left emulates most) have suspended the COVID “vaccines” in children. A judge in the UK ordered the government to provide evidence in court to justify these jabs on children because of the injuries they are seeing.

Maybe they are onto something?

Charles Arthur Zink was fascinated with numbers and patterns since birth. His potential and passions were substantial. He dreamed of becoming a world-famous roller-coaster designer and had grand plans over the summer to visit the biggest, boldest, fastest, and craziest coasters all across the united states.

Charlie worked at the family restaurant (a Manchester, NH landmark.) He was an engaging and involved student whose memory was impeccable, with a knack for statistics, details and tackling problem-solving puzzles.

He loved geography, board games, cross-fit and was a great athlete. Basketball was his passion, and he played for many teams over the years and loved basketball stats and watching professional and college games. He had a competitive but incredible team and family spirit.

Charlie’s family has a wonderful opportunity to share the gift and story of their son’s incredible tragedy with New Hampshire and the entire world. Their message can inform many parents with sons and daughters of the risks involved with these injections.

Charlie’s beautiful life will not be in vain, and his tragic story can help save many other families from the unimaginable loss or serious debilitating injury of a child. Charlie Zink’s legacy can be one of shedding light and truth in the deepest of this darkness.

If these conclusions about this story that broke a few days ago are even possibly accurate, where is the outcry?

Why isn’t Congressman Chris Pappas testifying to Congress and on every news station and social media forum saying to halt all “vaccines” for young adults and children until the risks can be properly assessed?

He was all over the news and social media with statements, as were Senator Shaheen, Senator Hassan, Governor Sununu, and many more when Charlie died. I hope and pray the Zink family comes out publicly to share their tragedy. Their story could save children’s lives throughout NH and the united states.

People are furious over Dr. Fauci and the sick atrocities that were done to dogs but remain careless about the thousands of children that are literally human guinea pigs on an untested, rushed-to-the-market, experimental gene therapy (by definition, this injection is NOT a “vaccine”?)

It is criminal for health agencies to downplay myocarditis, pericarditis, blood clotting, severe head pain, seizures, loss of muscle control, severe menstrual bleeding, miscarriages, spontaneous abortions, premature births, infertility concerns, and more, instead of strongly cautioning and warning parents and adults of the many risks, INCLUDING DEATH, involved with these experimental COVID injections.

Just in time for Halloween, we also have the scary news of the approval for jabbing 5-11-year-olds that have a minuscule chance of dying from COVID. Do people realize that children are more likely to die from drowning and fires – and possibly from this experimental “vaccine” – than from COVID itself?

For the love of God and humanity, please protect your children and do not inject them with this great unknown. A good diet of lean protein, fruits and veggies, low sugar and low carb sprinkled with exercise and vitamin D, C, zinc, and a multivitamin is likely all your kiddos need to keep away illness and boost their immune system.

Turn off the mainstream media and educate yourself. And, no matter how uncomfortable these conversations may be, please make sure to share the information with your family and friends… it could, literally, save a life.

The most recent death involves a 12-year-old girl (VAERS I.D. 1784945) who died from a respiratory tract hemorrhage 22 days after receiving her first dose of Pfizer’s vaccine.

Another recent death includes a 15-year-old male who died six days after receiving his first dose of Pfizer’s COVID vaccine. According to his VAERS report (VAERS I.D. 1764974), the previously healthy teen complained of brief unilateral shoulder pain five days after receiving his COVID vaccine. The next day he played with two friends at a community pond, swung on a rope swing, flipped into the air, and landed in the water feet first. He surfaced, laughed and told his friends “Wow, that hurt!” He then swam toward shore underwater, as was his usual routine, but did not re-emerge. 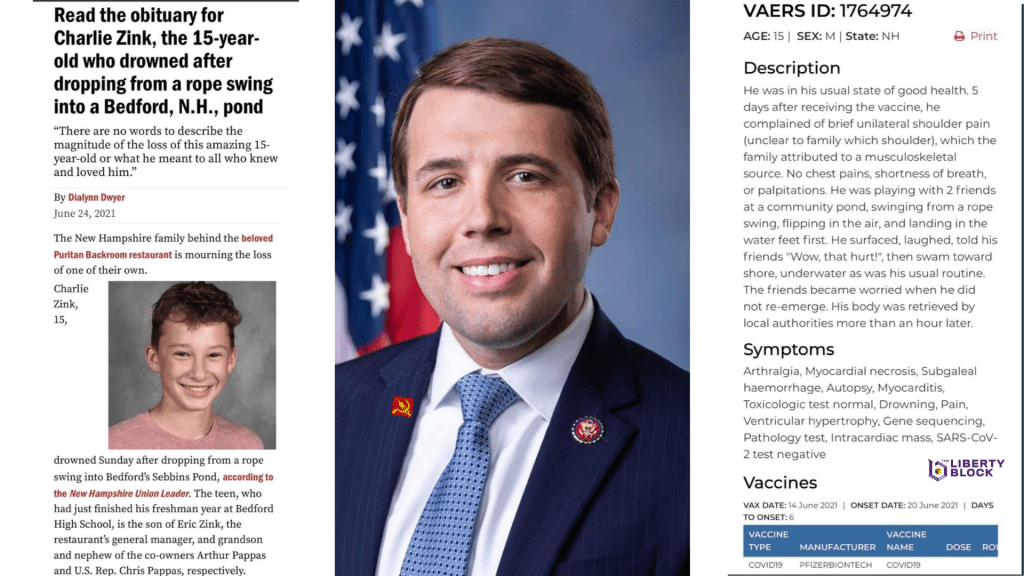 An autopsy showed no external indication of a head injury, but there was a small subgaleal hemorrhage — a rare, but lethal bleeding disorder — over the left occiput. In addition, the boy had a mildly elevated cardiac mass, increased left ventricular wall thickness and small foci of myocardial inflammation of the lateral wall of the left ventricle with myocyte necrosis consistent with myocardial infarction.

Another recent death includes a 16-year-old female (VAERS I.D. 1757635) who complained of fatigue and died one day after receiving Pfizer’s COVID vaccine.

A staff member with 10 years of experience in emergency medicine spoke with Pappas’ office about these concerns and asked Pappas to consider supporting a pause for vaccinating children. He explained that children have nearly zero risk from COVID but have a larger risk from the “vaccine,” meaning that the risk outweighs the benefit.

The congressional staffer insisted that Pappas is a “firm believer in the vaccine,” indicating that he would not even consider saying anything negative about administering the shots to anyone, including children who should not be receiving it.

No one can imagine the pain of having to bury their child. It is not natural. We ask for your continued prayers for the loss that the Zink family is experiencing. Our deepest condolences go out to the Zink family, as the tragedy that they are going through is unimaginable.

Further reading: Scientist Whose Wife Was Injured by COVID Vaccine Tells FDA: ‘Please Do Not Give This to Kids’