The number of athletes suffering heart damage or dying after getting The Jab continues to climb. A “Pandemic” almost entirely ignored by the Legacy American media. They don’t want to slow their own rollout, but the trend has not gone unnoticed or investigated by researchers.

The research itself is relatively dry, but a physician who linked to one of my posts about German Soccer Players dropping dead has a great breakdown of the issue. It is a first look at what is probably causing athletes who have received the mRNA vaccines to suffer heart injury and death.

An athlete’s muscles need a lot of oxygen when they’re playing, and the heart has to pump more blood to meet the oxygen demand,  and it has to beat faster. The rapid heart rate also increases the heart muscles’ oxygen need, and the heart’s blood vessels have to dilate to allow more blood to flow through.

If the heart’s oxygen demand is not met, the cardiac muscles cannot pump blood to the whole body, including the brain, and the brain stops functioning, and the player collapses.

If the player does not get immediate medical attention, the heart muscle dies, and so can the player. Heart attacks result from the lack of oxygen to the heart.

Dr. Santiano MD then explains how “endothelial cells and pericytes in the cardiac blood vessels have to play as a team” to ensure the heart gets enough oxygen when it needs it. 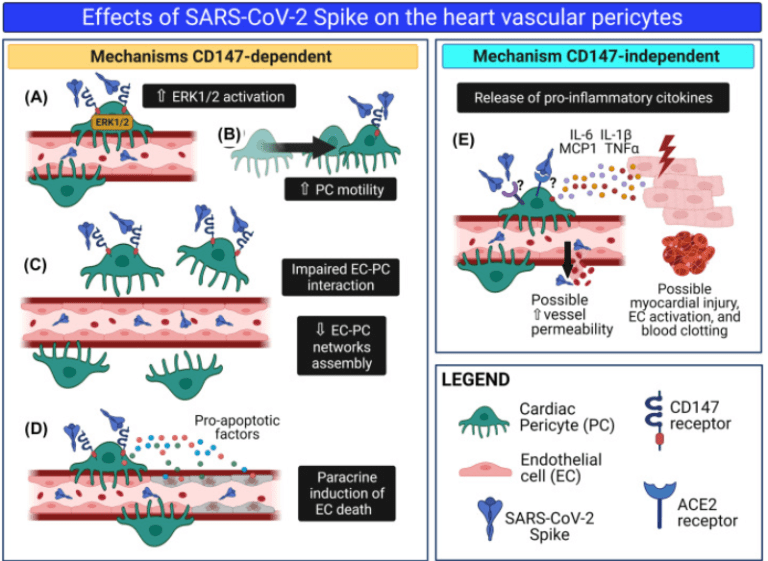 Athletes exerting themselves will enter numerous or even continuous phases when their hearts need more oxygen to meet the demand, where increased blood flow is critical.

The study was from the Bristol Medical School in the UK and published in Clinical Science. In brief, the paper showed that the spike protein of the SARS-CoV-2 can disrupt cardiac pericyte functions independent of a COVID19 infection.

The research found that spike proteins by eliciting pro-inflammatory cytokines such as tumor necrosis factor-alpha (TNF-α), interleukin-1 beta, IL-1β, interleukin-6 IL-6, and monocyte chemoattractant protein-1 MCP1. The same cytokines are increased in patients with severe COVID-19 that have cytokine storms. The cytokines then cause damage to the heart muscles and form blood clots.

The spike proteins also stimulate ERK1 and ERK2 and impair the “teamwork” of the pericytes and endothelial cells. The result is the death of endothelial cells. Once it dies, the cardiac blood vessels can not dilate to meet the demands of a rapidly beating heart.

If all of this is correct, otherwise strong, healthy people who have nothing to fear from COVID19 are being encouraged or forced to receive a “vaccine” that presents a significantly greater threat to their health than SARS CoV2.

Not just athletes. Anyone who has received The Jab™ who engages in similar activity has an increased risk of heart damage or failure.

That won’t in any way stop the Jabasaurus or its advocates, who are probably producing contrary research as I write this. They’ll want to calm the public if this problem could manifest itself years later in children who were jabbed (and didn’t need it) pursue sports as a passion or a career.

If the changes are long-lasting or permanent, that could turn their job or hobby into a death sentence. A defect caused by unnecessary vaccination that could come out of nowhere and kill them.

Their lives would suddenly end just like the athletes throughout 2021, who have collapsed and died before our eyes.