“How many people have died, and why are they covering it up?” That’s what Attorney Thomas Renz wants to know, and he says he has an insider, a whistleblower, who under oath swears that at least 45,000 people have died within three days of getting “The Jab™.”

Leo Holmann.com has the story.

The suit, filed on behalf of America’s Frontline Doctors in U.S. District Court for the Northern District of Alabama, is based on a sworn statement by a government insider under federal whistleblower protection. …

These numbers are very close to what Dr. Peter McCullough reported in a video posted June 20 by LeoHohmann.com, Behind the Vaccine Veil: Doctor cites ‘whistleblowers’ inside CDC who claim injections have already killed 50,000 Americans.

If this gets pulled, you can watch Renz’s remarks here.

“I am telling you we have someone who is sworn under penalty of perjury that there’s been at least 45,000 …and my guess, I’ve been working on this for a while now, is that it’s an immensely higher number. They know it, and they are covering it up. And I want investigations immediately.”

Here’s an excerpt from the whistleblower’s sworn testimony. 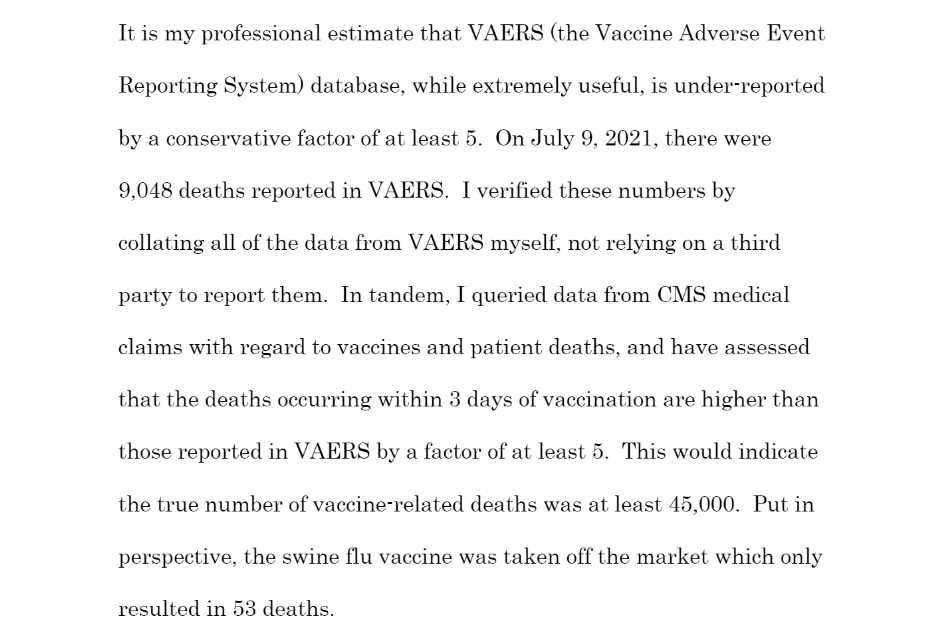 America’s Frontline DOctors has also filed a separate preliminary injunction to stop the use of all COVID vaccines on children. You can review that 67-page document here. (Lots of good stuff in that one).

All because the establishment has been trying to silence AFLDS since they had to gall to announce that Hydroxychloroqunie was, in fact, so safe it was over the country in many countries, a tried and true treatment that worked for years and could save lives.

No need for unhealthy lockdowns, no quarantines, no closed businesses, lost jobs, no remote learning, or hamstrung economies. No shortages or shutdowns, or masks, or mandates, or…rushed experimental vaccines that are killing people.

VAERS admits as much. Thousands have died, but the band plays on when the Swine Flu vaccine was pulled after; according to one of the suits, 53 people died after receiving it.

The 7/28/21 Wake Up Chat with the ‘Grok on Life with Liz.
Monday Morning Wakeup Chat with GraniteGrok – June 7, 2021
Common Sense Radio – Electric Cars Make No Sense