Why is NH Governor Sununu NOT UNDER INVESTIGATION? - Granite Grok
Skip to content

I do not write the following lightly. Especially in today’s political climate. But when faced with the burden of disturbingly apparent flagrant and excessive abuses of power at the highest levels of state government, we all have a moral obligation to question government officials.

October 13, 2021 marks a sad day in the history of NH. Nine Americans were arrested for no apparent reason at a public Executive Council (EC) meeting that was run by the Governor. I was there. I was deeply disturbed, and I reported on it here and here.

As people all around me were being removed and arrested by State Troopers for no apparent reason, I thought to myself, “this is what it must have been like in Nazi Germany in the 1930’s when they began to take people away.” It is why I have not, and will not, remain silent because history warns,

“The only thing necessary for the triumph of evil is for good men to do nothing.” – Edmund Burke

That is why the Governor must justify why nine Americans were arrested at his EC meeting. He also needs to explain why he ordered an army of State Troopers to be present, and why he is turning NH into a Police State?

There was an excessive number of 32 State Troopers that were visible during the EC meeting.  It was a disturbing and unnecessary show of force that borders on paranoia, and something that would be expected in Nazi Germany or Communist China – but NOT NH. 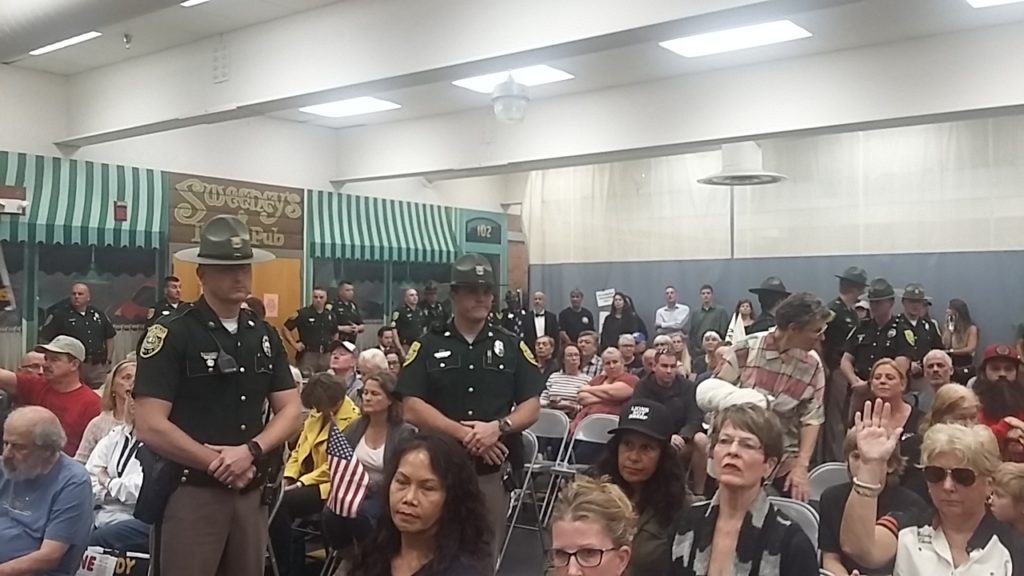 Listen to this eye witness, who was the first to be arrested without cause. He describes an additional FORTY TO FIFTY State Troopers who were hidden behind the back curtain just a few feet away. His statement amplifies concerns about the governor.

Did Gov. Sununu plan ahead to arrest those who have been vocal adversaries against his policies?

All counted, there was close to EIGHTY State Troopers in the room  There were EVEN MORE State Troopers OUTSIDE! For 150 American citizens! That is an abusive and oppressive show of force!

Nine peaceably assembled Americans were selectively arrested out of 150 who quietly turned their backs to him during an EC vote.

I have been warned by high level government officials the Governor is a vindictive SOB (their words, multiple people) – but I refuse to remain silent because there is too much at stake.

We need to know if the Governor abused his authority to wage war against those who have opposed his positions. That type of abuse of power is a disturbing violation of our Constitution, which protects our Rights of Free Speech, and to peaceably assemble.

“Congress shall make no law respecting an establishment of religion, or prohibiting the free exercise thereof; or abridging the freedom of speech, or of the press; or the right of the people peaceably to assemble, and to petition the government for a redress of grievances.”

NH is not China. It is not Russia, nor Iran, nor North Korea… yet. But it feels like that’s where we are heading. That’s why I raise questions and concerns against the advice of others who warn of severe retribution from the Governor.

What took place at the October 13, 2021 EC meeting is deeply disturbing. Quiet people who were acting respectfully were escorted out of the room and then arrested for no reason.

This 16 minute citizen journalist video gives an overview of the 10/13/21 EC meeting. It is worth watching.

I reviewed hours of video footage. I keep coming to the same belief; that Gov. Sununu ordered State Police into an awkward position of arresting his political opponents for no apparent justifiable reason. This must not be allowed to stand without an investigation of the Governor.

If you did not watch following video in one of the links above, it shows Gov. Sununu’s non-verbal gestures and text messages with others in the room during the EC meeting immediately prior to when the arrests began.

Keep in mind, the attendees did not disrupt the meeting. The meeting never skipped a beat, even while the arrests were being made.

Governor Sununu is on the wrong side of history. He owes NH citizens answers to the following questions.

Do you respect the Rights of your constituents to question your leadership?

Why didn’t you defend the Rights of your constituents when they were being arrested for no apparent reason?

Why did you order an excessive force of State Troopers to be present at the EC meeting?

Why were nine peaceably assembled Americans arrested at your EC meeting under your watch?

What laws were broken during your meeting to justify the arrests of those nine Americans?

Why do you believe you are empowered by the U.S. and NH Constitutions to order those arrests?

Do you consider the concerns raised above to hold you accountable for your actions to be “anti-government”?

The arrest of Americans for no apparent reason must not be accepted and normalized. Will you remain silent and do nothing, or will you seek the truth – however uncomfortable and wherever it may lead?

As you contemplate your answer, remember Benjamin Franklin’s warning that we have been given a Republic, if we can keep it.