I probably shouldn’t share this but it’s literally one of the dumbest things I’ve ever read in my entire life.  Erin Sagen, a supposed ‘culture journalist’ for NBC News, wrote an article that is so incredibly ignorant and stupid that it HAD to be written about and mocked.

The sub-title of the article alone let the world know just how bad it was:

Americans are in total collective denial about how lethal our car dependency is. We have to stop normalizing the suffering caused by cars.

NEWSFLASH: Cars don’t cause suffering, bad drivers do. As a former resident of Massachusetts, where drivers are known as ‘Massholes,’ I can tell you from firsthand experience, cars aren’t the problem, HUMANS are the problem.

The premise of the article seems to be that cars (inanimate objects until a human takes action to make them no longer inanimate) are bad, and we must stop depending on them to fulfill our basic needs of TRAVELING from point A to point B.

Clearly, the author doesn’t live in a rural area where cars are NECESSARY to function in life.

Yes, car accidents are horrible. Yes, they cause death and suffering but it’s not the actual CAR’S fault, it’s the human driving the car that is the problem. And of course, the author must bring up children and minorities because… I bet cars are also RACIST somehow: 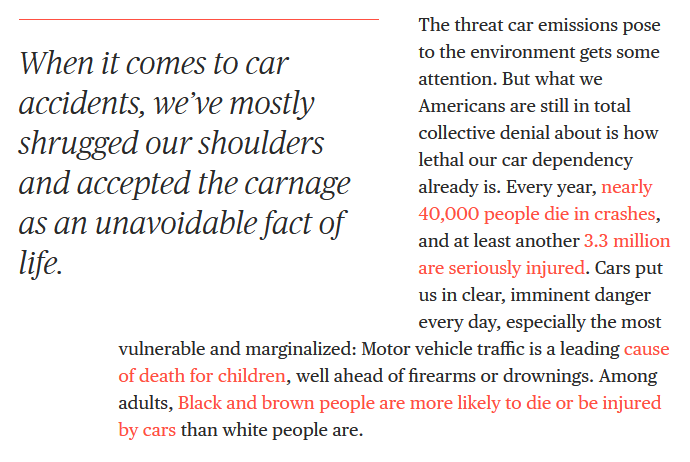 The author admits that cars have become safer over the years but then goes on to say:

It’s true that, with the exception of the past few years, cars general have become safer for drivers and passengers since the 1970s. But our rate of violence is still exceptionally high compared to other countries.

“Rate of violence.” Let that sink in. This author thinks an inanimate object is VIOLENT, not the human who is behind the wheel driving it, and of course, she blames BIGGER CARS as the most evil of violent offenders. The stupid literally BURNS.

The author is correct that most of us know someone who has been in some type of car accident. I, myself, have been in several. Most have been minor but I was once in a major accident on I-93 in Boston in which I was squished in between two large rental trucks in my small car (at the time) because a DRIVER cut off a truck driver who was driving a big rig.

I NEVER blamed the cars or trucks involved in the 5 car pile up, I blamed the Masshole who cut off the big rig driver: 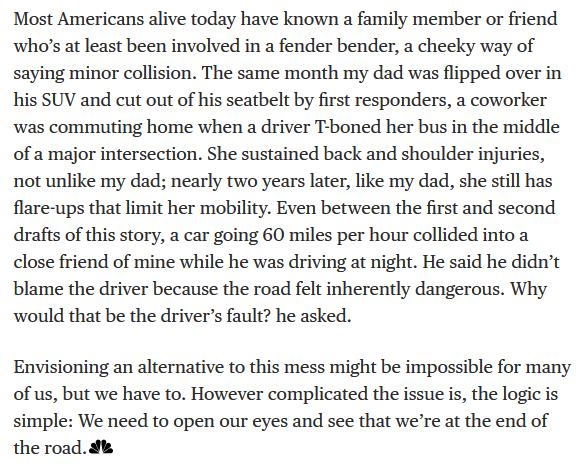 We “HAVE TO” find an alternative to driving cars. It’s clear this author has never stepped foot into somewhere that ISN’T a city. It’s obvious this author is clueless about how the rest of the country lives and doesn’t care that a majority of people do not rely on public transportation and must rely on getting themselves to where they want to go, on their own, using their ‘violent machines’ to get them there.

This article is reminiscent of all the gun controllers who blame firearms for the actions of humans. I never thought they would do the same for CARS.

Kimberly Morin is a political activist in the Granite State. She is a lifelong Independent who calls out both sides of the aisle when they screw up. She’s a weekly guest on the nationally syndicated radio show, Real Side with Joe Messina, and a frequent flyer on The Independence Gang.