So the​ “Esteemed” swamp gods have spoken from the pillars of the CDC and FINALLY admitted what WE,​ THE PEOPLE,​ knew​ – THE WHOLE TIME: ​the “magic” 14-day-quarantine was too long, vaccines never stopped the transmission ​or adoption ​of the virus,​​ ​and case numbers were​ and ​are​​ overreported.

The only person in D.C. who spoke these truths from the beginning is Dr. Scott Atlas, who was overshadowed by the evil minion twins, Dr. Fauci and Dr. Bir​x, and constantly ​skewered ​by the media.​​​ Wikipedia – who’ll never get a DIME from us portrays him saying: [Atlas] ​ “spread misinformation about COVID-19, such as theories that face masks and social distancing were not effective in slowing the spread of the coronavirus.​”​​

Atlas​ recently​ told Fox News he was ‘shocked’ President Trump never fired Fauci and Birx at the time. ​I’ve asked myself the SAME question as I’m sure many of you have. It was a ​tragic ​mistake​ to have two ​entire-​career ​swampaucrats ​allow them to taint the Trump​ Whitehouse with liberal — and CONSTANTLY CHANGING — hypocritical opinions. ​Curious and confused as to HOW, on earth, they got there, I researched their paths to The Trump WhiteHouse. In doing so, I stumbled upon a familiar name: Matt. Mowers.

We want to thank Jude Augusta for this Op-Ed. If you have an Op-Ed or LTE
you want us to consider, please submit it to Editor@GraniteGrok.com.

In a 2020 CNN article titled, ‘How Fauci and Birx got Trump to listen to the science,’ Matt Mowers is cited as being *THE* reason Dr. Birx received the top job in the West Wing.

I have heard Matt Mowers speak on the campaign trail many times this election cycle. He likes to talk about his work in the Trump Administration as a ‘Senior White House Advisor’, but conveniently leaves out ​– ​WHO ​– ​he was advising! ​He conveniently leaves out that he was the Chief of Staff and ‘friend’ to Dr. Birx in arguably the most corrupt federal agency in the whole Swamp – the State Department.

​Open your eyes folks, ​Matt got his campaign kicked off back “home” in Bergen County NEW JERSEY, New York, and DC. That was AFTER his interview where he stated: “Based upon on what I see & votes that were cast, the guy that got the most votes is sitting in the White House.” ​

Don’t elect a​ COVID Swamp Creature in the NH-01 Primary who played a direct role in​ effectuating​ the ​24/7 ​COVID​-Culture ​that has annihilated and divided America.​ We have a chance to beat Chris Pappas. Let’s not do it by electing a career bureaucrat​ who so desperately wants to escape from New Hampshire back to his peers in DC. ​ I leave you with his huge (anti-Trump) Birx endorsement below.​ 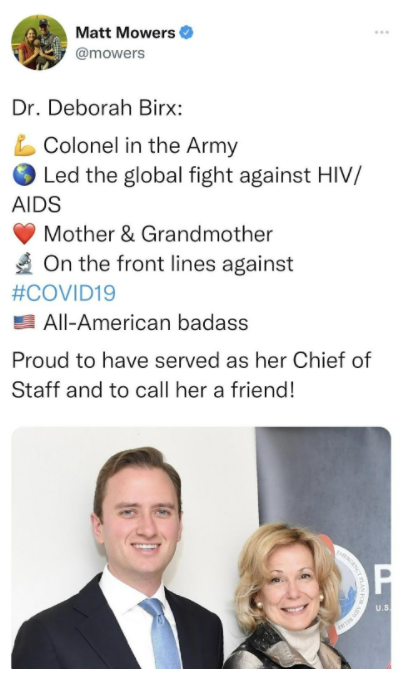