A Response to “Won’t be back until after anti-vaccine law is repealed” ... - Granite Grok
Skip to content

Regarding Dan Hamilton’s recent letter titled “Won’t be back until after anti-vaccine law is repealed.” I believe Mr. Hamilton exemplifies exactly what residents of New Hampshire absolutely despise about the yearly invasion of tourists from states like Massachusetts.

A man who is so self-important that he believes the “peasants” of New Hampshire are all just waiting with glee for their arrival and “money.” He believes his presence and wealth are so important that we, their serfs, are just chomping at the bit to change our state laws to make them feel “welcome.”

Well, I’ve got news for Mr. Hamilton: New Hampshire isn’t the state you thought it was. We in New Hampshire despise those who have your highly presumptuous, arrogant attitude. Your wealth doesn’t even come close to offsetting the net negative that you are to our towns when individuals like yourself grace us with your presence and lethally reckless Mass driving, “your Highness.”

We want to thank Brennan Christen for this Contribution. If you have an Op-Ed or LTE
you want us to consider email us at Editor@GraniteGrok.com.

Before you lecture us on our laws, perhaps consider passing one that teaches your residents basic driving etiquette they’re sorely lacking, so they stop regularly killing and maiming our residents on our roadways.

Unlike the People’s Republic of Massachusetts, here in New Hampshire, we believe strongly in protecting individual liberty. That’s why we regulate firearm ownership the least of any state, let our residents choose whether they wear helmets or seatbelts, and it’s also why we don’t mandate that the poorest among us pay car insurance.

We also don’t tax our residents to death either, unlike that joke of state “Taxachusetts” to our south.

Because of our pro-liberty ethos, New Hampshire has more liberties than any other state in the country.

Your “slave state” of Massachusetts doesn’t even come close, and that’s why you left your community to venture up here. Our permissive laws have made our state a great place to visit because they help our businesses thrive.

While your ilk in Mass was happily killing a third of your small businesses and stealing our money through the federal government to bail the few remaining out, we were expanding our businesses and opening new ones.

One must wonder whether Mr. Hamilton missed the massive “LIVE FREE OR DIE” signs, as well as the thousands of plates emblazoned with the same motto as he waltzed into a well-managed state like our that actually paves its highways and roads.

That “Live Free or Die” ethos just happens to include not forcing our own people to take the “latest and greatest” vaccines. The personal decision of each New Hampshire resident to decide to inject—or not to inject—a substance into their body is, regardless of what our pretentious wannabe overlords south of the NH state line want, our choice alone.

Given how Mr. Hamilton is likely already vaccinated, you must wonder why he continues to quiver in fear of New Hampshirites who aren’t vaccinated.

Goodbye, Mr. Hamilton, and please, don’t ever come back.

This letter was in response to an LTE to The Laconia Daily Sun. 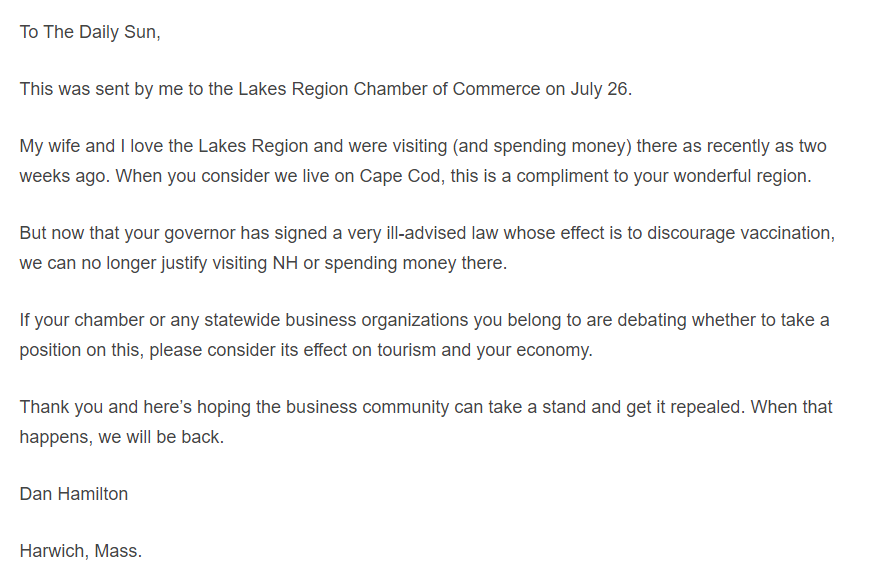