A friend of mine in the area found this in one of the apartments that his staff had cleaned out. Had no idea who Joshua Taylor was, didn’t know how long he had been there – figured that it probably was someone that had bunked in with one of the tenets.

But “Have the Power” and “Every VOICE counts” prove certain that this was no love letter from a flounder – it was a political thank you. Take a gander on the flip side: 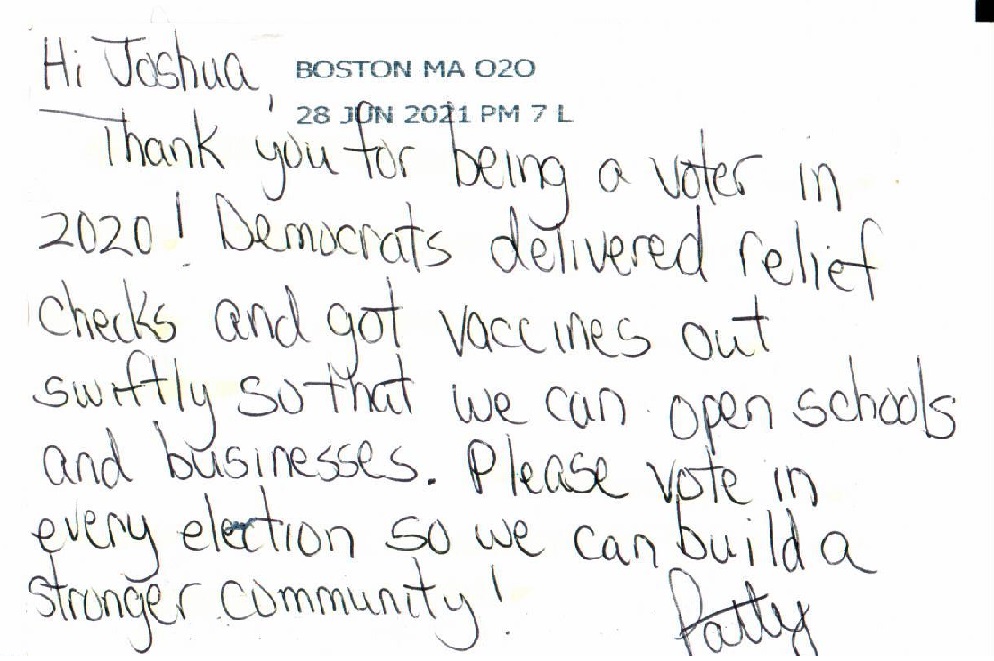 A Thank You and a campaign postcard. Pushed out by some Democrat (“Patty” – far neater writing than mine has ever been).

Given that it was sent to an apartment building, I’m betting that Joshua was a younger (youngish? younger than me?) guy – and receiving any kind of pat on the back postcard may have evoked “Hmm, how do I return the favor?” or something.

Or just left it on the floor.

The thought that went through my mind was “Yep, I sure never have received anything from the Republican Party like this simply because I vote. Even when I ran for office and won. Do you think that this “touch” might have made a difference within Joshua for the next election?

“…got the vaccines out swiftly”….yeah, there’s that ever-present taking credit from someone else that actually had done most of the work – and now Biden has dropped the ball. Getting the Jab is such a great idea he’s working to make it mandatory.

Just like what ISN’T in the “underneath” messages that went unsaid in the above: who is going to really pay for those relief checks? Whose supporters in the Democrat Party have fought to keep the schools closed (er, Democrats, right)? And opening business up just to have the Federal Govt artificially raise pay scales so they can’t get the employees they need to DO the business has been such a good idea, amirite (the $300-$600 Federal unemployment kicker that made it a no brainer to stay home instead of working – and then find out that your job is gone because your old employer went belly up?). Yeah, the REAL messages.

But as a “future elections are coming,” sounds real good on the surface – all that bragging.