Here’s a quick, mid-Friday Facepalm for you!. California! I know I could stop there and have made my point. Any point. But you’re here for snarky commentary. An opinion that exposes degrees of stupid only achievable by Democrats and California is their holy Ground.

California is the mad political scientist’s left-coast laboratory (that’s la-bore-a-tory, not lab-ra-tory). One of their experiments is greening the economy, but the only thing they have or will ever achieve is net-zero common sense.

Citing the need to reduce greenhouse gas emissions, California officials denied 21 fracking permits this week. What they didn’t mention was that the permit denials are more likely to benefit foreign oil producers than the environment. …

In 1995, nearly all of that oil came from within California’s borders and Alaska. Today, the majority of the oil comes from foreign imports as data from the state’s Energy Commission shows.

California has a lot of oil. It could (probably) be its own self-reliant global energy power and create thousands of those “good-paying jobs” about which we hear so much. Instead, it offshores an increasing amount of fossil fuel acquisition, and the foreign oil they are buying has a higher emissions intensity.

Related: California – Buy An Electric Car, They Said, But Don’t Charge it – There’s Not Enough Juice! 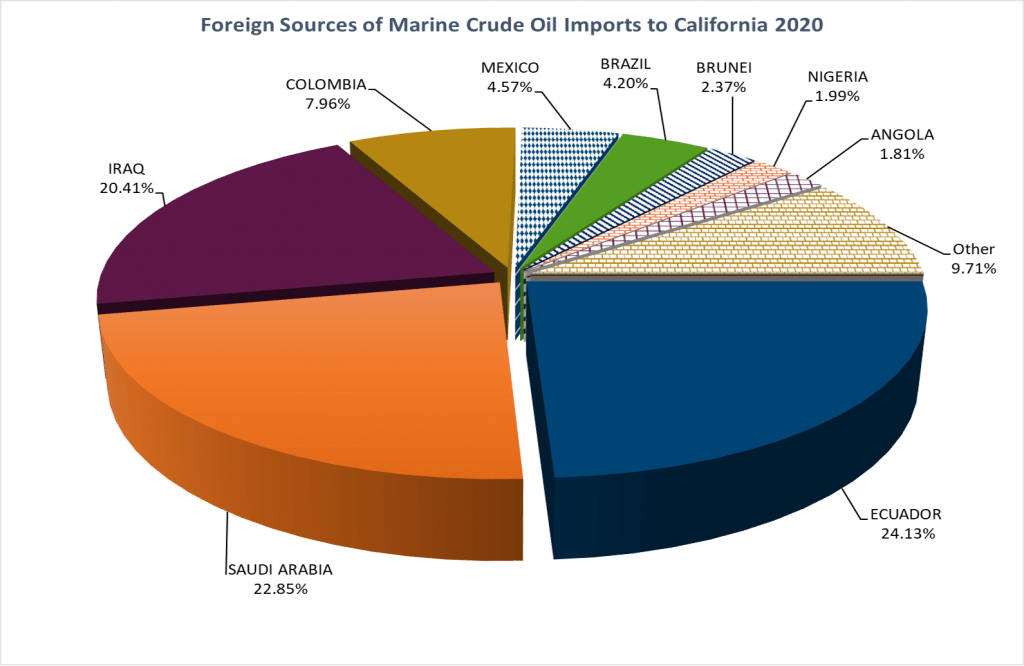 Gulf of Mexico Deepwater crude has one of the lowest carbon footprints on the planet. Rather than buy American, California prefers to get dirtier oils from places like these (Saudia Arabia is the only source with a lower carbon intensity than US Gulf crude).

The End is near, cleaner oil is nearer, but rather than create jobs in America, California is buying more foreign oil (from unsavory folks – some with little or no environmental oversight) that is “dirtier” or worse for the planet we are “buying it” to save

And the Biden Administration is following California’s lead.